What Would Billy Say? 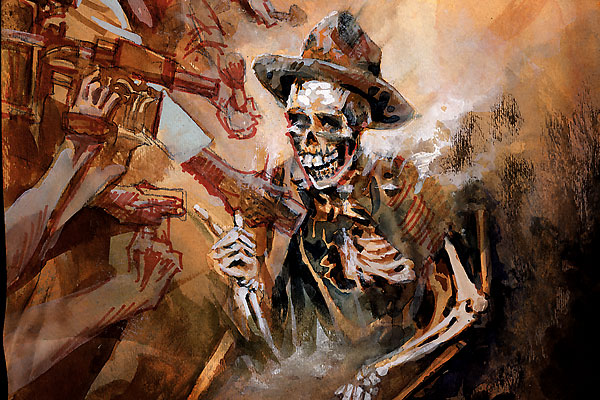 With the convoluted and contested efforts during the past decade to dig up Billy the Kid, we wondered what a Billy the Kid expert might ask the freshly dug up outlaw. And, more importantly, what might his answers be?

Q: Where were you born?

Q: What was your father’s name?

A: Henri Charrière. I used to call him Papi.

A: That German guy, Widenmann.

Q: If Dick Brewer was still alive what would you say to him?

Q: Where was that tintype photo of you taken?

A: I never had my picture taken in my life.

Q: Did Morris Bernstein say anything before he died?

Q: Just exactly what was your relationship with 17-year-old Paulita Maxwell?

A: We used to do needlework together. What are you, f***ing dumb or something?

Q: Do you think you should have got the pardon Lew Wallace promised you?

A: I got people working on that. Watch this space.

In our next issue, our intrepid reporter Mark Boardman tracks the bizarre efforts to dig up the boy outlaw and determine who actually is buried in the Kid’s grave.