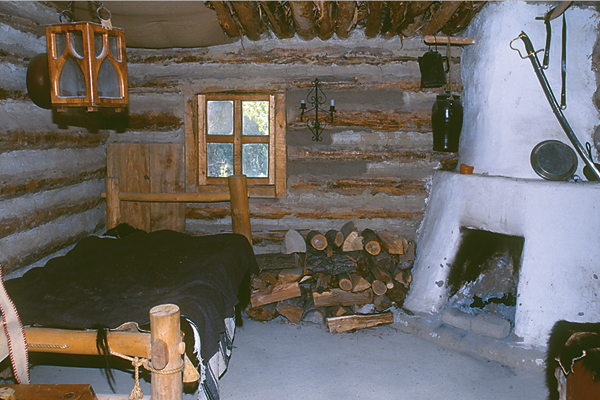 Before Doc Holliday and Wyatt Earp were even born, bolder men put their mark on the American West.

Known as fur traders and mountain men, these intrepid souls explored a wilderness that was known only to the Indians. Today, you can learn about their lives and exploits at a number of trading post replicas. And no, an Indian factory wasn’t a place where Indians worked. It was a government trading house that catered to Indians, and it was run by a licensed factor (as the traders were called).

Constructed by the U.S. Army in 1819, the fort was primarily a military fortification—although it had a trading house—and was an important stopping place for fur traders traveling the Missouri River.

Fur trader William Bent built this fort beside the Arkansas River in 1833-34 to cater to the Southern Cheyenne buffalo robe fur trade. In August 1849, Bent removed all of his stores from the trading post and blew it up, and then in 1853, he built a new trading post farther downriver.

Erected during the 1840s by fur trader James Bordeaux, this tiny trading house did most of its business with the Brulé Sioux. (The rebuilt trading post is part of the Museum of the Fur Trade.)

Mountain men Jim Bridger and Louis Vasquez built this trading post in 1842-43 on Black’s Fork of the Green River. The post primarily catered to emigrants on the Oregon Trail, although it also functioned as a fur trading post. Later, it was taken over by the U.S. Army.

Built in late 1805 by members of Lewis and Clark’s Corps of Discovery, Fort Clatsop primarily served as a winter shelter, but neighboring Indians regularly came by to trade for the few stores Lewis and Clark could offer.

To siphon the free trappers’ business away from the big fur companies, Nathaniel Jarvis Wyeth built this fort in the summer of 1834. Fort Hall eventually became a significant stopping place for emigrants on the Oregon Trail. By then, the Hudson’s Bay Company owned it.

Established in 1834 as Fort William by trader and former mountain man Bill Sublette, the trading post was known by several different names before the U.S. Army purchased it for $4,000 in 1849 and officially dubbed it Fort Laramie.

This military facility and Indian factory was built by the U.S. Army in 1808, but the fort was later abandoned because of Indian harassment during the War of 1812.

Built in the late fall of 1804 as winter quarters for Lewis and Clark’s Corps of Discovery, the fort also served as a trading house for the neighboring Mandans and Hidatsas.

This trading house was built in 1833 by the Hudson’s Bay Company in order to garner the Puget Sound fur trade and prevent visiting sea captains from trading with local Indians.

Built in the autumn of 1808 by William Clark—and originally called Fort Clark—this government-owned Indian factory operated on the lower Missouri River until the factory system ended in 1822.

The Russian-American Company established this trading post in 1812. The post colonists hunted and traded for sea otters and grew crops in order to supply the company’s trading outposts in Alaska.

Shortly after he took possession of his 50,000-acre Mexican land grant in 1839, John Sutter established this fort so he could protect his vast holdings, but it ended up becoming a trading hub for the Argonauts who came to California searching for gold.

Built in 1829-30 by the American Fur Company, the trading post served as headquarters for the firm’s Upper Missouri Outfit.

Belle Vue Point on the lower Columbia River was the chosen site for this Hudson’s Bay Company trading post, which served as headquarters for the firm’s 670,000-square-mile Columbia Department.