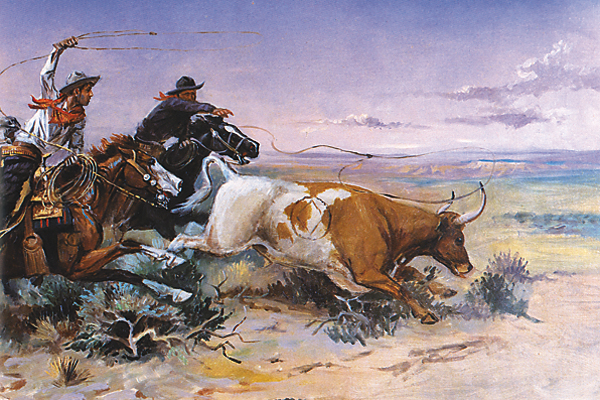 Some time back, my father and I herded a small bunch of cows onto the steep side of a mountain behind the small town of Chloride, Arizona. In the bunch were a gray maverick bull and a striped cow that for several years had eluded our attempts to brand them.

That day, we were determined they would wear an iron on their hide one way or another.

Dad was on one side of ’em and I was on the opposite. While we contemplated how best to tackle this deal, they made the decision for us. The bull blasted out of the bunch one direction and the cow the other. As fate would have it, the bull ran by me so I tried to cut him off as he went jumping and sliding down the mountainside. I remember the smell of his hooves as he slid on the rocks—they smelled like burning hair.

I caught up to him when he hit a little two-track mining road running up the side of a ridge. Just as I was about to pitch my rope, he tried to go up the steep hill on the left side of the road. I knew he wouldn’t make it.

He was almost above me by the time he reached the same conclusion and turned to head back down. My reflexes were faster back then, and as I swung my loop, I reached over my horse’s neck and I’ll be darned if I didn’t rope the bull by both front legs.

I flipped the rope over my head and started stacking my wraps on my saddle horn. When that rope came tight, all 1,400 pounds of that sharp-horned gray beggar smacked the road and he lay there like a shot dog.

I tied his hind legs together and left him to go see how Dad was getting along with his cow. When I arrived, he had her tied down and since it was about lunch time, we trotted to the truck, loaded up and drove into town to have a sandwich at the Tennessee Saloon.

We were about done with a burger and a beer when the door flew open, and a fellow with a ponytail stood there, wearing what was left of a pair of shorts and a T-shirt. To say that fellow was scratched up is an understatement. He looked like he’d finished third in a cat fight. He tried to talk, but all he got out between gasps were jumbled words about a crazy killer bull.

My dad and I just kinda looked at each other, finished our beers and eased out the door. When we got back to the bull, he was still tied down but I saw that he had moved a ways before falling over again.

You see, there’s something I forgot to mention earlier. When you tie a critter down with just its hind legs crossed, it can still get up and run, but when it tries to turn, down it goes again.

I looked around and about 30 feet ahead of us was a blind turn in the road where it wrapped around the end of the ridge. Straight down the hillside, I saw a trail of broken brush, lost backpack and torn clothes. Mr. Ponytail must have taken some long strides, going off the side of that steep sucker. You don’t ever want to run through oak brush, take my word for it.

As I see it, that hiker came waltzing around the corner, enjoying the sunshine, and there lay Mr. Bull with a heck of a mad on.

When Mr. Ponytail saw that snot-flinging, big-horned gray beggar jump up and charge, he split the scene and made his own trail. From the looks of things, he ran through, rather than around, whatever was in his way.

In the end, the bull finally got his hide burnt, while an ex-backpacker somewhere has a few scars of his own.

Come to think of it, I guess that day on the mountain I branded two mavericks.