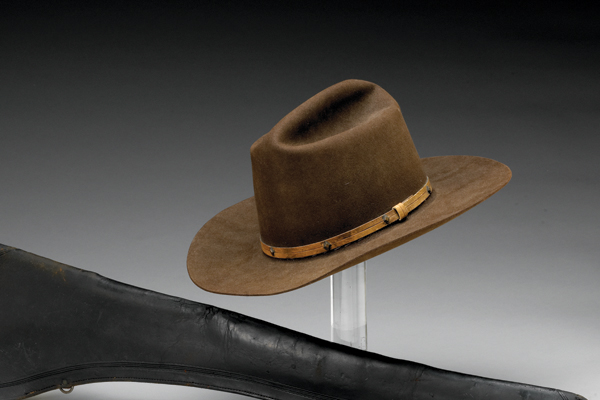 He was the Ringo Kid and the badman to Gail Russell’s angel.

He was Hondo and the Conqueror. He was a searcher and a horse soldier who rode where only the great ones go. He was Davy Crockett and the Man who shot Liberty Valance. He was a cowboy and a shootist dying of cancer. But among his over 170 movies, John Wayne was also Rooster Cogburn, the character for whom he received the Best Actor Oscar in 1970.

In True Grit, when the outlaw leader sneers at the old marshal’s threat to kill the four outlaws or see them hanged, he tells Cogburn, “Bold talk for a one-eyed fat man.” Cogburn yells the Western’s most memorable line: “Fill your hand, you son-of-a-bitch,” before he charges them with his reins in his teeth, firing both guns.

Chicago Sun-Times columnist Mike Royko wrote of this scene, “Foolishness? Maybe. But I hope we never become so programmed that nobody has the damn-the-risk spirit.”

Many of the characters John Wayne portrayed possessed such a spirit, which is why he was awarded a special congressional gold medal in 1980 that was inscribed “John Wayne—American.” Testifying in favor of presenting Wayne with the medal, Elizabeth Taylor had stated that “He gave the world the image of what an American should be.” When Wayne died of stomach cancer on June 11, 1979, a Tokyo newspaper echoed that sentiment with the headline “Mr. America passes on.”

In a Reader’s Digest obituary, Ronald Reagan wrote “Duke Wayne symbolized . . . the force of the American will to do what is right in the world. He could have left no greater legacy.”

Close to a quarter of a century after his death, collectors still strive to own a piece of Mr. America’s legacy. In San Francisco, California, business associate Gary Hess’ collection of John Wayne memorabilia sold for over $170,000.