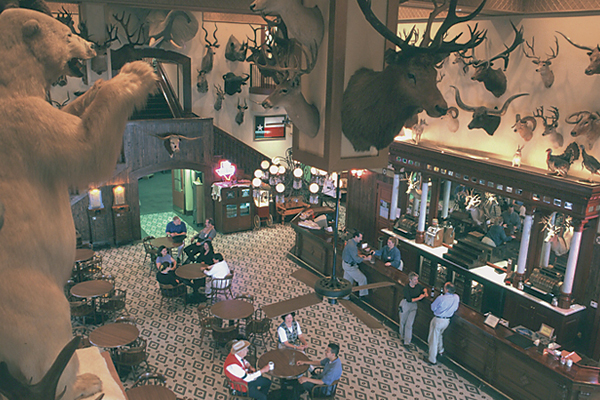 Big game hunters and Western history buffs strike gold at San Antonio’s Buckhorn Saloon and Museum, a delightful curiosity straight out of Ripley’s Believe It or Not.

Featuring a restaurant, a saloon with the original cherrywood bar, retail store and a nickelodeon game arcade, the Buckhorn, which was established in 1881, has relocated to its fourth and current address in the heart of downtown San Antonio, Texas, on Houston Street.

What makes this museum special is its collection of creatively mounted animal, bird and marine life, exemplified by an imaginative reconstruction of a partial wooly mammoth that is poised at the entranceway.

One has to look closely at the exhibits to identify what is truth, an aberration of nature or some darn fine tinkering with body parts. (Testament to the taxidermist’s art, the dwarf steer and two-headed sheep are real. I’ll stay mum about the rest.)

Back in 1881, owner Albert Friedrich invited all patrons “to bring in their deer antlers and trade them for a shot of whiskey or beer.” Thus began the world’s most unusual collection of horns, antlers and eventually animals.

Beautifully laid out in a 38,000-square-foot, historical, red brick building (including a convention area), the museum boasts an impeccably maintained world-class collection of 1,200 trophies representing over 520 species. Game enthusiasts and hunters will not only appreciate the bounty preserved here, but also the information about the weapons used in the kills.

What’s most unusual is that none of the freestanding, fully mounted species are protected by glass. You can look your quarry in the eye and see what the hunter saw. The Canadian wolf in particular, with its curled lips, is more than intimidating.

Items found in the museum’s Texas Hall include a fine collection of pre-1930 saddles; a turn-of-the-20th-century vignette about cowboy life; “Old Tex,” the world’s largest mounted Longhorn steer; and prized horn chairs designed for the original Buckhorn Saloon by Albert’s father, Wenzel. (The exhibit includes the buffalo horn chair Wenzel presented to Teddy Roosevelt while he was in town recruiting Rough Riders for the Spanish-American War.)

Move over Trigger—the gallery is also the home of silent cowboy actor William S. Hart’s stuffed horse. Lyrical paintings by resident artist Robert Harrison contrast such unusual artifacts with the beauty of the Texas landscape. At the other extreme, a unique collection of paintings created entirely from rattlesnake rattles made by Albert’s wife Emilie are in themselves worth the price of admission.

Credit for the Western exhibits goes to local historian and Colt firearms expert Kurt House, who helps curate a series of fine rotating displays. Well-researched and beautifully presented, the current “Frontier West” is a good example.

Manager David George admits that the museum encourages loitering. One can buy a drink in the bar and enjoy it while perusing the whole collection. George likes to brag that “the more you drink, the more you see.”

During your visit to the Buckhorn, be sure to save your appetite for some buttermilk pie, among other specialties of Chef Justin Bishop.

Voted San Antonio’s Best Attraction in 2002, the Buckhorn definitely puts the wild life back in the Alamo’s hometown.