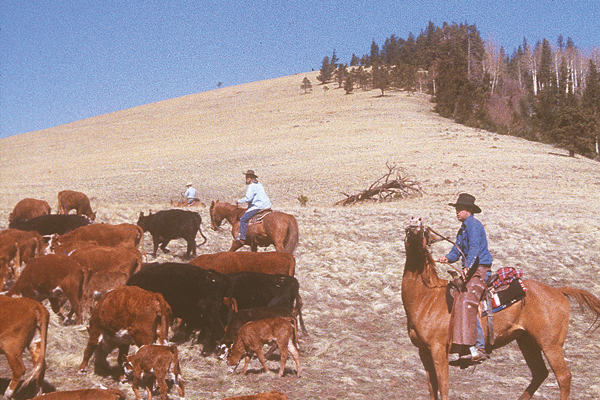 The good news is that the ramrod of this cattle drive is Roxanne Knight—not Tom Dunson.

Even better news is that I don’t see Asa Watts anywhere.

The bad news is that my thighs are chaffed, my backside raw and I’m dirtier than the Peanuts character Pig Pen on his worst day—and I won’t see a hot shower for an eternity.

People actually pay to do this? On VACATION?

Heck, yeah. Even before City Slickers, tourists were herding cattle, including those who know the risks and have seen Tom Dunson turn nasty in Red River and Asa Watts get even nastier in The Cowboys.

No Dunson characters are gonna catch up with me, though, so I’ve signed on with K5 High Country Adventure near Springerville, Arizona, for a 40-mile spring drive.

The K5 isn’t some posh dude ranch with cornball hay rides. Sprawling over 59 square miles, the Cinco Noches Ranch is a working outfit—accentuate the “working”—that trails Herefords (and a few longhorn leaders) from winter to summer pastures, and vice versa, over five or six days. If that doesn’t strike your fancy, the K5 also offers branding, roundup and other ranch work. Nothing’s staged, except maybe a few cowboy jokes.

Our drive starts on the Little Colorado River Plateau, at the Slade Gap on the K5 homestead. We cross a volcanic mesa to Bigelow Crossing, then head up the Grapevine Trail, which has been used since Arizona’s open range days. We even cross the 26 Bar Ranch, once owned by an Iowa-born cowboy better known as John Wayne, and push the herd down a steep trail to Deadman’s Crossing (I’m not making up these names), along the West Fork of the Black River, finally ending at the verdant White Mountains pasture that these dogies will call home until the fall drive.

Can a dude ranch be more authentic? (Okay, the chuck wagon isn’t a Charles Goodnight Studebaker, but a camper with more years and mileage than a Bonanza rerun.) The Knights—Roxanne, husband Galyn and sons Daric, Lance and Traegen—are a seventh-generation ranching family. They know cattle and horses, and they’re all folks to ride the river with. They sure ain’t dudes. Criminy, former actress Roxanne tossed Steve McQueen a beer in the opening of Junior Bonner.

Speaking of beer, that brings up the best news. Yeah, my body’s aching and my clothes need burning, but there will be warm grub, great stories and cold beer at the campfire tonight.

And the worst news? The drive will end soon, and I’ll have to return to the 21st century.

Cowboy logic: Since nobody saw Johnny D. Boggs bucked off his horse during this cattle drive, it didn’t happen.