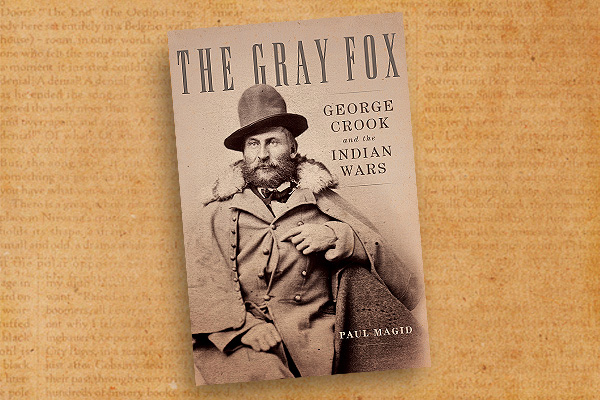 As historians mark the conclusion of the sesquicentennial of the American Civil War and the beginning of the American Indian Wars that lasted from 1865 to 1890, Paul Magid’s The Gray Fox: George Crook and the Indian Wars (University of Oklahoma Press, $29.95)

is the perfect military biography to bridge the two major conflicts that dominated United States history in the 19th century. In the second volume in Magid’s biography of Crook, the historian’s research is extensive and the bibliography and endnotes will quickly become extremely valuable tools for scholars studying and writing about Maj. Gen. George Crook, his life, military career and relationship with the Indian tribes and leaders in war and peace.

The book’s title, The Gray Fox, is the moniker the Apaches gave Crook because he “pursued his enemy with such single-minded ferocity,” symbolizing “a herald of ruin or ‘impending death’ in their culture.” The author’s research into Crook’s complex personality—which made him equally feared by his enemies, both Indian and American, and respected by his junior officers and Native leaders—is at the foundation of the biography and is expertly woven throughout the its conclusions on the general’s role in settling the West. According to Magid, what was “most intriguing [was that] his aggressiveness on the battlefield belied a compassion for his enemy that would come to dominate his dealings with his former foes during his later years.”

Magid’s expertly focuses The Gray Fox on Crook’s role in the Indian Wars between 1865 and 1877. With in-depth detail, he chronicles the veteran’s determined military style in pursuing victory over the Native tribes, and demonstrates Crook’s empathy for his enemies’ valiant defense of their homeland, while earning the respect of the tribal leaders he fought and defeated.  The biography focuses on three major campaigns: the Snake War against the Northern Paiute, Bannock and Shoshone of 1867-1870; the Yavapai War of 1871-1875 against the Western Apache and Yavapai; and, the Sioux War against the Northern Plains tribes in 1875 to 1877.  According to Magid, “These wars called upon the more aggressive aspects of Crook’s character and his skills as a military leader as he waged war in three separate arenas against dissimilar tribes inhabiting radically different terrains spanning the West.”

As in his first volume on Crook’s life, George Crook: From the Redwoods to Appomattox, Magid’s conclusions about the controversial military leader depend heavily on primary sources from the general’s peers and limited material left behind by the enigmatic, native Ohioan. Magid writes, “Crook left behind neither letters nor diaries that might have provided clues to the riddle of his personality.”

A graduate of West Point in 1852, Crook “eschewed the trappings and protocol of rank and even the uniform of an officer, [but] he harbored strong ambitions for recognition and promotion.” And although Crook published an autobiography before he died, the accomplished but modest general left his descendants and historians with limited personal details about his career—a challenge to generations of chroniclers who have attempted to give George Crook his proper due in the annals of American history. Fortunately, biographer Paul Magid pursued his goal of writing the most comprehensive history of the American warrior with the same tenacity that Crook pursued his enemies in war and defended them in peace.