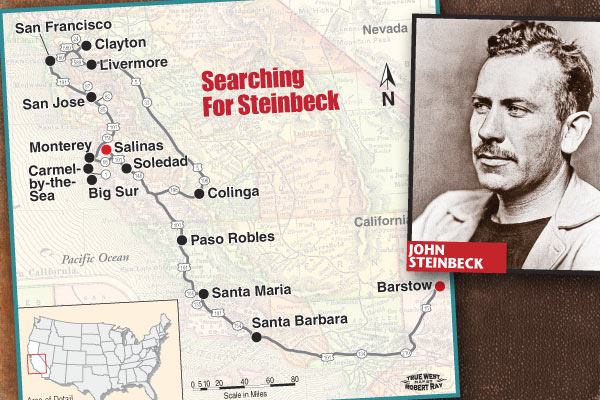 At a book signing a while back, legendary Western writer Max Evans (The Rounders, The Hi Lo Country, Goin’ Crazy With Sam Peckinpah and All Our Crazy Friends) was asked to name his favorite writers. The first one he mentioned was John Steinbeck.

Davy Crockett/Alamo historian William Groneman III also writes a lot about Steinbeck. I have a collection of Steinbeck first editions; next to Mark Twain, he’s my favorite author.

Aside from his The Red Pony (1937), Steinbeck is often overlooked as a Western writer, but when people ask me to name the best Western novel of all time, I’ll often push A.B. Guthrie Jr.’s The Big Sky down a notch to select The Grapes of Wrath. Hey, it’s about land, family and the last great Westward migration. Not only that, Steinbeck’s Travels with Charley covers much of the West, and it’s easy to find Western elements within In Dubious Battle, Of Mice and Men, East of Eden, The Wayward Bus. He also wrote the screenplay for Viva Zapata! (although I prefer Lifeboat).

Born in 1902 in Salinas, California, Steinbeck wrote mostly about his native state. This year marks the 75th anniversary of Steinbeck’s Pulitzer Prize for The Grapes of Wrath—he would later win the Nobel Prize for Literature and the U.S. Medal of Freedom—and while seeing Steinbeck’s stamping grounds, you can also soak up Old California history.

Bakersfield might have the Weedpatch Post Office from The Grapes of Wrath, but Barstow is close to the old state inspection center in Daggett, which Steinbeck also wrote about in his landmark novel. The station, built in 1930, was used until 1953.

For history buffs, nearby Calico Ghost Town, first a silver, then a borax—yes, borax—boomtown in the late 1800s, still brings in visitors. Credit Walter Knott of Knott’s Berry Farm for helping preserve this site in the 1950s.

I can’t find a restaurant that serves “soup, lettuce and string bean salad, pot roast and mashed potatoes, pineapple pie and blue cheese and coffee,” which Doc discovers in Santa Barbara in Cannery Row—I can’t even find Steinbeck’s son, Thomas, who lives here—but I can find just about everything else.

Chumash Indians and their ancestors were here 13,000 years ago, and the Spanish began exploring the region as early as 1542. Talk about history. The Carriage & Western Art Museum houses a bevy of carriages, stagecoaches and saddles; Casa de la Guerra, constructed in 1819-27 by one of Santa Barbara’s wealthiest citizens, became the political-cultura—social center of the pueblo; El Presidio de Santa Barbara was founded in 1782 and—even in pricey downtown—is now a state historic park; and then there’s the Queen of the Missions, Old Mission Santa Barbara, founded by a Franciscan friar, Fermín de Lasuén, on December 4, 1786, the day of the Feast of St. Barbara.

In fact, following Steinbeck takes you through much of Alta California’s mission country–La Purisima Concepción, San Luis Obispo de Tolsa, San Miguel Arcángel, Nuestra Señora de la Soledad, San Carlos Borromeo del Rio Carmelo. Keep those missions in mind if you stop at a California winery. After all, “mission grapes” pretty much started the wine industry here. There’s even a Steinbeck Wines—no apparent relation—in Paso Robles. Doc stopped in Paso Robles, too, as well as in Santa Maria, during his drive south from Monterey, though he was after burgers and beer, not vino.

King City brings to mind East of Eden, and Soledad might have you remembering Of Mice and Men and The Long Valley, but I’m making a beeline to the coast.

Historic Monterey was the setting for Tortilla Flat, Cannery Row and Sweet Thursday—not to mention the early second-season episodes of Walt Disney’s Zorro TV series, which Steinbeck did not write but I still love–while Flight was grounded in stunningly majestic Big Sur.

Steinbeck moved to the old capital of Spanish California in 1944, but he wasn’t the first writer captivated by coastal California. Robert Louis Stevenson arrived in 1879. In fact, many believe that Stevenson transported what’s now Point Lobos State Nature Reserve, on the drive south toward Big Sur, into Treasure Island.

Steinbeck would also frequent Carmel, where Mission San Carlos Borromeo de Carmelo features five museums. The church’s “crooked dome” became the inspiration behind the mission in last chapter of The Pastures of Heaven.

Monterey hasn’t forgotten its cannery heritage. The first plant opened in 1902—the year of Steinbeck’s birth—and the last sardine was canned in 1964. Monterey’s gem today might be the Monterey Bay Aquarium, which, some- where, must bring a smile to the face of Ed Ricketts, the marine biologist who collaborated with Steinbeck on Sea of Cortez and was immortalized as Doc in Cannery Row and Sweet Thursday.

On the other hand, San Francisco, home of Levi’s jeans, is more Dashiell Hammett territory (I even discovered a street named after that great mystery writer), but Steinbeck wrote a number of news-paper articles about the Dust Bowl transplants here, and few cities are so  diverse (Chinatown, Fisherman’s Wharf) and historic (Wells Fargo, Willie Mays, plus Wyatt Earp’s grave in nearby Colma).

Steinbeck never wrote about Old California’s most famous bandit—Walter Noble Burns did—but Joaquin Murrieta, “the Robin Hood of El Dorado,” makes a great deviation on the way back to Salinas. It’s still hard to strip away the myth of the bandit or patriot (depending on your point of view) who became a legend during the gold rush days, before he was killed (or not) by California Rangers in 1853.

You can drive through his country, and stop at a few markers around Clayton (where Murrieta worked as a vaquero in Contra Costa County before being driven into outlawry), Livermore (Murrieta’s Well, where he herded his mustangs) and Coalinga (where he hid out in the Joaquin Rocks and was allegedly killed).

Now I’m back in East of Eden country—Salinas.

The Steinbeck draw, of course, is the National Steinbeck Center, a $12 million museum that opened in 1998 and showcases the author and his work and preserves more than 40,000 Steinbeck papers and other items.

The old Carnegie Library can also be found in Old Town Salinas. In 1939, angry citizens burned copies of The Grapes of Wrath. That might explain why Steinbeck left California in 1945, exiling himself to New York, where he died in 1968.

“Tom Wolfe was right,” Steinbeck wrote in Travels With Charley. “You can’t go home again because home has ceased to exist except in the mothballs of memory.”

Steinbeck did come home, though. His ashes were interred in The Garden of Memories Cemetery in Salinas. And his memory and legacy linger on, side-by-side with Old California history.

Her father-in-law created “The Gun That Won The West,” but Sarah Lockwood Pardee Winchester left her own legacy.

The daughter of a Connecticut carriage manufacturer married William Wirt Winchester—Oliver’s son—in 1862, but when her infant daughter died in 1866 and Sarah’s husband followed in 1881, she fell into a depression and sought a spiritualist (or, as Hoyt Axton wrote in his song “Mr. Winchester’s Gun”, “a hoodoo”) to help.

Since Winchester weapons had killed plenty, Mrs. Winchester was told to move West and build a great house to silence those spooks. She found the perfect site near San Jose, California, in 1884, and went to work building.

She never finished—and she lived until 1922.

By then, the house had 160 rooms, 2,000 doors, 47 stairways, 13 bathrooms, six kitchens, 47 fireplaces, 17 chimneys, 10,000 windows, and nails carpenters didn’t finish hammering once they learned she was dead and they were out of work after almost 38 years of constant construction.

Now a California State Historical Landmark, the “mystery house” is open for guided tours, which might leave you reconsidering that remodeling job you’re planning.