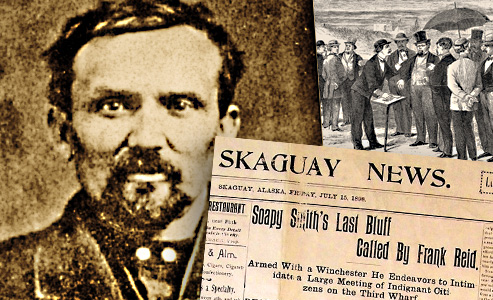 In the mid-19th century, an industrializing and expanding republic presented innumerable opportunities for artistes with the appropriate combination of skill and amorality to separate an unsuspecting soul from his money.

William Jones, a.k.a. Canada Bill, exploited those opportunities expertly, relentlessly and shamelessly, and with the unabashed admiration of his fellows. Indeed, if the favorable opinion of one’s peers is any measure of greatness, Canada Bill has got to be among the greatest of confidence men.

His game was three-card monte, and his genius was in playing the role of the guileless bumpkin so effectively that he routinely won large sums of money from purportedly sophisticated gamblers who thought they had spied an easy mark.

Born in a tent in Yorkshire to English Romani parents, Canada Bill demonstrated a youthful aptitude for cards and emigrated to Canada in his early 20s—probably sometime in the 1850s—and there acquired the nickname by which he would henceforth be known. He developed considerable expertise in three-card monte. In partnership with Dick Cady, he fleeced unsuspecting gamblers in Canada for several years before leaving for richer harvests south of the 49th parallel.

Three-card monte is a card version of the shell game. A dealer places three cards face down on the table, briefly showing one as the target or “money card,” typically a queen or an ace. The dealer then rapidly moves the cards, randomizing their positions, and challenges the opponent to identify the target, betting a sum of money on the outcome.

The con part involves the use of “cappers” (also known as “ropers” and “decoy ducks”), individuals in collusion with the dealer who persuade the unsuspecting of an opportunity to make easy money. To be successful, the con requires skillful sleight-of-hand, the soul of an actor, an intuitive understanding of human psychology, patience and sheer nerve. Canada Bill had all those traits.

In the United States, Canada Bill operated in New Orleans and the surrounding areas in Louisiana with several partners, notably George Devol, who wrote extensively about Canada Bill in his memoirs. They worked the riverboats and railroads, as well as the city itself, with Devol assuming the role of capper. Devol claimed Bill as a close friend, lauding his honesty and generosity—presumably referring more to his relations with his partners than with his marks.

Devol’s notion of honesty among thieves was curious indeed, for the relationship was not without its betrayals. On a steamboat on the Red River, Canada Bill and Devol conned a player out of $3,800; when Canada Bill split the proceeds with Devol, the con man claimed the pot totaled only $3,500. Devol later got back at his partner when he conspired to have a purported sucker secretly in league with Devol unexpectedly pick the money card. In another incident, Devol arranged to have a player win $2,500 from Canada Bill, but Canada Bill paid with a short pile of bills—a “road roll,” which Allan Pinkerton, the Scottish American spy and creator of the Pinkerton National Detective Agency, described as a “showy pile of bills of small denomination,” presumably with larger bills on the outside to conceal the true sum. The partners broke up after that.

During construction of the Union Pacific and Central Pacific Railroads, Canada Bill worked Kansas City, Missouri, and Omaha, Nebraska, and points in between in the company of “Dutch Charlie.” When the Union Pacific Railroad prohibited monte, Canada Bill tried to negotiate. In return for the exclusive right to three-card monte, Canada Bill offered the railroad $10,000 per year ($25,000 by some accounts) and a promise to work only commercial travelers from Chicago, Illinois, and Methodist preachers. His offer was turned down.

In 1874, Canada Bill moved to Chicago and, with two partners, opened four gambling establishments, apparently in collusion with the police. He made in the neighborhood of $150,000 in Chicago—a princely sum, in excess of $3 million today.

He squandered nearly all of his fortune. Canada Bill, like many of his profession, was careless with money. While he unfailingly won at three-card monte, he lost big time at short card games, such as faro and seven-up, which resulted in him dying penniless at the charity hospital in Reading, Pennsylvania, in 1877. Mason Long, a repentant drinker and gambler and one-time capper for Canada Bill, recalled Canada Bill drinking himself to death (Devol stated this was a lie).

Canada Bill offers a lasting legacy in several quotes attributed to him, perhaps erroneously. He is said to be the source of the following gems, which match his character: “A Smith and Wesson beats four aces.” “It’s immoral to let a sucker keep his money.” This last was quoted by Mike McDermott (played by Matt Damon) in the 1998 movie Rounders, about a high-stakes poker player.

Canada Bill is probably best known for his memorable comment after betting on a faro game he knew was fixed to cheat. Several versions of the incident exist, but they all end with a comment along the lines of: “I know it’s crooked, but it’s the only game in town.”

Canada Bill was buried in Reading. His Chicago friends, hearing of his demise, raised the funeral expenses and enough additional money to erect a monument. On the occasion of Canada Bill’s funeral, as his body was being lowered into the ground, one of the mourners believed that Canada Bill’s body was not, in fact, in the coffin. John Quinn wrote in Fools of Fortune that someone offered a bet of $1,000 to $500 that the body was not there, which no one took, and that a friend remarked “he had known Bill to squeeze through tighter holes than that.”

Everyone loves a good story, and what better way to conclude Canada Bill’s life than with a suggestion that the taker might have lost the bet? But news accounts of his funeral reveal that the lid was removed and the gambler’s body was in the coffin after all.  Even the monte king could not pull off the biggest gamble of all and cheat death.

Daniel R. Seligman is a retired engineer who lives in Needham, Massachusetts.