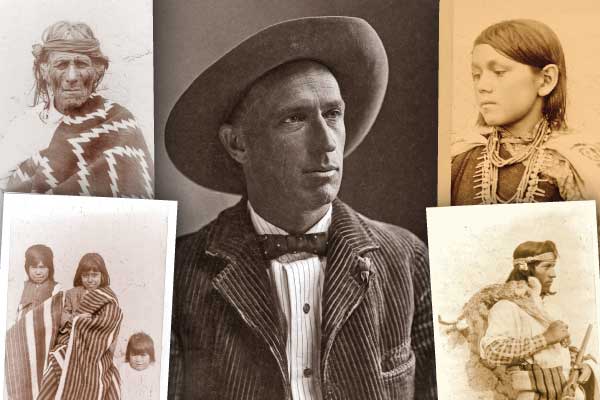 Charles F. Lummis was two years old when he experienced his first loss—the death of his mother from consumption on April 24, 1861, at their seaside home in Lynn, Massachusetts. She left behind her son and his two-month-old sister Louise Elma; their Methodist minister father; and a lifelong memory of his mother’s final whisper, “God, keep my little boy.”

Fearful as a motherless son, Lummis was home-schooled by his father, who sheltered him through much of his youth. Nonetheless, Lummis’s strong academics landed him in Harvard’s 1877 freshman class where he met fellow student Theodore Roosevelt.

It was a friendship for life when Lummis bucked freshman tradition by refusing to cut his hair short, offering to meet sophomores over fisticuffs. “Bully! It’s your hair,” admired Roosevelt, “keep it if you want to.”

He never graduated from Harvard due to growing freelance opportunities, a quick marriage to Mary Dorothea Rhodes in 1880, and in 1884, while working for a Cincinnati newspaper, he accepted an offer of a position at the Los Angeles Times. Accepting the job, Lummis made the journey on foot across the country, traveling 2,200 miles in 143 days during autumn and winter. His weekly dispatches chronicling the adventure would become his 1892 book, A Tramp Across the Continent, the second of his 16 books and it would inspire countless newspaper and magazine articles in the years to come.

Working long hours as the Times’ city editor, Lummis suffered a mild stroke, leaving his left side paralyzed, and in 1888 he moved to San Mateo, New Mexico, for recuperation. There he focused his freelance writing on American Southwest and Indian cultures and slowly recovered from his paralysis.

Lummis became a trusted friend of local Indian communities but his muckraking about corrupt political bosses and murder in San Mateo, led to his life being threatened, almost taken when a killer sent to his refuge in Isleta, shot him with a shotgun.

He survived and devoted his talents and life’s passion to the Indian cause. He returned to Los Angeles in 1894 after a year abroad in Peru. He became the editor of the magazine Land of Sunshine, which he renamed Out West. In 1901, he founded the Sequoya League, an Indian rights organization. Calling them the First Americans, he rallied against the forced education of native children away from the reservations, and the corruption preying on the reservation system. He later found support for his Indian cause from his Harvard classmate President Theodore Roosevelt.

Lummis died on November 24, 1928, in Los Angeles at his beloved stone home “El Alisal.” His last decades were dedicated to the historic preservation of the California missions, his Sequoya League’s pursuit of Indian rights and a greater awareness of American history before nationhood.