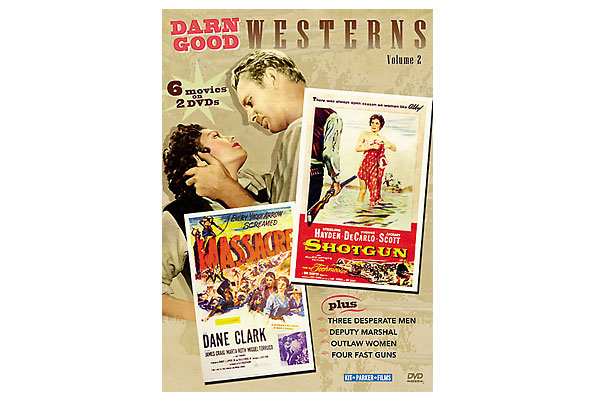 This year’s truth-in-advertising award ought to be given to  VCI for its DVD series of “Darn Good Westerns.” You’ll find no shouting and no lurid exaggerations, just six darn good Westerns on two discs, with a couple of modest extras. Grade-wise, these are B pictures, made on the cheap by writers and directors who knew how to get the job done fast and actors who knew there wouldn’t be any second takes.

Volume II leads off with the 1956 drama Massacre, which features Dane Clark as Ramón, the leader of a group of Mexican Rurales who are trying to find out who’s selling guns to the local Yaqui Indians. Turns out a husband and wife are peddling bad medicine to local farmers, who are justifiably irked that it’s making them blind. The husband is away, but his wife Angélica (Martha Roth) is home, minding the trading post. Ramón steps in to keep the locals from turning Angélica into stir fry, although he does let them burn down her store.

Meanwhile Ramón’s second-in-command, Ezparza (James Craig), is giving Angélica the glad eye, and she’s doing nothing to discourage him.

Here’s what’s fun about the picture: the Italian-born Roth owns the movie, and as sexy, ruthlessly amoral bad girls go, she’s tops. Producer Robert L. Lippert Jr., in a brief recorded commentary, tells us that he fell in love with her during the production, and he’s not kidding. Craig is also especially good—he possesses more than a little Jake Spoon (of Lonesome Dove). Add to that a Mexican campfire singalong, some funny moments among the men and a story that turns out to be about honor, courage and redemption in the face of impossible odds, and you have some serious Peckinpah foreshadowing in an otherwise unremarkable no-budgeter shot in Mexico with a Mexican crew.

“We’re on the wrong side of this circus,” says Deputy Tom Denton (Preston Foster) to his fellow deputy, brother Fred (Jim Davis), in 1951’s Three Desperate Men, the second of the six films. The Dentons are disheartened because they are expected to pony up the cost of burying a bad guy they killed. Tom’s declaration sets the tone for this tough Western about three Texas brothers who go bad because an overzealous California detective turns them into fugitives. Monte Blue plays Sheriff Pete Coleman, an old friend and new adversary.

One might imagine that a Hampton-scripted film about a Western town, Las Mujeres, which is run entirely by women, would be more fun, especially considering that the place is managed by Marie Windsor, who is up near the top of the all-time noir queens. Sadly Outlaw Women is a disappointment. The best thing the picture has going for it is the no-nonsense bouncer, Dora (Maria Hart), who judo-flips Jackie Coogan and strikes matches with her teeth.

The second disc begins with Shotgun, a Sterling Hayden movie from 1955, costarring Yvonne De Carlo and Zachary Scott. The Technicolor movie was shot in Sedona, Arizona, with good actors, a tight script and a director, Lesley Selander, who could shoot Oaters in his sleep (and possibly did). This would have been a perfect drive-in picture in 1955. He’s no Anthony Mann or Budd Boetticher, but his work is close.

Virtually the only interesting thing about 1949’s Deputy Marshal is that it’s the first film to use the “Garutso Balanced Lens,” which claimed to create a 3-D effect; it really just created a greater depth of field. I’m not sure why that drove Director William Berke into shooting so many close-ups, but the picture is giddy with directorial overkill. Nice seeing Dick Foran play the bad guy, though.

“When You Ride Into Purgatory, Say Goodbye To God,” the sign reads, extending a warm welcome to new visitors, including Sabin (James Craig, once again), who takes the place and the duties of a town tamer he was forced to kill on his way into town. In 1960’s Four Fast Guns, Sabin is hired by the good citizens of Purgatory to curtail the influence of Hoag (Paul Richards), who conducts his business from a wheelchair. Hoag sends four hired guns after Sabin, and how Sabin dispatches them makes up the bulk of the plot, minus a twist or two. The film is good, thanks to Craig, an interesting actor, Edgar Buchanan, who’s always fun, and Martha Vickers, who plays Hoag’s wife. Vickers did great work as Lauren Bacall’s addled younger sister in 1946’s The Big Sleep, and she turned in a few other choice performances, but this was her last film.