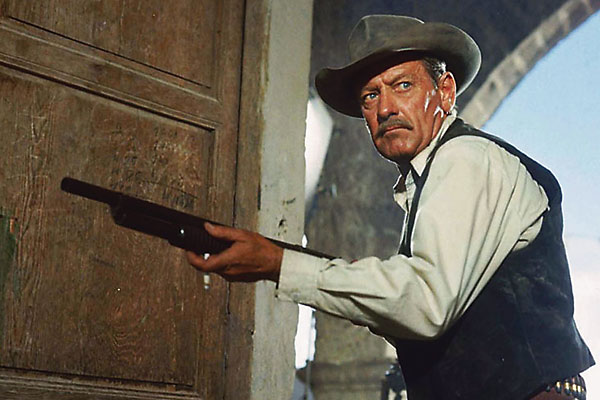 In November, the 40th anniversary of 1969’s The Wild Bunch was celebrated in grand fashion at the Million Dollar Theater in downtown Los Angeles.

The event drew a wide array of Sam Peckinpah fans and co-conspirators, including original cast members Ernest Borgnine, L.Q. Jones and Bo Hopkins, as well as Robert Ryan’s daughter, and a number of crew members who worked behind the scenes on the film.

Also on hand were Ali McGraw, who had appeared in two Peckinpah movies, The Getaway and Convoy, Isela Vega, who had starred opposite the late Warren Oates in Bring Me the Head of Alfredo Garcia, Donnie Fritts and Keith Carradine.

But more than that, the sell-out audience just underscores the fact that for a vast number of people, particularly those who experienced the film at or close to its date of release, The Wild Bunch was less a movie and more a life-defining event. In a documentary by Nick Redman featured on the current DVD edition of the film, Redman and a group of devotees—including Lupita, Peckinpah’s daughter who barely knew the director—head to Hacienda Cienega del Carmen, a dusty heap of winery ruins where Peckinpah shot the apocalyptic ending of the film. Apparently a steady stream of filmmakers, authors and fans—in the fanatic sense of the word—make regular pilgrimages to Parras de la Fuente and Cienega del Carmen, deep in the heart of Mexico, to visit the places where the movie, and the events in the movie, happened. The Internet is full of such scrapbooks.

Documentary filmmakers like to match shots of the movie, such as the march of the Bunch members on their way to the grand finish, against what remains at the site. Except for the pock marks of explosive charges that mimicked bullet hits and some new undergrowth, the area has probably changed very little from what it was before Peckinpah and his crew arrived. But the implication seems to be that the ruins—in fiction and in fact—have a poetic, tragic resonance, which may be what Peckinpah, the poet, saw in them in the first place.

Yet the question remains, what is it about the film that inspires such devotion?

The Wild Bunch seems to be at the heart of a generation gap. Kids who grew up watching Western movie and TV shows, who shared Matt Dillon with their fathers, crossed a needed line with Clint Eastwood, as he and the Western crossed the ocean. At the same time, Westerns in the 1950s were not as simple as people seem to remember them; Hoppy and the Lone Ranger were for kids, but anyone who studies the era knows that a lot of adult complexity was written into what was produced at the time. The exoticism of the Eastwood/Leone films, combined with what writers and commentators like to refer to as their new amorality, really offered kids a bridge to a newer take on some pretty old ideas. True, some of the Spaghetti Westerns are cold at heart, but not Sergio Leone’s—they may come in funny packages, but that stuff, all the way through Once Upon a Time in the West, is comfort food.

With that sensibility, some may regard The Wild Bunch and Sam Peckinpah’s earlier feature, Ride the High Country, at opposite poles, straddling a decade; the latter picture as a tribute to the Joel McCrea-Randolph Scott tradition of classic Westerns, and the former as a cynical revision of the form—harder, more violent, less adolescent.

At heart, though, the flicks are all the same. The Leone and other Spaghetti Westerns, the revisionist Westerns, Butch Cassidy and the Sundance Kid, Ride the High Country and The Wild Bunch, the rash of Biker pictures, which led to The Born Losers and Billy Jack—these Westerns may be dissimilar in style and time, but not at their core. The great gesture at the end of The Wild Bunch, the fantastic carnage that inspired so much rancor from traditionalists, was distinguished from similar moments in The Alamo and other earlier pictures only by the grace of Peckinpah’s eye—his zooms and slo-mo and editing. In essence, Peckinpah took the heart-wrenching horror of all that killing and made it beautiful; he had the will to give the audience what they had always wanted, what he had always wanted. The cold wind that had crept into the John Wayne-John Ford character through The Searchers and The Man Who Shot Liberty Valance was the abyss that Pike and his gang are determined to avoid. They are family. The Wild Bunch is actually very far from cynical.

Howard Hawks, when asked about his thoughts on The Wild Bunch, said, sounding uncharacteristically like the kind of geezer he never really was, that he could kill 20 men in the time it took Peckinpah to kill one. But Hawks was doing in Scarface in 1932 what Peckinpah was doing in 1969. The truth is, Hawks was not giving the picture the thought it deserved. Being the competitive bastard the director always was, Hawks was disinclined to give Peckinpah his due. I wish someone had asked John Huston what he thought about the picture.

Part of the romantic value we attach to the film has to do with redemption, but, really, the Bunch doesn’t seem to be seeking grace. The members are often described as killers, but they are never without honor or pride or humor; we never see them as bad men, anymore than we see Butch and Sundance as bad men.

Some viewers misunderstand the scene in which Pike and the Bunch set out to retrieve Angel—that these men know they are going to their death. I contend that they are determined to take some kind of action, or pay some kind of price, but that Angel’s death is actually a shock. The attack on Gen. Mapache and his men is completely unanticipated; it just happens. Once it starts, it’s go-for-broke.

At the end of the film, we understand that Deke Thornton, Robert Ryan’s character, is the one who needs to find a way back, to be healed. He’s been cut out of the herd; he is with the ants when he belongs with the scorpions. Thornton finds grace and redemption through the death of the Wild Bunch, and he wasn’t even there. Yet we see the movie, and the Bunch, through his eyes, even at the end, as he watches from afar. If Dutch (Ernest Borgnine) is the conscience of the group, Thornton is its heart.

Peckinpah’s name is probably not growing larger over time, but his legacy has grown richer and his myth is cleaner and less cluttered as we forget the later films he made that betrayed the promise of his best works, movies such as Convoy, The Osterman Weekend and The Killer Elite (although I predict even those films will eventually increase in stature).

The hold that Peckinpah continues to have over his fans is due to our recognition of his tremendous and uncommon artistry. We gain a deeper understanding of the way life sometimes works out when we see where his pain drove him. We perceive Peckinpah more clearly every time we watch his films, from the best to the worst; he was that powerful an artist.

Peckinpah was 59 when he died in 1984. Most of the people who revere him are near, if not over, that age today, and in no danger of that kind of apocalyptic burn out. Redemption is his legacy, not for the Bunch, but for the observers.