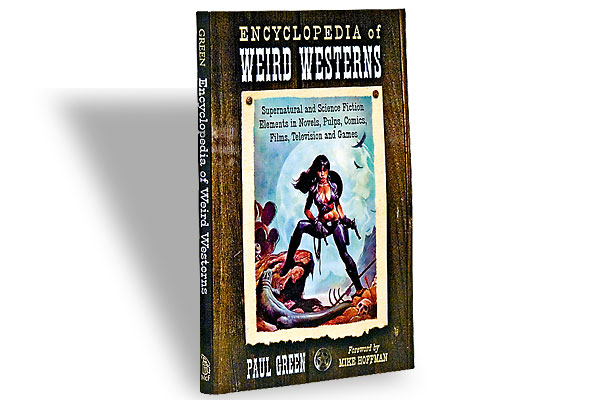 The complete title of Paul Green’s book is Encyclopedia of Weird Westerns:  Supernatural and Science Fiction Elements in Novels, Pulps, Comics, Films, Television and Games, which helps to explain that Green’s book offers all-encompassing coverage. Once you actually start turning the pages, you will find out just how deeply embedded weirdness is in the history of the Western.

Green has written books about the TV series The Virginian and collaborated on a biography of the late Pete Duel (Alias Smith and Jones). His work as a comic book artist explains all the comic references, but the book is loaded with notes on Westerns in every strata of pop culture—books, serials, movies, short stories, radio shows, anime and manga, and long-forgotten TV series. Wherever and however the Western appeared, its creepier cousin was always close at hand.

Green breaks down each entry in the book using different coded designations that he explains in the preface.   Westerns that involve the use of ghosts, monsters, demons, angels, zombies or other supernatural, horror or fantasy elements are labeled with a “WW,” for Weird Western. Other categories are Weird Menace Westerns (WM), Science Fiction Westerns (SFW), Space Westerns (SW), Steampunk Westerns (SPW; think 1999’s Wild Wild West) and finally Weird Western Romance (WWR). No, Marlon Brando and his horse in The Missouri Breaks doesn’t qualify as WWR; that’s an entirely different kind of weird.

Green has done a stunning amount of research, and he’s no snob—William S. Burroughs shares space with Huckleberry Hound, and if there was a leprechaun in an episode of Bonanza, it’s included here, along with the original airdate, cast and production credits. Descriptive text and opinions are kept to a minimum, but lengthy analyses can be somebody else’s book.

Green has also provided a handy reference index, bibliography and appendix, which are too often missing from books of this sort.

More important, Green has done the Western genre a great service.  By citing so many examples, he shows that, opinions to the contrary, the Western is not inherently conservative. The first important Gene Autry role had him fighting a futuristic subterranean civilization. Even established classics, such as The Searchers, have some “weird” in them.  The very first Western Clint Eastwood directed, High Plains Drifter, is often described as a supernatural Western, as is Pale Rider, and both of them are included in this book.

Green is specific in his definition of “weird,” which is absolutely necessary, because one might find some Westerns as oddball or bizarre, even Gothic (like Eastwood’s The Beguiled), but which don’t contain any hint of the supernatural or any Science Fiction elements.

In a subsequent edition, Green might consider including: Dwight Yoakam’s South of Heaven, West of Hell; the cosmic kung-fu Western Circle of Iron; Thunderheart; Eyes of Fire; Dead Birds; the amazing Thai Western Tears of the Black Tiger; as well as Ron Howard’s The Missing (and the book that inspired it, Thomas Eidson’s The Last Ride). Other contenders include the recent Korean epic The Good, The Bad, and the Weird, the cable-available High Plains Invaders and one of the most bizarre Westerns of all time, The Godmonster of Indian Flats (available on DVD from SomethingWeird.com, but don’t mistake this for a recommendation).

By the time Green revises his text, if ever, we’ll have seen the upcoming movie versions of Cowboys and Aliens, Jonah Hex and probably a half dozen more Zombie Westerns.

All in all, it’s a pretty good time to be weird in the saddle.