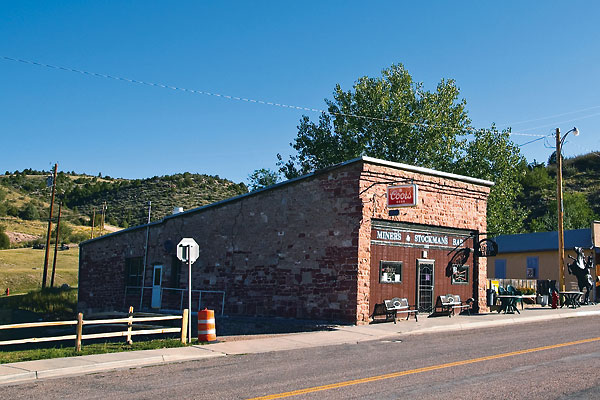 Born in Missouri in 1856 Martha Canary came west with her family, spent part of her childhood in the Montana gold fields near Virginia City and Nevada City, and came of age in Utah following the death of her parents (her mother in Montana, her father in Utah).

She soon struck out alone (leaving behind at least two siblings). She may have spent time around Fort Bridger, and in 1869, she was in the coal mining/railroad town of Piedmont, in extreme western Wyoming. She worked her way east (perhaps doing menial labor, possibly as a prostitute) stopping in towns such as Rawlins and Laramie before eventually reaching Cheyenne.

Started as an end-of-tracks town by the Union Pacific Railroad, Cheyenne endured after the tracks were laid farther west. By the time Martha arrived in the early 1870s, it was the Territorial Capital of Wyoming where the legislature had granted suffrage to women, along with the right to hold office and serve on juries. Cheyenne was also becoming a cowboy capital serving cattle trails from Texas pushing herds onto the Northern Plains. It also had a military presence, following the establishment of Camp Carlin (later Fort D.A. Russell; now Warren Air Force Base).

Cheyenne is where I take up the trail of Martha Canary, beginning with an overnight stay at the Nagle-Warren Mansion, the home of a cattle baron in the days when Martha Canary was first in Cheyenne. When in Cheyenne, it is always worth your time to visit the Old West Museum at Cheyenne Frontier Park and the Nelson Museum of the West.

The Cheyenne-Deadwood Trail came to quick prominence after men traveling with Lt. Col. George A. Custer found gold in the Black Hills in 1874. Like others in the region at the time, Martha Canary traveled the first leg of its route from Cheyenne to Fort Laramie. For a time she worked at the road ranch six miles west of Fort Laramie operated by Adolph Cuny and Julius “Jules” Ecoffey.

Exactly when Martha Canary came by the moniker Calamity Jane is not certain, but men along the Union Pacific rail line and in the military knew her as Calamity in the 1870s. She was at Fort Laramie in 1875 when the Black Hills Expedition under direction of Walter Jenney and Henry Newton organized. Their party was established to determine the quality and quantity of gold in the Black Hills, charged with adding detail to the Custer reports of the previous year.

“Anybody with a blue coat and brass buttons could catch Calamity,” wrote Valentine T. McGillycuddy in the 1920s. The doctor had worked as a topographer-cartographer with the Newton-Jenney Black Hills Expedition. During her time at Fort Laramie, Calamity Jane encountered lots of blue coats and brass buttons. Even today you will find them at the fort with larger numbers in evidence during major event weekends such as Fourth of July and other living history military weekends held during the summer.

Jane was wearing spurs, chaps and a sombrero as she strolled across the parade ground at Fort Laramie on May 20, 1875, when Dr. McGillycuddy first saw her. He was with Col. Richard I. Dodge, Henry Newton and Horace Tuttle at the time. When  the doctor asked about the girl, Dodge identified her as a “regimental mascot” who “didn’t know the meaning” of the word morals.

As the scientific party departed from Fort Laramie, an uninvited Calamity worked with the civilian teamsters. Acting Assistant Surgeon J.R. Lane provided one of the early, detailed accounts of the female teamster when he wrote in the Chicago Tribune on June 19, 1875, “Calam is dressed in a suit of soldier’s blue, and straddles a mule equal to any professional blacksnake swinger in the army.” He added, “Calamity also jumps upon a trooper’s horse and rides along in the ranks, and gives an officer a military [salute] with as much style as the First corporal in a crack company.”

Thomas C. MacMillan, writing for the rival Chicago Inter-Ocean, noted her “reputation of being a better horse-back rider, mule and bull-whacker and a more unctuous coiner of English, and not the Queen’s pure either, than any man in
the command.”

McGillycuddy himself said she was the “only woman in the party, dressed in soldiers clothes, rode a horse astraddle, could drink and swear ‘like a trooper.’” He later wrote she was “something like Topsy in Uncle Tom’s Cabin, she was not exactly ‘raised she growed.’”

The Black Hills Expedition followed the route that would become famous and well-traveled as the Cheyenne-Deadwood Stage Road. Colonel Dodge and the scientific party headed north from Fort Laramie, established Camp Jenney, not far from the present-day town of Newcastle, and then explored the Black Hills. While a similar route would take me on Highway 85 through Lusk and on to Newcastle, I instead divert to some new country. I take U.S. 26 west to Guernsey and then Highway 270 north to Hartville to go to the Miners & Stockman Bar for the best cheeseburger I’ve had in many a year on the road. (Warning: These burgers are BIG! I ordered the small one, but some guys traveling with me ordered the double and had a difficult time consuming the entire burger.)

From Hartville I drive north to U.S. 18/20 and then turn east to Lusk before rejoining U.S. 85 and continuing north to Newcastle. Calamity spent time here tending wounds and ailments, and mending clothes for the men. She also hunted, bringing deer and antelope to camp for shared meals. “She staid [sic] with us all summer and returned with us to Laramie in the Fall,” Dr. McGillycuddy wrote. “She was a typical frontier camp follower, a type by herself, loud and rough in her ways, but kind hearted, always ready to help or nurse a sick soldier or miner, and ready to go on a spree when necessity required or opportunity offered.”

Dr. McGillycuddy, the man responsible for charting the major features and drawing some of the first maps of the Black Hills, would name Calamity Peak for the intrepid female.

The Black Hills appealed to Calamity, and she would spend much of the remainder of her life in the area, visiting gold towns such as Custer City, Lead and Deadwood, as well as the frontier military post at Camp Robinson (later Fort Robinson).

After a visit to the Anna Miller Museum in Newcastle, I turn east taking U.S. 16 to Custer then Highway 89 south and U.S. 18 east to Hot Springs. This is a good place for an overnight stay and a chance to enjoy the mineral swimming pool. Then I take Highway 71 south to Crawford, Nebraska, and Fort Robinson State Historic Park, a location visited by the Black Hills Expedition in 1875. It later became the site of the Red Cloud Indian Agency and also a military fort that remained in service from the Indian Wars period through WWII.

After time to enjoy Fort Robinson (one of my favorite places in the West), I steer the Subaru east on U.S. 20 and drive to Chadron where I turn north on U.S. 385 and travel back through Hot Springs and Custer to Hill City and Deadwood. You’ll find much to explore in this area of the Black Hills ranging from the ongoing work to carve the Crazy Horse statue out of granite, to the faces of the four presidents at Mount Rushmore, to Custer State Park with its buffalo herds.

When Gen. George Crook’s troops traveled east in late summer of 1876, in the aftermath of the major battles with Lakota and Cheyenne Indians at the Rosebud and the Little Bighorn, the command entered present-day North Dakota and headed south. The soldiers engaged in a battle at Slim Buttes, endured a torturous march, survived on horsemeat and finally reached Crook City, South Dakota, where Calamity Jane and others with supplies met the troops.

Dr. McGillycuddy wrote in his journal “our old friend Calamity” who had “blossomed out as a fully equipped border scout, beaded buckskin trousers, blue shirt, broad brimmed hat, winchester rifle, mounted on a bucking broncho, with a supply of fluid ammunition in the saddle bags” arrived with the soldiers and relief supplies.

Those two kicked up their heels in a schottische when Crook’s men reached Deadwood. This town had been born during the gold rush to the Black Hills, and became a Mecca for people seeking wealth, excitement and adventure. Heck, in some respects, the town hasn’t changed an iota from those days. You’ll still find saloons with good whiskey, restaurants like Jake’s with fine food and a table on which to place your bets.

Of course the person most associated with both Deadwood and Calamity Jane is James Butler “Wild Bill” Hickok, who arrived in the community with a host of other characters, spent his time gambling—no doubt where he met Calamity who also hung out in the gambling dens—and was gunned down in 1876 and buried in the town cemetery.

When Calamity departed from Deadwood, she returned to Montana, where she had spent part of her childhood. She was in Miles City in February of 1882. Later she lived at Graveyard Bottom west of Miles City, before moving on to Billings as the Northern Pacific Railroad laid tracks toward the west. During this period in Montana, Calamity gave birth to a son, whom she and newspapers called “little calamity.” The baby did not live long, and Calamity moved on, eventually living in Livingston, Lewistown and Missoula. She was a rolling stone, and Montana did not claim her for long.

For a time she became involved with John “Liver-Eating” Johnson in the Great Rocky Mountain Show, a traveling Wild West show. By the latter half of the 1880s she was farther south, living and, according to some accounts, working as a prostitute  in towns along the Union Pacific Railroad route in southern Wyoming, including Rawlins, where the Carbon County Museum has a small display dedicated to her time in the community.

In 1887, Calamity again experienced motherhood with the birth of her daughter Jessie, but this rough-and-tumble woman did not become domesticated. She continued to move about the West, sometimes with her daughter and other times without the child. Sorting out details of Calamity Jane’s life is a task for folks who like twists and turns in a story as she certainly didn’t light long in any one place.

Leaving Deadwood behind, I head west on Interstate 90 across northeastern Wyoming into Montana, heading to Virginia City. Calamity Jane lived here with her parents after they first followed the gold fever to the region. Little has changed from the days when she was here. Much of both communities are now managed by the Montana State Historical Society, and you will find museum-style displays as well as living history opportunities in the everyday businesses that still operate. Cut the dust with something cold to drink at the Bale of Hay Saloon, or find some new duds at Rank’s Mercantile. If you like the Old West, you’ll love Virginia City.

Calamity herself bounced around the region, finally returning to the Black Hills, where she died in Terry, South Dakota, on August 1, 1903. She was buried in the Mount Moriah cemetery in Deadwood, next to Wild Bill Hickok.