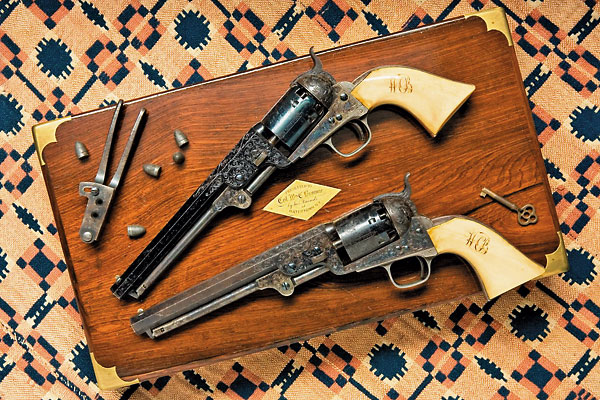 Many people have items at home, often tucked away or somehow otherwise forgotten, that could be worth more than gold.

Anyone who has watched Antiques Roadshow on PBS has seen people who brought items from their home, knowing little or nothing of an item’s true worth, only to discover it is of considerable value. Such was the case with Sharlene Perez, who attended an appraisal clinic held by antique arms dealer Greg Martin on June 12, 2009, in New York City.

As she sat down with Martin, she opened her heavy, wrapped parcel, revealing a beautifully varnished wooden case, trimmed in brass. With decades of dealing in antique firearms, Martin was immediately attracted to the case. He knew of the possibility of the treasures that might be found within it. What piqued his interest even more was a hand-engraved inscription on the lid in a diamond-shaped plaque, which read, “Presented to Col. Wm. C. Browne by his friends at Watertown, N.Y.”

Martin was not to be disappointed. Inside was an exquisite pair of engraved, monogrammed and ivory-stocked Civil War presentation Colt 1851 Navy percussion revolvers, along with accessories. As he studied the guns with their Gustave Young-style of floral and scroll engraving, silver-plated back straps, wolf’s head motif hammers and one-piece ivory stocks with “WCB” monograms on each, Martin asked Perez if she knew the value of the revolvers. “$25,000?” Perez answered. “Five or ten times that,” Martin replied. “I’d estimate between $150,000 to $250,000.”

A surprised and excited Perez explained that the guns had been stored in her closet for around 30 years. They were a gift to her late husband, Dr. Goltran Perez, an internist who passed away 14 years ago, and were probably a gift from one of his many friends, possibly as payment for medical services. Although he wasn’t a firearms enthusiast, he did admire the Colts. After his death, she put them away and pretty much forgot about them. One day, she took them out and read the inscription on the case lid. She realized then that the Colts might be valuable, but she was stunned by Martin’s overwhelming estimate.

The 1851 Navy Colt is a much sought after arm that also saw heavy use in the pre- and post-Civil War West. They were favorites during the California Gold Rush and with later frontiersmen such as James Butler “Wild Bill” Hickok, John Wesley Hardin, Frank and Jesse James, and other Wild West notables. The Colts brought in by Perez were once owned by Col. William C. Browne, commander of the 35th New York Infantry, which entered Federal service on June 11, 1861, and were known as the Jefferson Grays. Two companies, A and E, came from Watertown. The regiment served in building defenses in Washington, D.C., and fought in the Civil War battles Second Manassas, Antietam and Fredericksburg, before they were mustered out on May 18, 1863.

Browne’s Colt Navy revolvers were in exceptionally good condition, retaining most of the bluing on one gun, while the second arm—probably carried by Browne in service—still had about 20 percent of its finish. Both revolvers retained most of the color case hardening and bore slight nicks and signs of wear. In all, these Colts represented an unusually fine brace of Civil War six-guns, ultimately fetching a hammer price of $130,000 at Greg Martin Auctions in Irvine, California, on September 27, 2009. Sharlene Perez had definitely discovered gold in her closet.