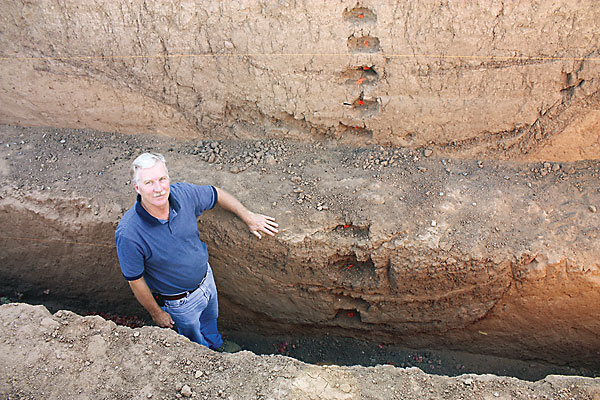 In Phoenix, which means rebirth, the realization that history could be found deep beneath the Arizona dirt came when what is now America’s fifth largest city was nothing but a wide spot along a bad road.

Back in 1924, the much smaller town received a remarkable gift: a slightly excavated ruin that promised answers about the civilization that had inhabited this very ground centuries before the white man ever arrived—the Hohokam tribe that just seemed to disappear from Phoenix around 1450.

“The city realized it needed someone to take care of the gift, and that’s how in 1929 it became the first city in the nation with a city archaeologist,” says Todd Bostwick, the fourth man to hold the title, who has been in the job for the last 20 years.

Remember, this is 1929—the year the Stock Market crashed and sent America’s economy into a tailspin, and this town of 48,118 people (according to 1930 census data) dedicates its time, attention and money to ancient ruins?

“You’ve got to remember what was happening in Phoenix at that time—there was quite a moment of cultural awareness,” Bostwick says. Phoenix established South Mountain Park, which still is the largest urban mountain park in the nation; the Heard Museum was founded and remains to this day one of the nation’s best anthropological museums; and the Arizona Museum of History was created.

Since then, the city has only looked forward in protecting the original culture which made the arid Sonoran Desert an agricultural mecca.

Today that gift is the Pueblo Grande Museum, recognized as a “world class archaeological museum” and Phoenix’s only National Historic Landmark. Here people can walk through an urban village where the Hohokam once lived.

“The Hohokam cultivated hundreds of thousands of acres in this desert with a series of canals, making it the largest agricultural production in the Southwest and something that rivaled agriculture anywhere in the United States,” Bostwick notes. “And the important thing is the Hohokam sustained that for 1,000 years.”

But then, they disappeared. Historians are still trying to find out why—what caused the Hohokam to leave a community that in its time was the equivalent of Phoenix today?

“I think they voted with their feet,” Bostwick says. “We don’t find evidence of warfare or a massive epidemic, but there was a triple whammy: we know they suffered drought and there were major floods in the 1350s and 1380s, while native stories tell us there was social unrest in the community.” The canals they left behind are still a major water distribution center for what is now a massive Phoenix area.

It’s so important to study the Hohokam to avoid their mistakes in the future, he notes. “The Sonoran Desert of the Southwest is a magical environment, it always has been—that’s what makes the Hohokam so remarkable; they found a balance for 1,000 years, and then they fell out of balance. Our research into the Hohokam is as valuable as any research in the world.”

He’s particularly proud Phoenix has passed strong and solid laws to protect ancient sites. Since the early 1980s, Phoenix has required anyone submitting an application for a construction project—be it the city or a private developer—to have an archaeological evaluation. Bostwick says, “If there’s something there, we get in and remove it before the bulldozers arrive.”

He says Phoenix is spending more on archaeological studies and excavations than any city in the nation—a reflection of the massive ancient cities that were here. “Before the recent economic downturn,” Bostwick tells us, “it was not unusual for more than $1 million to be spent annually on archaeology projects … within the boundaries of Phoenix.”

Besides overseeing all 700 archaeological sites within the city limits—yes, 700 so far and still counting—and making sure every construction project respects ancient ruins, Bostwick also has become an expert on American Indian rock art. He wrote 2002’s Landscape of the Spirits: Hohokam Rock Art at South Mountain Park, which features photographs by Peter Krocek.

Back at Pueblo Grande, Bostwick remains energized by his crew’s finds. “We just discovered an intact field where the city wants to build the new sky train at Washington and 44th Street,” he tells us. “We can see the entire grid of planting and the entire network of canals—we had ideas about this before but to get the whole system is something!”

And all of the Old West Saviors who helped to make Pueblo Grande the majestic site it is today—from former Arizona Archaeological & Historical Society president Thomas Armstrong for his 1924 gift to Phoenix, to the first city archaeologist Odd S. Halseth, to Todd Bostwick—they’re all something special too.