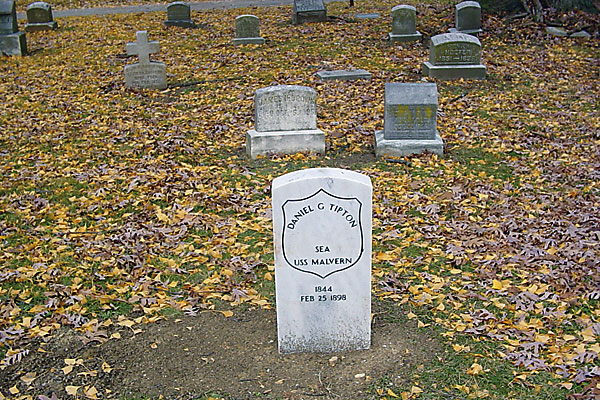 Most folks know that the violence in Tombstone, Arizona, didn’t end with the Gunfight behind the O.K. Corral in 1881.

A number of shootings—several of them fatal—took place as the Cowboys and the Earps tried to gain an upper hand in the area. Perhaps most famous is the so-called Vendetta Ride, during which Wyatt Earp led several men in seeking revenge for the shootings of his brothers.

Then there’s Dan Tipton. Until a few years ago, little was known about this member of the Earp posse. But thanks to Australian researcher Peter Brand, the expert on the Vendetta Ride and its participants, we now know a fair amount—including what happened to this forgotten avenger.

Tipton was born in New York State in 1844. He served aboard the Navy’s USS Malvern in the last few months of the Civil War. Then he drifted West.

Records show he came to Tombstone in March 1881. He called himself a miner, but he also practiced the gambling arts. Tipton became friends with the local “law and order” faction, including the Earps. Brand believes Tipton served as bodyguard to the Earp family after the attempt on the life of Wyatt’s brother Virgil on December 28, 1881.

Late in the evening of March 18, 1882, somebody fatally shot Morgan Earp in the back as he played pool at Hatch’s Billiard Room. Tipton had been there, watching the game.

He didn’t accompany the Earp group to the Tucson railroad station, a couple of days later, where Wyatt and Co. gunned down Frank Stilwell. Wyatt had gotten a tip that Stilwell planned to kill Wyatt’s brother Virgil, who was heading by train to Colton, California, for Morgan’s funeral.

Tipton did ride with the Vendetta posse on March 22 when they went to a remote wood camp and killed Florentino Cruz, a.k.a. Indian Charlie.

He missed the shoot-out at Iron Springs on March 24 in which Curly Bill Brocius was killed, because Cochise County Sheriff John Behan had tossed him in jail on trumped-up charges. Tipton was released on March 25.

On March 27, Wyatt Earp sent a message to Tipton, who grabbed $1,000 donated by a mining magnate and met the posse at Henry Hooker’s Sierra Bonita Ranch north of Willcox.

The riders continued to look for members of the Cowboy faction for a few days and then left Arizona on April 15. Tipton accompanied them through New Mexico and into Colorado, where most of the posse stayed to avoid arrest warrants from Cochise County.

After that, Tipton may have been a member of the so-called Dodge City Peace Commission in July 1883, but Brand hasn’t confirmed that. By 1885, Tipton was working for U.S. Customs in El Paso, Texas.

In 1897, Tipton ran afoul of the law. Customs agents arrested him for smuggling forged Chinese immigrant labor certificates. He was convicted in October and sentenced to 20 months in the Ohio Federal Penitentiary.

The 53-year-old inmate lasted just four months behind bars before dying of Bright’s Disease on February 25, 1898. He left no known kin. His body was buried in an unmarked grave at the Green Lawn Cemetery in Columbus.

That might have been the end of the story, if not for a collaborative international effort led by Brand. In 2003, Brand worked with researchers Mark Dworkin (Canada), Jean Smith (Arizona) and Roy Young (Oklahoma) to locate the exact spot of the grave, find Tipton’s military service records and work with the U.S. Veterans Administration to place a marker at the final resting place in 2005.

A formal dedication was held on July 1, 2006. The headstone is plain, with just Tipton’s name, his birth and death dates, and his military service. Nothing on it even suggests that the man buried there participated in one of the most controversial acts in Old West history.