Western Flair the Duke Would Appreciate 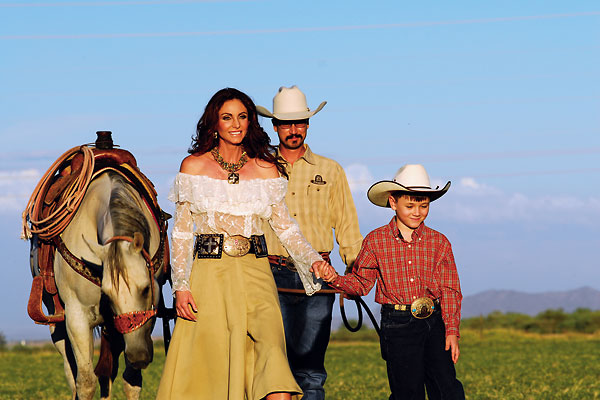 John Wayne had solid ranch connections in Arizona. He and partner Louie Johnson once owned the Red River Ranch, which included more than 14,000 acres of farmland and desert near Stanfield, roughly 15 miles west of Casa Grande.

He also owned the 50,000-acre 26 Bar Ranch near Springerville, and he had an 80,000-head cattle feeding operation. The Duke would often arrive at the Stanfield ranch in an airplane. That dirt air strip he used is now the tree-lined driveway leading to Bobbi Jeen and Jim Olson’s home.

The Olsons own about 100 acres of the Red River Ranch where they live and raise horses and cattle, and grow some oats and Bermuda grass hay. They use the place where the Duke tied down his airplane as a parking lot for the bunkhouse.

Besides the land, the Olsons have other connections to John Wayne. They assist in putting on the “Louie and the Duke Classics” fundraiser in Casa Grande. The golf tournament, dinner/auction and team roping event not only brings the community together, but also supports the John Wayne Cancer Foundation.

Their mission-style stucco home blends well into the desert landscape. Bobbi Jeen, a model, stuntwoman and actress, keeps busy with photo shoots at the home and working on the Arizona Country series for AZ-TV, where she will be the host of 26 episodes taking viewers on adventures throughout Arizona. “I’ll be introducing amazing people and listening to wonderful Country music,” she says. “I am very excited about this new adventure. And I love the fact that I get to promote what I love, the Western lifestyle.”

Bobbi Jeen and Jim, who have an eight-year-old son Rowdy James, designed and built their home. The entry leads into the living room with its large log beams and neutral walls—neutral, that is, except for the wall that was once part of a cattle corral. The first thing you see when stepping into the home is that old wood wall. Finding the right boards to build it was a bit of a challenge, until Jim realized that the worn wood on a shipping alley in a set of corrals on a ranch he had leased would be perfect. To get the wood for his house, he offered to “upgrade” the corrals; the ranch owner readily agreed.

“What he didn’t know,” Jim says of the rancher, “was that we would have built a whole new set of pipe corrals just to get those old planks for the house! They are hard to come by, and they fit that wall perfectly with not one splice in any of the runs.”

Hanging on the wall are a collection of belt buckles, a mirror made from a horse collar, lanterns, stirrups and other cowboy gear. Like that wall of memorabilia, the Olsons have imprinted their house with family heirlooms and collectibles. One bedroom includes furnishings that once belonged to Bobbi Jeen’s great-grandparents, including the bed, dresser, sitting table and an antique radio used as a nightstand.

They also showcase several antique and collectible rifles in their home. Some are family heirlooms, and some they have purchased or bartered over the years, Jim says. One is a John Wayne Commemorative .32-40 caliber Winchester lever action rifle that Bobbi Jeen purchased for Jim as a Christmas present. It has the original box, rifle scabbard, two boxes of shells that came with it and the certificate of authenticity. The rifle has never been fired or even had a shell in the chamber.

Since they raise cattle and horses (both Jim and Bobbi are team ropers), the Olsons built a bunkhouse with separate living quarters patterned after their own home, including the same tile, slate, travertine, wood and color palette. “We have people stay there all of the time,” Jim says. “Photographers doing shoots or friends coming by to rope and stay a few days.”