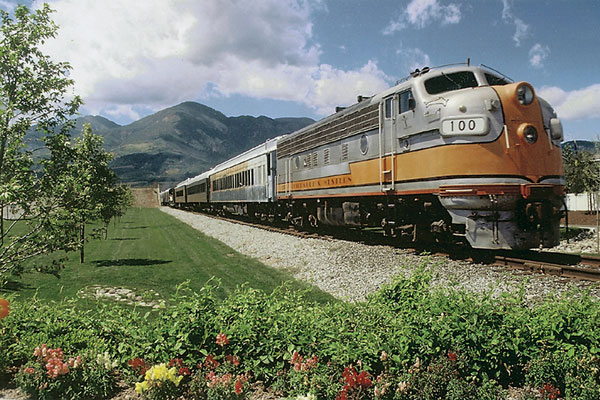 Seabiscuit is one recent movie that was filmed at the railway in Fillmore, California.

But Dave Wilkinson wasn’t manning the projection at the Mann Theaters in Southern California when that film was released. He was on set, at his new job, running the railway that he and his wife Tresa acquired in 1996.

Tresa still manages and consults for mobile home parks, but she’s devoted to her work at the railroad. “The railroad job has one really attractive advantage that management consulting doesn’t,” she tells us. “I get to ride the trains.” Besides his work as a movie projectionist, Dave also helped fight fires and repair back country campground sites in the Ojai District of the U.S. Forest Service. And he served 15 years volunteering with the Ventura County Station in his hometown of Ojai.

It may sound like the Wilkinsons switched gears dramatically, but “we both have loved trains all our lives,” they admit. Dave can even remember his first train ride: the Ojai local. The Coast Daylight and the Chief were also favorites when he was a child. But the couple had their ultimate train experience right at their railway: a 25th anniversary party aboard the Fillmore & Western, which their employees had thrown for them.

The Fillmore & Western Railway, celebrating its 10th anniversary this year, travels through citrus groves that are over 100 years old and offers many theme rides, with the most popular being the Murder Mystery Dinner Train. This trip is offered the second and third Saturdays of every month, and is $89 per person (tax and gratuity included).

A true steam train enthusiast, Tresa tells us “there’s nothing like a cowboy riding his stallion to chase down an old steam train.” Chances are, someone will be filming just such a scene during your trip to the Fillmore & Western.