A Shoot-’em-up for Gamers 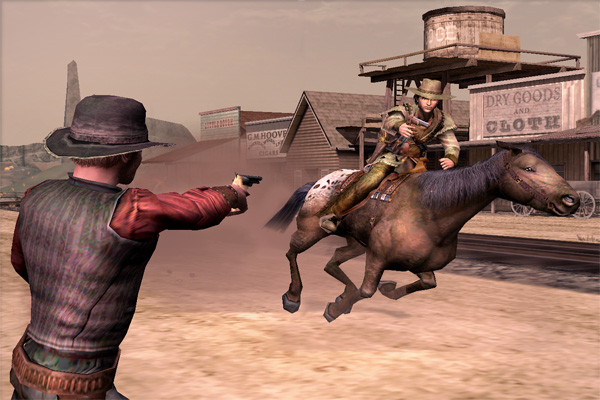 In November 2002, Sue Lambert (then our Circulation Manager and now our Director of Advertising) was fulfilling website orders when she came across an order for over $500 in back issues from a company called Neversoft.

Fast forward three years and that game finally has been released. Neversoft and Activision’s Gun has a Mature rating and is available on these platforms: Playstation 2, Xbox360, Xbox, GameCube and PC. Neversoft is more popularly known for its Tony Hawk titles, based on the real-life skateboarder, so this is its first foray into the West. Since Gun’s release last November, critic response has largely been enthusiastic.

Kristan Reed (Eurogamer) is well versed in shooter games. Reed says LucasArts’ Outlaws “toyed with our affections back in 1996” and since then, video gamers have gotten the “underwhelming first-person shooter Dead Man’s Hand, and the promising but ultimately disappointingly basic third-person effort Red Dead Revolver.” But, Reed notes, Gun is “one game that’s confidently saddling up to the challenge of being both a commercially viable and critically acclaimed take on the Wild West.”

Many critics, ranging from Thierry Nguyen at Playstation magazine to John Breeden II at Game Industry News, feel the voice acting in the game is top-notch. Thomas Jane (The Punisher) is the vengeful gunslinger Colton White, while Kris Kristofferson (Pat Garrett & Billy the Kid) is his mountain man father Ned. Brad Dourif (who plays Doc Cochran in HBO’s Deadwood) also joins the cast as the evil preacher Josiah Reed. Their presence makes “you want to finish the mission just to hear those aged cool guys yammer at each other,” Nguyen notes.

The storyline is also a big draw. “The fact that there actually is a tangible, immersive storyline in a shooter is enough to make ya order up a sarsaparilla and celebrate with all your friends down at the local saloon,” says Eli “The Mad Man” Shaytovich from GameDaily. The kudos for the storyline goes to Randall Jahnson, whose past screenwriting credits include Mask of Zorro. Writing for a video game is challenging when you’re familiar with the movie business, as Jahnson’s plot lines had to unfold in scenes that run around two minutes, which is about half the length of the average movie scene. But Jahnson particularly liked the side missions, which allowed him to write in buffalo hunts, bounty hunters, the pony express and train heists. He told Hollywood Reporter that these missions “allowed me to go deeper into detail and create a richness of history that I wouldn’t have been able to do in a film.”

Another critic, Jason Zingale (Bullz-Eye.com), thinks the best part of the game is the gunplay. “The push of a button will quickly take you into Quick Draw mode (a Matrix-like slo-mo), allow you to change your weapons or zoom in on your target without losing much time.”

But not everyone is as enthused about the game. There was at least one critic for an alternative press who found something he didn’t like.

The New Times went on its P.C. wagon and criticized the game for one storyline, in which you must exterminate the Apaches who have been interfering with the Chinamen’s repair of a railway. To quote: “To modern eyes, it looks a little too much like genocide. The game fails on its own terms by including it. The notion of Native Americans as savages is a throwback to the old Old West.”

The video game makers feel the criticism hones in on one type of Indian portrayed in the game. “Native Americans play a host of roles in Gun. You will run into different nations that act as both allies and enemies (some might even be both),” says Irwin Chen, associate producer of Gun at Activision.

No matter where you stand on this issue, the game is hard to ignore with almost everyone and their mother declaring it as one of, if not the, best Western video games around. Even Paul Andy, the 12-year-old son of Contributing Editor Paul Hutton, gave the game two thumbs up. “Great graphics, lots of action, clever story, It’s a brave new world,” his father tells us.

What’s best about the game is finding traces of Western material you love. From Rube Burrow in his coffin (on ad; taken from the pages of True West magazine) to the film Little Big Man.

Script writer Randall admits the film that he saw as a little kid helped inspire him. He especially loved the different phases of Jack Crabb’s journey, and how the crusty centenarian was always stumbling into real-life characters, such as Wild Bill Hickok and George Custer. This weaving of true personas into the narrative can be found in  Gun, in which Randall inserted his own real-life characters: Clay Allison, Hoodoo Brown, Arkansas Dave Rudabaugh, J.J. Webb and Luke Short.

Clay Allison was once asked what he did for a living. His simple reply was: “I am a shootist.” With this game, you can be, too.