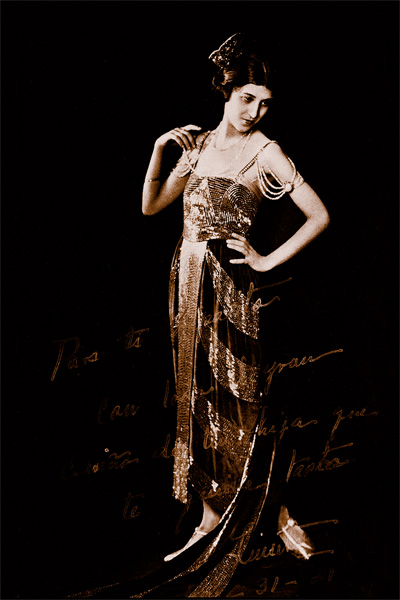 She grew up in Tucson, Arizona, was the first Ronstadt superstar and is remembered for her album, My Father’s Songs.

But this isn’t a story about popular singer Linda Ronstadt, who is performing to this day.  This is a story about her aunt, who was a star before Linda was ever born, but undoubtedly was an inspiration to her.

Luisa Ronstadt Espinel, born in 1892, would become an ambassador of culture as she performed throughout the United States and Europe—bringing Spanish and Mexican music to the general population.

Both she and her niece can trace their musical roots back even further, to Luisa’s father Federico Jose Maria Ronstadt, and to the traditions his family brought to the Arizona Territory from Mexico.

A Star is Born

Luisa was born the first of four children to Fred Ronstadt and Sara Levin. The family lived in “The Old Pueblo,” then the major town in Arizona. Tucson had originally been settled as a presidio for Spanish troops and explorers, and then went under Mexican possession. But even as it was sold to the United States, its Mexican roots ran deep.  At the time of Luisa’s birth, and into the early 1900s, the majority of Tucson residents were of Mexican descent.

Like many families, Luisa spoke Spanish at home—she learned English only after going to public school—but the language most relevant in her life was the language of music. Her mother played piano, her father played guitar and her siblings all sang along with her. “The most vivid memories of my childhood are interwoven with music and mostly the music of my father, who loved it. It was his whole life in those days; his business was a secondary consideration,” she told The Arizona Daily Star.

Her father had been born in Mexico in 1868 to a German father and a Spanish mother, but he was sent to Tucson when he was a teenager to apprentice at a freight company. By 19, he bought the wagon company and became so successful, he ran wagons from Colorado to Mexico. But it was in music where he made his real mark. Fred Ronstadt helped found one of Tucson’s first orchestras, Club Filarmonico Tucsonense, in 1888. He arranged the danzas, mazurkas, polkas and serenades performed in a new bandstand on Wednesday evenings and Saturday afternoons. The band also played for special occasions—Christmas, New Year’s Eve, national holidays, church socials, parades. In 1890, it toured Southern California. Newspapers reported that the band was popular with both Mexican and Anglo populations.

In 1902, Luisa’s mother died of scarlet fever. Her father later married Lupe Dalton, who gave him four sons—all musicians, too.  The third son from that union, Gilbert, is Linda Ronstadt’s father.

Around 1911, Luisa went to boarding school in San Francisco, where she took voice lessons and worked as an organist.  She also began research that would focus her life, reports Wynne Brown in More than Petticoats: Remarkable Arizona Women.  One day, she found a collection of songs and legends that she had heard as a child. “The discovery of these familiar things in a new and glamorous setting was a definite experience to her. It gave them a sudden new life in her imagination and stimulated her desire to explore further into their background. Eventually it turned the course of her music career away from conventional channels,” reported The Los Angeles Times.

Luisa moved to Georgia, where she taught music at two colleges, until she returned to Tucson in 1917 to perform in an opera staged to raise funds to build the Temple of Music and Art. She sang under her stage name, Luisa Espinel. Reviewers said she had a “magnetic, husky” voice.

She traveled to Europe in 1924 in search of more folk songs, spending weeks in museums and libraries in Spain and France, where she found songs and dances that dated back to the 1200s. While there, she polished her act into what Brown calls “a scholarly combination of music, acting and dance.”

To go with her unusual and exciting music, she sought out unusual and exciting costumes and instruments. The Tucson Citizen reported that her tambourine had “hung for one hundred years in an Asturian kitchen in northern Spain and was the property of a peasant girl, Gloria, with a reputation for magic.” Luisa wore a century-old brocade wedding dress that she had found in her travels. “The costumes and properties she uses would make in themselves a little museum,” noted The Tucson Citizen.

In 1927, to great acclaim, she performed authentic folk music from the 12 regions of Spain at the Edith Totten Theatre in New York City. The New York Times noted that she had four encores and a standing ovation. The reviewer gushed, “Senorita Espinel can congratulate herself on a genuine success. Her entertainment was interesting, unusual and artistic. She made a colorful figure in Spanish costumes and acted her songs naturally and wittily.” The review went on to call her a “graceful dancer, as well as a talented singer.”

But Brown notes Luisa was most pleased with these words from The Los Angeles Times: “Cognizant Spaniards declared it was the first time the folk music of Spain had been presented in its pure form, without the pernicious influence of Broadway or the boulevards of Paris.”

Luisa returned to Tucson a recognized superstar. When she performed at the Temple of Music and Art, she added Arizona and Mexican songs to her Spanish repertoire.

In 1928, she returned to Georgia to perform, surprised to find so many of her former pupils on hand to laud her. That same year, she became the first singer of folk songs asked to perform at the Berkshire Festival of Chamber Music in Pittsfield, Massachusetts. To top off her illustrious year, she performed at the Congressional Library in Washington, D.C.

Luisa toured for years, altering and refining her programs.  In 1932, her tour was called Cuadro Castizos, or “little framed canvases of real life.”

She eventually settled in Los Angeles and went into the movies, costarring several times with her friend Marlene Dietrich, Brown notes. In 1934, she married a painter named Charles Kassler, Jr., but the marriage didn’t last.

In 1946, she published a book of Mexican folk songs, Canciones de Mi Padre, or “My Father’s Songs.” Forty years later, her famous niece would use the same title for her successful album of mariachi music.

In her later years, Luisa gave private voice lessons and was the resident hostess, teaching the public about Spanish traditions at the Casa de Adobe historic mansion, which is part of the Southwest Museum.  She died on February 2, 1963, in Los Angeles.

Luisa Ronstadt Espinel’s contribution to celebrating Spanish and Mexican music will never be forgotten, especially at home. In 1994, the city of Tucson awarded her family a “Copper Letter Award,” thanking the Ronstadt family for “keeping the air of our town beautiful with song for well over a hundred years.”