Finding Daniel Boone in a Cornfield 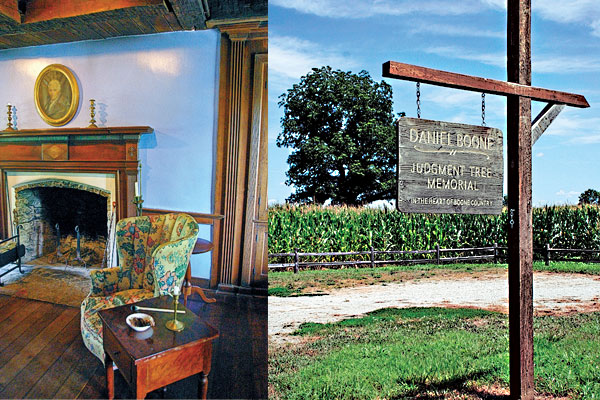 It’s not even here anymore, but standing near a cornfield on a clear summer morning, I cannot help myself. I sing:

Daniel Boone was a man
Yes, a big man
With an eye like an eagle
And as tall as a mountain
was he.

No, I’m not in Kentucky. I’m in Missouri. And I’m not lost, although I have been, well, as Dan’l reportedly told artist Chester Harding: “No, I can’t say as ever I was lost, but I was bewildered once for three days.”

Having finally escaped suburban St. Louis congestion, I discovered this park in Matson—which is near, er, nothing—and I stand by a “courthouse” that should be revered by jurists everywhere. Here, from 1800 to 1804, Dan’l held court as syndic of the Femme Osage District when the Spanish controlled Missouri. Under the shade of an elm, the “judgment tree,” Dan’l the judge passed sentences and settled arguments.

Alas, the tree no longer stands at the Daniel Boone Judgment Tree Memorial. Lightning struck it in the late 1920s or early ’30s, and a storm blew it over in 1951, after which it was cut up and removed from the field.

The stories, however, remain of Boone, sitting underneath that tree, likely holding a copy of Gulliver’s Travels rather than Sir William Blackstone’s Commentaries on the Laws of England, and meting his own sense of justice. Nathan Boone said that his dad “governed more by equity than law.”

Maybe those “Judgment Tree” tales are more apocryphal than historical, but they ring true. Of course, I also believed everything I saw on that 1960s NBC series starring Fess Parker as the frontiersman.

Dan’l made a mark in Missouri, and Missouri remembers him well. Boone’s Lick is where Nathan ventured in salt making (Dan’l didn’t like the idea). The Boone burial site is near Marthasville (he probably didn’t care much for that idea either). The University of Missouri’s main campus is in Boone County, and Daniel Boone Elementary School is in Wentzville (Dan’l learned from the school of hard knocks). But I’m off to the Daniel Boone Home & Heritage Center in Defiance.

The massive home built by Nathan is the centerpiece of a village featuring about a dozen 19th-century buildings moved from within 50 miles of the area. Dan’l arrived in Missouri in 1799 when he was nearly 65 and died in this house on September 26, 1820.

Another story I like about Dan’l in Missouri: He kept his coffin underneath his bed, but pulled it out from time to time to make sure he still fit in it. He probably loved scaring his grandkids that way too.

Of course, everybody identifies Dan’l with Kentucky. I have seen his grave in Frankfort and traipsed across Fort Boonesborough State Park, so I will give Kentucky its due. After all, the state is also home to the Louisville Slugger factory and good bourbon. But I’m a Missouri Boone-head. Give me Missouri’s older, wiser, wittier Dan’l than young Dan’l chasing Shawnee and Cherokee Indians.

Besides, Missouri also has better baseball and barbecue.

Fess Parker might be Davy Crockett to many, and Daniel Boone to others, but to Johnny D. Boggs, he’ll always be the airplane pilot from Them!—and a vintner whose winery makes a dynamite viognier.