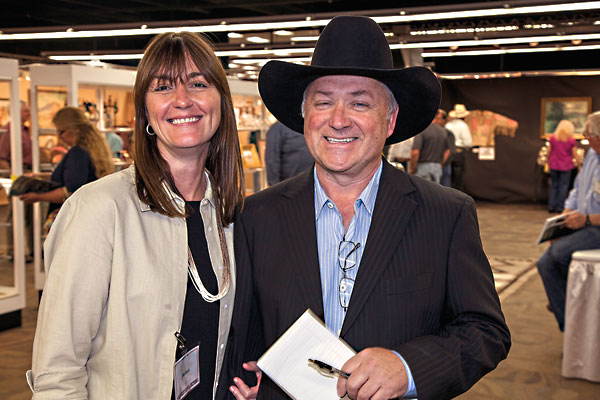 I collect art because it surprises me. The same painting can look different every day. It’s always changing.

I’ve lived a lot of places, but, by far, my favorite is where I go next. The best part of being on the road is finding a great place to eat. It used to be finding a great antique store, but the Internet changed all that.

In the history of the Old West, I wish I could have gone on Teddy Roosevelt’s trip to Gates Camp Lucky.

The problem with consignment is taking the bad with the good.

The one that got away...after 35 years, quite a few have gotten away. Maybe the real Annie Oakley trunk at the Brimfield collectible’s show when I was flat broke.

When the Billy the Kid tintype sold for $2.3 mil, in 2011, I was not surprised, but I was thrilled. They don’t call it the “Holy Grail” of Western collecting for nothing.

It was a lucky day when I met Melissa (and when the Uphams, who owned the Kid tintype, called).

When I first started, I didn’t know much about anything. You learn as you go in this business.

When we left Cody, Wyoming, for Denver, Colorado, I was a little nervous at first, but I never doubted the necessity of the move. The event outgrew Cody. Everybody used to say that if you wanted to be a new dealer at Cody, somebody had to die first.

What I love about this business is the people. The material is great, of course, but without the people, it’s pointless.

The hardest part about getting people to put their stuff up for auction is helping them to get realistic about values, and explaining that their pieces are maybe not quite as important as grandpa told them they were.

Don’t get me started on people who call with questions like, “What color are the black boots?” or “How big is the five-foot-tall sign?”

The best Western ever is Lonesome Dove.

Most people get tripped up on provenance. Real provenance proves something, but most of what people want to call provenance are just stories and tales.

Tequila is equal to a broken nose.

My daddy always told me to get out of the way of the TV.

History has taught me that there are no absolutes.

The first collector’s show I ever did was the gun show in Portsmouth, New Hampshire, in 1969.

I fell in love with the West when I was eight years old. Somewhere I have a copy of that black-and-white photo that all of us men of a certain age have of ourselves all dressed up in our cowboy outfits with our plastic six-shooters.

Johnny Crawford made a guest appearance at this year’s show. “I thought ‘Donna’ was the most romantic song when I was young. I only liked girls named Donna,” Lebel says. While he recorded his Billboard top hits, Crawford also played the son in ABC’s The Rifleman.

Believing that Western Americana collectibles would appeal to a broader public if they knew about them, Brian Lebel launched his Old West Show & Auction 25 years ago. A sought-after appraiser himself, Lebel has dedicated his career to bringing authenticated, fascinating artifacts of Old West history to collectors. Melissa McCracken, whom he married in 2012, helps him spread the news of the collectibles you may someday own…and the ones you wish you did!