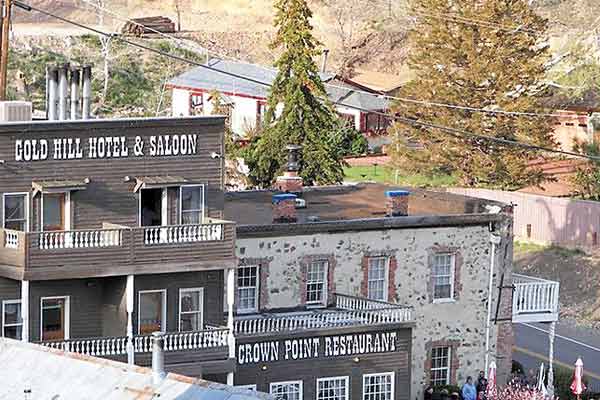 A grand hotel doesn’t necessarily mean palatial buildings, Italian marble and glittering chandeliers. Some hotels, like people, are modest in appearance, but grand in character.

Consider the Gold Hill Hotel, a mile south of Virginia City. Ornate, it is not. Fancy? Nope. But the oldest operating hotel in the state, set against the sweeping backdrop of the Sierra Nevada Mountains, is a grand hotel nonetheless.

The hotel was built sometime before 1862. Horace Vesey acquired the building and changed the name to the Vesey Hotel, which appears in several historic photos. It became the Gold Hill Hotel in the 1950s. For more information about the hotel and general Nevada history, check out the hotel’s bookstore.

It’s easy to imagine the past while staying at the Gold Hill. Four of the hotel’s 16 rooms date from its construction. Two of those original rooms have brass beds, while the third’s bed is sleigh-shaped. The remaining original room has a canopy bed and a large, claw-foot antique bathtub.

The Crown Point Restaurant offers a fine selection of game dishes, such as buffalo, antelope and wild boar. Pianist Squeek Steele, noted for her remarkable repertoire of ragtime music and Old West tunes, plays in the dining room on Fridays and Saturdays.

The Gold Hill Saloon offers an extensive selection of spirits, including more than 50 kinds of beer. It’s a fine place to sit and ponder the twists and turns of history.