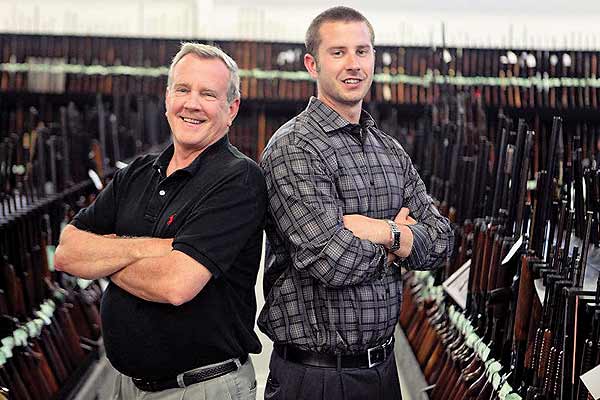 “If guns could talk” is a popular adage in our business. One that gets pretty close is the Colt Single Action “Couch” gun up for bid at our April 19-21 auction. We have at least 500 pages of correspondence, journal entries and family photos of Texas immigration officer Bertrand M. Couch, a.k.a. Frisco Bert. This gun rivals the Bob Dalton Single Action we sold last year, which was documented to Bob’s body at the failed Coffeyville raid. The guns actually have a connection because Emmett Dalton befriended Couch; their correspondence is with the gun.

I fell in love with the West when I visited the battlefield at Little Big Horn, as a child.

For my money the best Western movie ever is 1948’s The Treasure of the Sierra Madre.

When people ask me what to collect, I tell them collect what you like and collect the best condition you can afford. When you want to talk about the real “blue chips” of firearms collecting, those are the Colts and Winchesters. But don’t ask my son; he and I are avid Smith & Wesson collectors.

Nobody told me that it is just as important to know who you buy a gun from, as what the gun is.

Don’t get me started on people selling fakes to buyers.

History has taught me that ordinary people are capable of extraordinary achievements.

I learned everything I know from fellow collectors.

The most fascinating part of collecting for an auction is the diversity of firearms.

I knew I’d be good once I got over my apprehension of actually calling an auction.

My daddy always told me never call your mother “she.”

The biggest change in the collector’s world happened when the Internet became mainstream.

Most people get tripped up on original or refinished.

What the heck is up with calling an AR-15 a military weapon?

Wish I had a dollar for every time a seller told me he had someone else interested in a gun I was trying to buy.

I can’t imagine living in Chicago, with its gun laws.

My only regret is I did not buy guns sooner.

PATRICK HOGAN, ROCK ISLAND AUCTION CO. PRESIDENT
Born and raised on Chicago’s south side in a family of eight children, Patrick Hogan joined the Navy in 1974 as a machinist mate in charge of a submarine’s nuclear reactor. He followed up his Navy career by owning a series of gas stations and then a video store and film processing firm. While helping two auction firms produce their catalogues, he saw the opportunity to go into the business himself and opened Rock Island Auction Company in 1993. Last year, his auction house broke an industry record by posting $47 million in sales (the Bob Dalton Colt, realized at $322,000, was part of that record). In 2011, his son, Kevin, joined the business to help auctioneer.