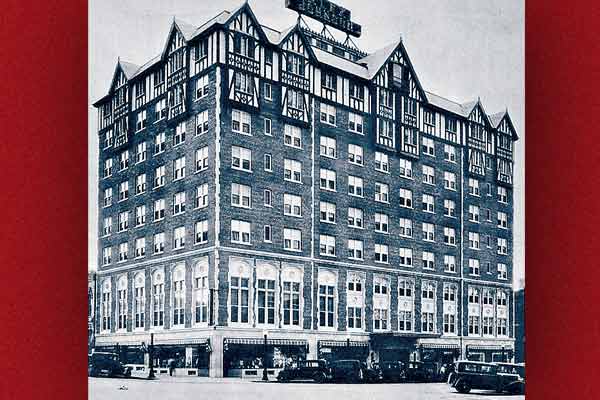 Sure, most grand hotels have fancy chandeliers, but we’ll wager none have one quite like the Alex Johnson’s—nearly eight feet across and made of Sioux war spears.

Alex Carlton Johnson, the vice president of the Chicago and Northwestern Railroad, was a great admirer of Sioux culture. So when he decided to build his hotel, which opened in 1928, he insisted his designers incorporate native symbols throughout the lobby, guest rooms and hallways.

The lobby’s travertine floor with its inlaid brass tipi, its unique chandelier and the hand-carved Indian visages in the beams of the great room all contribute to the hotel’s Old West charm.

Six sitting presidents, from Calvin Coolidge to Ronald Reagan, have stayed at the 140-room hotel over the years, along with a slew of filmmakers and movies stars, including Cary Grant and Kevin Costner. Director Alfred Hitchcock was so taken with the Alex Johnson while shooting North By Northwest, that he incorporated a few shots of the hotel into the film.

Be sure to check out the art deco style of the Vertex Sky Bar on the hotel’s top two floors, a great place to enjoy seasonal patio seating, warming your outsides by the fire pit and your insides with a signature cocktail.