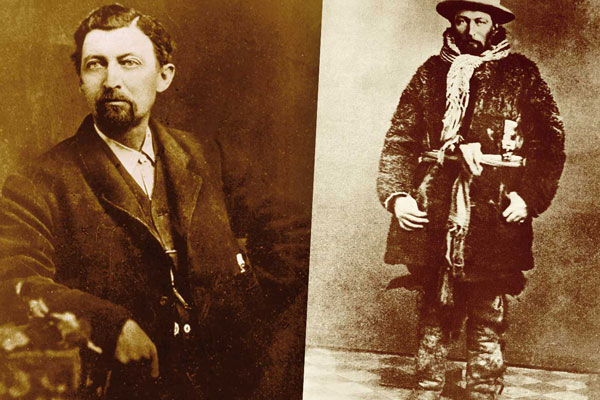 “NEARLY everyone on the coast and directly east of the mountains came to know my brother, either personally or by repute, as early as the sixties, and gradually his reputation crossed the divide, and came through the East,” Henry James “Hank” Monk’s brother, George, recalled to the Washington Times in 1903. “He was an adventurous fellow, but he took no chances when his coach was loaded.”

The passenger of Hank’s most famous ride may have disagreed with the assertion that the driver took no chances.

When Horace Greeley, the former New York Tribune editor and presidential candidate, was running behind schedule during an 1859 lecture tour and needed quick transport from the vicinity of Carson City, Nevada, to Placerville, California, he found himself in Hank’s coach for what would be the ride of his life.

Hank took off at great speed through the Sierra Nevada, leading Greeley to bounce about the coach, “…his bare head bobbing, sometimes on the back and then on the front of the seat…holding on to whatever he could grab,” Hank told a writer for San Francisco’s Golden Era the following year.

When Greeley expressed his concerns about the breakneck pace, Hank replied, “Horace, keep your seat! I told you I would get there by five o’clock, and by God I’ll do it, if the axles hold!”

Though shaken from the tumultuous journey, Greeley did indeed arrive on time. As a token of gratitude, he awarded Hank with the finest suit Placerville had to offer.

The ride took on a legendary status after Mark Twain caught wind of the tale and included his embellished retelling of it in his 1872 book Roughing It.

Born and raised in New York, Hank had begun his career as a stage driver at the age of 12. Some people were born to perform a particular job, and that seemed to be the case for Hank. In 1852, spurred on by the California Gold Rush, the 26-year-old reached Sacramento, where he initially drove for the California Stage Company. Hank would go on to spend more than two decades in the region, growing his legend as one of the most colorful and adventurous stage drivers ever.

Beyond Hank’s stage driving talents, his colorful retellings of his adventures endured him to those who crossed his path. In 1878, J.P. Meder composed a song, “Hank Monk Schottische,” about the stagecoach driver. Idah Meacham Strobridge wrote in her 1909 book, The Land of Purple Shadows, that riding with the “incomparable” Hank was a dream come true; if given the choice, she would rather see, hear and speak to Hank rather than then-President Abraham Lincoln.

When Hank succumbed to pneumonia in 1883, Nevada’s Virginia City Territorial Enterprise paid tribute to the folk hero with a fitting obituary: “Hank Monk, the famous stage coach driver is dead. He has been on the downgrade for some time. On Wednesday his foot lost its final hold on the brake and his coach could not be stopped until, battered and broken on a sharp turn, it went over into the canyon, black and deep, which we call death….”

Chad Hays is the assistant editor of True West Magazine. Do you know about an unsung character of the Old West whose story we should share here? Send the details to editor@twmag.com, and be sure to include high-resolution historical photos.