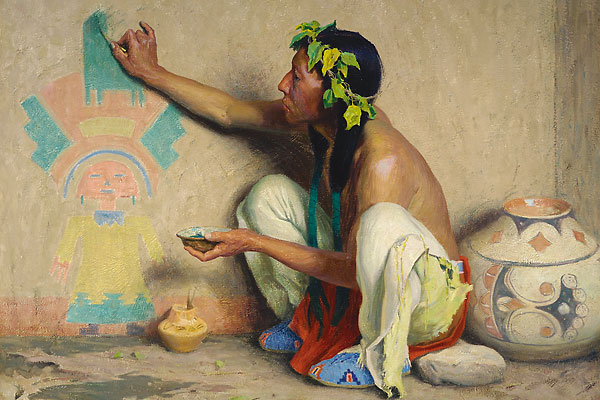 “In his Kachina Painter, Mr. Couse represents a modern Indian painting on a wall one of the sacred symbols of his ancestors.

“There is a hint of racial scorn in the mask-like face of the ‘Pottery Vendor,’ a straight line against a wall in the midst of his wares, a hint of the sphinx-like reserve which the white man’s commercial cunning can not penetrate.”

When Rose Henderson wrote the above, this 1917 painting is the only one she took care to name. She recorded her visit with E.Irving Couse in his studio at Taos, New Mexico, which El Palacio published on April 15, 1921. On July 24, 2010, Kachina Painter hammered in as the top-selling lot, for $650,000, at the 25th anniversary Coeur d’Alene Art Auction in Reno, Nevada.

Couse’s granddaughter Virginia Couse Leavitt is the current custodian of the Kit Carson Road studios where her grandfather and Joseph Henry Sharp, his fellow charter member of the Taos Society of Artists, both painted. Virginia remembers bringing “Uncle Henry” bouquets of pansies from her grandfather’s garden.

She graciously shares the story of the Kachina Painter, stating it was one of three paintings that her grandfather had chosen to include in the first national exhibition of the Taos Society of Artists, which opened in New York City at the Hotel Majestic in December 1917.  New York collector Horatio S. Ruben had already purchased it the month before.

“A recurring theme in many of [Couse’s] paintings is the native artist at work painting on a wall or a skin; forming or decorating a piece of pottery; or weaving a blanket or a basket,” she states. “In the Kachina Painter, Couse captures the act of creation itself as the native artist completes his drawing. Of equal importance, however, is the beautiful painted jar behind the figure, another fine example of Indian artistry.”

That fine jar is a polychrome olla from San Ildefonso Pueblo, while the kachina image the Taos artist is painting derives from Hopi culture. Yet, Virginia points out, despite these tribal references, Couse intended for his painting to celebrate American Indian artistry overall.

Couse’s appreciation of the native artists he encountered was mentioned by Henderson in her article: “Some of the Indians take up painting and do interesting work as long as they stick to the hereditary primitive symbolism. As a realist the Indian painter is a failure. Mr. Couse has in his studio some fine examples of the simple symbolic effects. He says that the Indian is a natural cubist, and often in his paintings he represents a battlefield by many points of horses hoofs and many dots with tails, indicating bullets. This means a ‘heap big fight,’ to an Indian.”

Couse’s collection of Indian artworks and artifacts, many of which show up in his paintings, can be seen by visitors at his Taos studio and home. Virginia leads studio and garden tours from May through October, and arrangements to visit may be made by calling her at 575-751-0369 in the summer or 520-298-4535 in the winter.

This auction of fine 19th- and 20th-century paintings and bronzes totaled nearly $8 million.