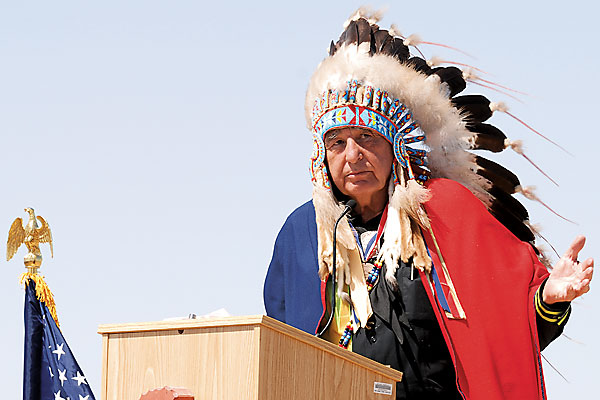 Dozens of honorific titles have dignified the name of Ben Nighthorse Campbell—senator, congressman, judo champion and award-winning jewelry designer. But, on the night of April 27, the only one that counted was Cheyenne.

That night, he, like many others in his tribe, camped in southeastern Colorado near Sand Creek—a place that would be dedicated as a national historic site the next day. Campbell’s efforts as a senator from Colorado led to this designation, but his bloodline brought him to camp there on the eve of the dedication ceremony.

“It was so placid and beautiful,” Campbell says. “Kids were playing, and you could see their outline in the fire. And I kept thinking to myself, ‘I bet it was like that the night before the massacre.’ Because they had no idea what was coming.”

The enormity of what happened at Sand Creek on November 29, 1864, is still hard to fathom, all these decades later. Called “one of the nation’s most profound historic events,” the massacre remains one of the few American military campaigns against Indians repudiated and condemned by Congress. For Indians, it is still an “open wound.”

At dawn on that cold November morning, Col. John Chivington led some 700 Colorado Volunteers to a slaughter of 150 Cheyennes and Arapahos at Sand Creek. The Indians believed they were camping in safety, under the “protection” of a peace agreement, a six-foot-by-12-foot, garrison-sized American flag and a white flag of peace.

Almost every single casualty was a child, a woman or an old man. Chief Black Kettle had felt secure enough by the military promises of safety to send his warriors hunting while their families camped there. Hardly anyone was left behind to fight back. Over the next eight hours, the soldiers unloaded bullets and cannonballs.

Virtually every corpse was scalped; “private parts” were cut off both men and women, and soldiers later showed off these profane “trophies” in Denver. Fleeing Indians were hunted down and slaughtered over a killing field that covered more than a quarter mile. Witnesses stated the creek ran red with blood by the time the massacre was over.

Back in Denver, still just a dusty cowtown, Chivington claimed to have killed some “500 warriors” at the camp, making this “battle” a retaliation, he said, for the Indian wars that had made 1864 such a living hell in Colorado.

To be fair, Cheyennes were among those natives who killed and plundered white settlers in Colorado and Kansas earlier that year, but these were attacks by roving bands of Dog Soldiers, not Black Kettle’s people.

Three separate Congressional investigations exposed Chivington’s lies and labeled his attack a “gross and wanton” outrage. Yet, he and his men never suffered a punishment for the massacre.

The Cheyenne and Arapaho murdered at Sand Creek were never properly buried; their spilled blood having long seeped into the land. That graveyard is now a National Park Service site, dedicated last April near Eads, Colorado.

Many Old West Saviors helped create the Sand Creek Massacre National Historic Site. Prime among them is former Sen. Campbell, who has worked for recognition of Sand Creek since he was elected to the Colorado Legislature in 1982. “The best I could do in the Legislature was get a sign erected on the highway to mark the site,” he says.

Once in Congress, Campbell sponsored a bill to create a national site and to conduct archaeological tests to correctly pinpoint the location of the massacre. Tribal oral history differed with the Park Service locations. As it turned out, the oral histories were more accurate.

Campbell’s efforts were helped by Chief Laird Cometsevah, president of the Sand Creek Descendants Association and a leader of the Southern Cheyenne tribe, and his wife, Colleen. Doing the leg work for the senator was his aide James Doyle, who now heads the National Park Service in Colorado. Campbell’s bill passed Congress unanimously. In October 1998, President Bill Clinton signed it into law.

After studies found the actual site about a mile from where markers had placed it for decades, Congress, in 2000, authorized the acquisition of up to 12,500 acres. So far, some 920 acres have been purchased and another 1,450 acres gifted. The gift land started out as private property owned by rancher Bill Dawson. He sold it to Jim Druck, another savior, who then gave the land to the Cheyenne and Arapaho Tribes of Oklahoma. The tribes conveyed title to the Park Service.

The site is so important because of the “lessons it holds for humanity—lessons in fear and cultural generalizations and misunderstanding. It’s relative to our everyday life because it is an example of what humans are capable of when driven by panic and fear,” Sand Creek Superintendent Alexa Roberts says.

To Ben Nighthorse Campbell, the significance goes far deeper. “Every Cheyenne has an ancestor involved at Sand Creek. It’s in our blood.”

TWMag.com: For another perspective on Sand Creek as a battle, see Gregory Michno’s argument. For an in-depth look on the tragedy at Sand Creek, read Linda R. Wommack’s article.