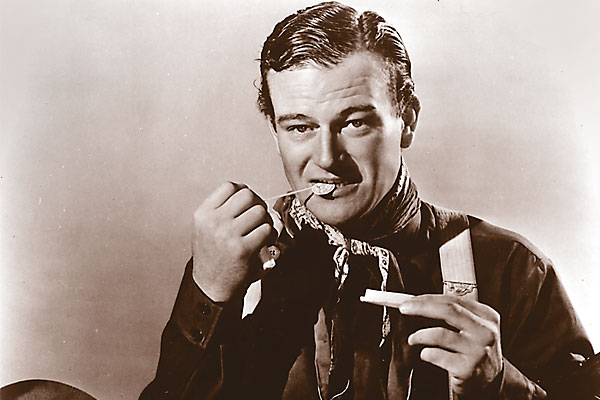 A movie prop weapon can be anything from a totally functional firearm to a “blank-firing only” arm. They can even be a non-gun since some firearms are strictly Hollywood creations designed for the illusion of the camera. These may have been altered in such a way that they would be unsafe to fire—even with a blank load.

On June 5, Little John’s Auction Service in Orange, California, sold prop guns from the Stembridge Armory collection that represented much of Hollywood’s history, from the “Golden Age” of motion pictures to modern times. Despite the presence of guns from classics including Lethal Weapon, Raiders of the Lost Ark, Terminator II, Unconquered, The Wind and the Lion and Rough Riders, the celluloid shootin’ irons used by John Wayne dominated many of the high ticket collectibles. Yet the best sale of them all cost next to nothing.

One of my amigos, after researching John Wayne’s films, was fortunate enough to acquire a “sleeper” at the auction. Although the 1892 Winchester was advertised in Little John’s catalogue as being listed “on True Grit paperwork,” only my astute friend recognized the carbine as one of two rented to Universal Studios specifically for John Wayne. He bought this Rooster Cogburn trophy for $2,300. What a bargain.

The high ticket Wayne firearms that sold at auction included a backup to Wayne’s personal six-gun, a 4¾-inch Colt Peacemaker rented by Stembridge and featured in Wayne’s Oscar-winning performance in 1969’s True Grit and the later 1975 sequel Rooster Cogburn; it sold for an $81,000 bid. The 1847 Colt Walker the Duke used in True Grit fetched $32,000. (That lucky buyer got a two-for-one special:?The revolver was also wielded by Clint Eastwood in The Outlaw Josey Wales.) A Colt Single Action with a modified hammer for fanning, reportedly used by the Duke in his 1962 Oater The Man Who Shot Liberty Valance, gaveled at $26,000.

The Han Solo Star Wars blaster that sold for $180,000 ended up as the top lot, but next in line was a .32-20 caliber, 1892 Winchester carbine. Stembridge document-ation states it was one of the big-loop Winchesters carried by a young John Wayne in the 1939 classic Stagecoach. This Wayne lever gun sold for a whopping $115,000.

The Ringo Kid was right: “There are some things a man just can’t run away from.” Even after all these years, we still can’t resist collectibles linked to the Duke.