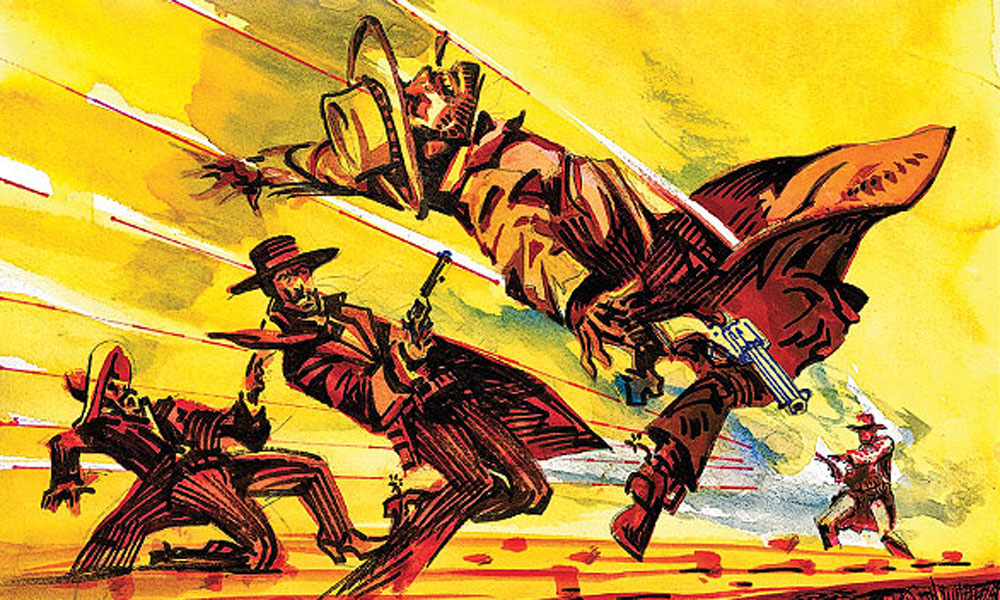 The classic opening scene that Sergio Leone called the “summa” of his career was ambitious and complicated, and it wasn’t the easiest of shoots. With three successful Westerns under his belt, Leone had big plans for the fourth.

“I wanted to say farewell to the three characters from The Good, the Bad and the Ugly and to do so in style…. So I hoped that the three pistoleri who are killed by Charlie Bronson at the beginning of Once Upon a Time in the West would be Clint Eastwood, Lee Van Cleef, and Eli Wallach. The other two agreed, but Clint was the only one who didn’t want to do it—so there wasn’t any point in using Lee Van Cleef and Eli Wallach. It wasn’t a question of expense—he just couldn’t see the funny side of it…,” said Leone, the legendary Italian director who crafted the so-called Dollar trilogy that made Eastwood an international star.

“The dusters were a mania of [Sergio’s], and they became a mania of the time as well,” said Carlo Simi, production designer. “We went to look at costumes at Western Costume in California, and we happened to find these beautiful dusters, which were dustcoats for riding. They had also been shown in the film by John Ford, The Man Who Shot Liberty Valance, in the flashback. They were white, so we changed them to chocolate brown. Before we changed them, they looked like they were worn by ice cream vendors.”

A Hollywood production keeps extra costumes around as insurance. When Eastwood showed up in Spain for his first assignment, 1967’s A Fistful of Dollars, he was somewhat amused that the main actors didn’t have duplicate costumes: two hats, two vests, two pairs of pants, because a vest might get torn in a fight scene, or a hat run over by a train during a take. Not so with the Italians. As we shall see, this costume arrangement gets pretty bizarre by the end of shooting the opening for  Once Upon a Time in the West.

Toward the end of the four-day shoot, Mulock jumped, while wearing his costume, from the balcony of his hotel room in Guadix, Granada, Spain; a crew member saw him fall past the second or third floor of the hotel before he hit the street. Before the actor got taken away in an ambulance, Leone shouted, “Get the costume; we need the costume!”

During the bumpy ride to the hospital, Mulock’s broken rib pierced his lung, and he died. To finish the shoot, Leone outfitted a crew member in Mulock’s costume. In several of the iconic shots of the trio standing on the platform, you can see Knuckles looks a little off.

No one knows why 41-year-old Mulock committed suicide. Born in Toronto to one of the wealthiest families in Canada, Mulock studied with Lee Strasberg and later started, with David de Keyser, the London Studio, which taught ‘’The Method’’ to British actors. His film and TV credits included projects that ranged from 1967’s Hellbenders to 1959’s Tarzan’s Greatest Adventure and 1965’s Dr. Terror’s House of Horrors to 1966’s Lost Command.

One crew member claimed Mulock was a drug addict who jumped to his death out of desperation, because he couldn’t acquire drugs in the isolated filming location.

The Sounds of Silence

As for the squeaky windmill, Leone got the idea to include the natural sound from film composer Ennio Morricone, who told him: “I’d been, some time before, to a concert in Florence where a man came onto the stage and began in complete silence to take a stepladder and make it creak and squeak. This went on for several minutes and the audience had no idea what it was supposed to mean.

“But in the silence the squeaking of this stepladder became something else, and the philosophical argument of this experiment was that a sound, any sound at all from normal everyday life—isolated from its context and its natural place and isolated by silence—becomes something different that is not part of its real nature.”