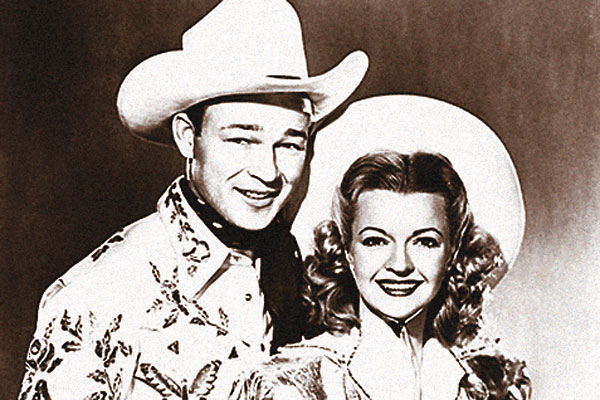 “Roy Rogers and Dale Evans came riding (in a jet) out of the sunset to Tampa yesterday to oversee a weekend shooting contest at River Ranch Acres, near Lake Wales.

“Roy was wearing his famous white hat, and Dale was chic in a royal-blue suit, and everyone was happy to see ’em. There was even a bouquet of roses for Dale,” reported the St. Petersburg Times on December 9, 1966.

Sponsored by Winchester as part of its centennial celebration, the three-day National Claybird Tournament had flown out the famous Westerns actors so Roy could serve as grandmaster for the competition that would determine the nation’s best shooting team. Local champions were packing their bags for the round trip charter flight they won, which would take them from New York to London on BOAC’s VC-10 jet; regional winners were scoping out the best spot in their yards to place their new family-sized swimming pools from Olin Mathieson Chemical Company (which had merged its Western Cartridge Company with Winchester Repeating Arms Company by 1935); and regional runners-up were revved up on their Suzuki Hill-Billy mopeds. For the five national champions who would win the competition that December, their prize was a custom made, Pigeon Grade Model 21 Winchester Shotgun.

Roy and Dale were avid sport shooters themselves, so Winchester presented them with two custom built Model 21 Grand American shotguns—a kickstarter 12 gauge for Roy and a 20 gauge befitting a sport shooter hunting small game for Dale.  Both of these presentation firearms hammered in as the top Roy Rogers-Dale Evans Museum lots during Rock Island Auction’s September 11-13, 2009, sale. The 20-gauge shotgun sold for a $40,000 bid, while the 12 gauge sold for $37,500.

The “First Winchester,” the Model 1866 repeating rifle, was not replicated at the New Haven, Connecticut, plant for the centennial, although Italy marketed its Model 1866 replica in the U.S. in 1973. Instead Winchester announced in January 1966 that it would refine its sporting firearm, the Model 94 lever action, into a Centennial ’66 Model, as a carbine and a full-length rifle. By close of the National Sporting Goods trade show in February, Winchester had sold all the Centennial ’66 Models it could conceivably make that year, limiting the production run to 102,039.

To close out its 100th year, the factory looked to its first double barrel shotgun manufactured at the New Haven plant, the Model 21. (Their previous double barrel shotguns were English imports released under the Winchester name.) The hammerless shotgun was produced in 12, 16, 20, 28 and .410 gauge from 1931 to 1960, and then made in its Custom Shop until 1982 in three styles: Custom Grade, Pigeon Grade and Grand American. By then, the New Haven plant had reincorporated as U.S. Repeating Arms Company and Pigeon Grade was dropped from the line. Custom orders for the remaining Model 21 shotguns were produced in New Haven until 1993.

The value of one of these custom built guns depends on two factors: the amount of engraving present on the firearm and whether the shotgun was produced in the Custom Shop era of 1960-82 or Pre-Custom Shop of 1932-59, according to Cowboy Action Shooting: Gear, Guns, Tactics by John Taffin. Pre-Custom Shop shotguns are 10 to 20 percent higher in value, and those with full-coverage game scene and scroll engravings sell higher than those with a small amount of scroll.

Since presentation firearms are one-of-a-kind and presented in recognition of an individual, they usually garner much more on the market. For instance, a 20-gauge Winchester Model 21 in excellent condition with factory letter dating the shotgun to 1948 hammered in at this same auction for $5,500, roughly $35,000 less than Dale’s 20 gauge, despite the former being made in the higher-valued Pre-Custom Shop days.

Beyond the different gauges and serial numbers, the Roy Rogers and Dale Evans Model 21 shotguns are exactly the same. The gold-plated single trigger has engraved on the rib “Custom Built by Winchester for Roy Rogers,” while the stock has “Roy” engraved over “Grand American” on the steel grip cap and “Dale” engraved on a brass presentation plaque on its lower section. Overall, 98 percent of the shotgun is engraved in a vine and floral pattern with seven gold factory inlays. The notable inlays include: a ring-necked pheasant in flight flushed by Roy’s hunting dog Sam; a cowboy firing a shotgun in front of a trap house; and the couple’s famous TV companions, their German Shepherd Bullet and Roy’s palomino horse Trigger.

By the time Roy and Dale received these presentation firearms, they had retired from show business to Apple Valley, California. When they arrived in Florida, the media pressed them to no avail about their plans to launch Roy Rogers Western World, which was to complement Disney’s proposed project west of Orlando (Disney World would open in 1971). The next year, 1967, they opened their museum at home, moving it to nearby Victorville in 1976. This, in effect, left the Western World project in the dust. In 2003, after the passing of Roy (1998) and Dale (2001), the family moved the museum to Branson, Missouri.

After six seasons in Branson, the Rogers family made the difficult decision to close the Roy Rogers-Dale Evans Museum this October due to a declining audience and an uncertain economy. For those who have visited, the museum was a trip down memory lane. The Jeep Nellybelle. Dale’s first photo session. Studio costumes. Pictures from Roy’s early days with the Sons of the Pioneers musical group. Parade saddles. Fan mail. The couple’s personal firearms and gunleather collection. And, of course, Roy’s beloved Trigger, stuffed and rearing up on his hind legs, rounded out the lifetime of Happy Trails experienced by the King of the Cowboys and his Queen.