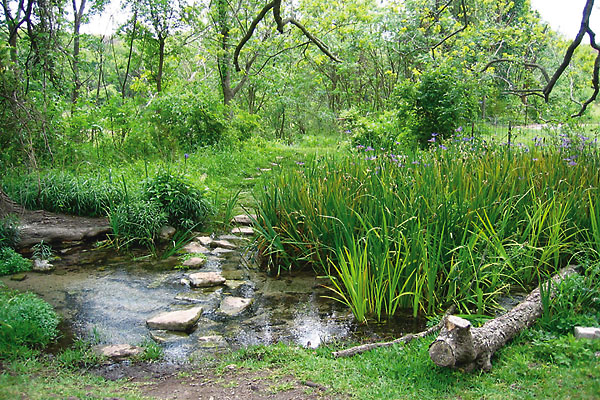 The defining features in the 4,440-square-foot Georgetown, Texas, home of historians Robert Utley and Melody Webb are the bookshelves.

Their custom house constructed in 2000 and finished by Joe Reynolds, who had built an earlier home for the couple, needed to serve the two historians, all on one level.

“The place we wanted could be fitted onto the 1.5 acre lot, barely,” Utley says. The property has an unobstructed ground-floor view of Lake Georgetown and adjoining Corps of Engineers parkland, essentially wilderness.

That feeling of space and wilderness certainly appealed to the couple. Utley had a distinguished career as chief historian for the National Park Service (NPS), while Webb had also served with NPS in various capacities, including as superintendent of the Lyndon B. Johnson National Historical Park in central Texas and as assistant superintendent of Grand Teton National Park in northwestern Wyoming.

Her earlier service at LBJ park drew them back to the Texas Hill Country following Webb’s retirement in 1996. They lived in a smaller house for a few years but found it “not very satisfactory” nor adequate to serve the needs of two working historians as both, though no longer involved with the NPS, were continuing their careers as writers.

Now they share a huge office with an adjoining reading room and bath. Their desks, which are connected by a credenza, face each other from a distance of about six feet apart. On one wall are built-in file drawers and a large metal map case; on others are bookshelves and enclosed storage.

For the couple’s extensive collection of books, the book space in the study was not enough, so they created a separate room for a library. “I can’t tell you how many feet of book shelf we have, but it did at one time hold 5,000 books,” Utley says. “Virtually all, in the study, the library and the ‘Great Room,’ had books on them, plus [more books were] on some shelves in the enclosed spaces below the exposed shelves. Oh yes, we had two free-standing bookshelves in the master bedroom and three in a guest bedroom.”

While they may have needed walls for bookshelves, the couple also likes open living space, so no walls separate the kitchen, the dining room and the living room; that portion of the house is their “Great Room.”

Placed before a mirror embedded into the bookshelves in the Great Room are some of Robert’s awards: three bronze Wranglers from the National Cowboy and Western Heritage Museum in Oklahoma City, plus the bronze bison Owen Wister Award for Lifetime Achievement from Western Writers of America.

Oversized oak cabinets in the kitchen are set off by Santa Cecilia granite countertops with speckles of gold and by oak laminate flooring with oriental carpets to provide accent.

Their large master bedroom features an adjoining bathroom with a walk-in shower and Jacuzzi, double his-and-her vanities and a dressing room. As a split bedroom design, the other two bedrooms are on the opposite side of the house. One serves as a guest bedroom, while the other is a workout room, complete with treadmill, rowing machine, hoist and free weights.

When Robert was in the “early stages of 10 years [spent writing his] two books on the Texas Rangers,” Melody bought the sculpture, Ain’t But One Riot by Tom Moss, which is now a focal point in their living room. “He resembles so much Ranger Capt. Bill McDonald that we have ever since called him simply ‘Cap’n Bill,’” Utley says.

Another symbol of Texas is a permanent part of the home exterior. Pool decking covers the entire concrete porch wraparound as well as the back deck overlooking Lake Georgetown, providing substantial and attractive flooring. The “Lone Star” of Texas in blue at the front entryway is worked into the decking in the same material.

Other decorating touches related to their work as historians include a photograph of Crow scouts among the headstones at Montana’s Little Bighorn Battlefield, which was presented to Utley during a lecture series at the University of Wyoming in 1994. Another piece of art is the celebrated Anheuser-Busch Custer’s Last Fight, which was shipped to Utley at Crow Agency by Anheuser-Busch during his first of six summers as ranger-historian at Montana’s then-Custer Battlefield National Monument in 1947.

Over the fireplace is a painting of an Arizona desert scene by artist William Scott Jennings, which Webb purchased as part of a silent auction display in an “Arts in the Parks” exhibition at Jackson Lake Lodge in 1995, when she was working at Grand Teton National Park.

“Otherwise, neither of us has been a collector, of books or artwork. For books, we are interested in content, and the edition or binding is of no consequence,” Utley says.

Although they had an extensive library, the couple downsized it in anticipation of selling their home and relocating to Scottsdale, Arizona, where they will be nearer to Melody’s family.

Utley sold his 900-volume collection of Custer, frontier army and Indian books and Webb donated about 900 books to the Georgetown Public Library, yet both writers have retained materials needed for researching upcoming books; Utley’s next project is a biography of Apache medicine man Geronimo.