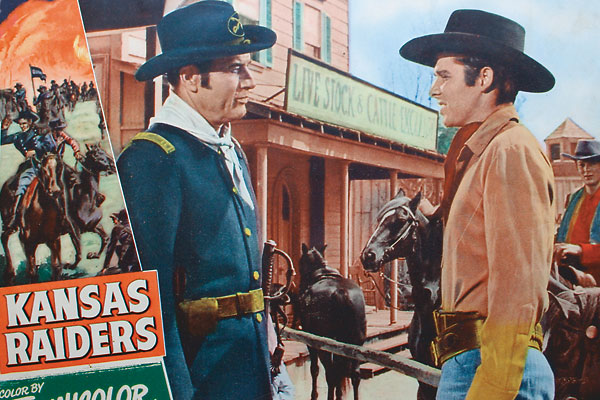 I asked for a pony one Christmas. A palomino, if memory serves, but I would have settled for a sorrel. I didn’t get it.

I didn’t get that Fort Apache playset made by Marx either, but my cousin Mark did, and you can’t tell me he was better than I was that year.

Oh, don’t get me wrong. Santa has been good to me. I got a pair of Dave Little boots, and you can’t tell me I was that good that year. I also would have gotten a sack of ridiculously expensive beef jerky if my basset hound hadn’t sniffed it out first.

I’ll keep on wishing, of course, and in the spirit of the season, here are a few items I wish someone would make so that they can be placed under my tree.

ROBERT TAYLOR’S WESTERNS DVD SET: Most movie fans remember him, if they remember him at all, from Ivanhoe or Quo Vadis. I liked him better in Rogue Cop. But Taylor also made some great Westerns. A few titles, Saddle the Wind, The Law and Jake Wade, have shown up on DVD. Yet three of his best—three of the best Westerns overall, in fact—remain hidden in obscurity. So wrap up restored versions of Devil’s Doorway, Westward the Women and The Last Hunt for me, along with the not-so-great Billy the Kid and Ambush.

AUDIE MURPHY—THE COMPLETE SET ON DVD: No, he couldn’t act, even when playing himself (To Hell and Back). Yet America’s most decorated war hero deserves a box set. He played Billy the Kid in The Kid from Texas, which, of course, is one place we’re sure Billy wasn’t from. Murphy hit his stride (not much of a stride, but a stride) in the late 1950s and early ’60s with turns in No Name on the Bullet, The Unforgiven (his best performance) and Six Black Horses. Special feature: Any viewer who can sit through The Battle at Bloody Beach wins one of Audie’s WWII medals.

CLAIR HUFFAKER BOOK COLLECTION: Leisure Books has done a great job with its Classic Film Collection, reissuing paperbacks such as The Searchers and Destry Rides Again, but I’d like to see Clair Huffaker back in print. Two of his novels, Posse from Hell, Seven Ways from Sundown, became Audie Murphy movies. His novel Flaming Lance became Flaming Star—a pretty good Elvis movie. Likewise, his novel Guns of the Rio Conchos was turned into a really good Western Rio Conchos, Badman became the fun Western The War Wagon and Nobody Loves a Drunken Indian became Flap, a film that really misfired. Somebody should have made The Cowboy and the Cossack into a movie—maybe starring Bruce Boxleitner.

HEC RAMSEY RETURNS: Speaking of Bruce, a while back he was telling me that what we really need is a new Westerns series on TV. Of course, since nobody in Hollywood has an original idea anymore, let’s remake Hec Ramsey. It aired as one of NBC’s Sunday Mystery Movies in the early 1970s—think Columbo and McCloud. Today, you pitch it as CSI: In the West. You cast Boxleitner as Hec Ramsey, originally played by Richard Boone. Then you cast Wes Studi as Doc Coogan. That will give me more ammunition against Studi, who still owes me a green chile cheeseburger for getting him that role as Joe Leaphorn on PBS’s Mystery!