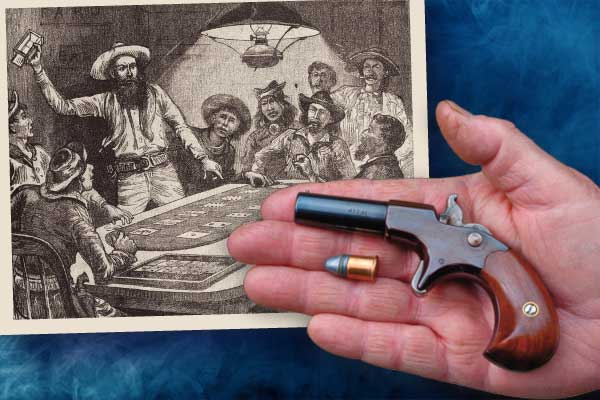 “Don’t move,” ordered the thug with the heavy revolver, as he shoved its muzzle into the surprised and helpless detective’s chest. “I’m on to  you, and you’re gonna get it!” he went on, as he fingered the trigger of the big double-action six-gun.

Then something crashed against the door. The gunman turned his attention to it. For that split second his eyes left the detective to look at the door, the officer dropped to one knee and pulled a palm-sized pistol from his ankle holster.

In a single swift motion, the detective thrusted his gun hand upward, squeezed the spur trigger of his .41 Short Rimfire derringer and fired it point blank against the desperado’s chest.

The thug jerked backward and dropped to the floor as the 130-grain lead slug plowed into his chest. Often considered a somewhat ineffectual round, the .41 Short Rimfire had done its work well. The outlaw lay helpless, choking on his own blood and taking painful breaths. In a few short moments, he died.

Sounds like a tale out of the Wild West era doesn’t it? Not so! I heard this tale in the mid-1980s, from an undercover detective working the vice squad in a suburban Illinois town. He had contacted me after reading my article about modern replicas of the single-shot Remington Deringer Pistol (Elliot’s Patent), originally manufactured by E. Remington  & Sons and produced circa 1867-1888.

In 1982, the now-defunct Ramshorn Gun Manufactury, out of Warren, Ohio, sent me a cased pair of these little “Mississippi” one-shooters to evaluate. Impressed with the quality of the handgun, and the fact that someone had invested time and finances to reproduce the archaic firearm, I tested them for my Black Powder column in Guns & Ammo Magazine.

During my shooting session with these replicas, I stoked them with Navy Arms Company’s then-newly manufactured .41 Short Rimfire smokeless ammunition (no longer produced). In a penetration test, the bullets tore through 13 inches of thick clay from a distance of 10 inches. Both surprised and impressed with this performance, I gave the guns and ammo a favorable write-up.

Shortly thereafter, I received a call from the detective, who wanted to know how he could acquire one of these handguns. He told me he felt the Remington Deringer would serve him well as a backup weapon in his undercover work. I cautioned him that these firearms—though well made—had no safety mechanisms; they were strictly made as “curios” for gun enthusiasts and probably would not be optimal for such dangerous work. With those caveats, I gave him the information he requested.

Fast-forward about a  year later, and I received a follow-up phone call from the detective, thanking me for assisting him in his quest for a Ramshorn Mississippi derringer. He shared the tale I related earlier, of how one of these pocket guns had saved his life and put a bad man out of work—permanently!

Although these Remington-Elliot Deringer replicas are no longer being produced, you might contact gun brokers to see if any have Ramshorn derringers for sale. I still maintain that such antiquated-type guns—and the .41 Short Rimfire cartridge—should be enjoyed solely as historical reminders of the arms and ammunition of yesteryear.

At the same time, I have often reflected on this detective’s hair-raising story. I definitely have gained a new respect for these little guns and the supposedly “impotent” .41 Short Rimfire ammunition.