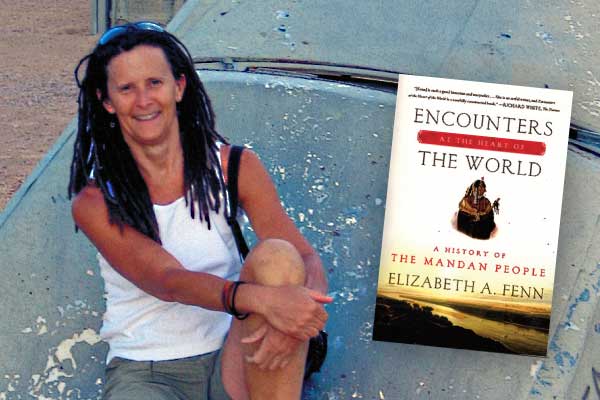 If I had been a member of the Corps of Discovery, I would have brought my own vial of smallpox vaccine. Meriwether Lewis’s supply lost its potency and was therefore useless. Had this not happened, he might have protected some native peoples against the epidemic of 1837-38.

The history of smallpox in early America is horrific. I know that some have questioned the wisdom of eradicating a species—the smallpox virus—from the planet. But I, for one, am heartily glad for it.  (To be clear, stocks of the virus still do exist, but the disease itself has been eradicated.)

If Lewis and Clark visited ancient Mandan settlements today, they’d find some swept away by the Missouri, some ground into gravel for road building and some still standing in testimony to a people whose history is much older than that of the U.S.

A Western historian everyone should read is Elliott West. He’s the best there is.

George Catlin’s artwork is intriguing and beautiful, but problematic. He had some out-there ideas about American Indians, and he sometimes played fast and loose with the facts.

I was part of that first generation of girls to benefit from Title IX. I played every sport I could, shifting with the season—field hockey in the fall, basketball in the winter, softball in the spring and summer. My dad was fabulous about encouraging me.

Dropping out of graduate school gave me space to explore. I learned to fix cars, and I read whatever I wanted to read.

Working as an auto mechanic taught me to own my mistakes. When an exhaust manifold bolt snaps off in a cylinder head, all you can do is fix it and move on.

The best part of being a historian is research. Research is like time travel. We immerse ourselves in evidence left behind by our predecessors, and we try to make sense of their world.

My earliest interest in history began at Duke in 1979, when Nazis killed five Communist Workers’ Party demonstrators during the Greensboro Massacre. The Klansmen were acquitted, which blew my mind. How did we get here?

While researching Encounters at the Heart of the World, I learned patience and humility. As my Mandan friend Cedric Red Feather taught me about the Okipa ceremony, my ego and impatience hindered my understanding. Not until six months before I submitted the final manuscript did I grasp what Cedric meant. Thus, Encounters took a long time to write. But time made it better.

People would be surprised to know Mandan women sometimes sang to their gardens to help their corn stay happy and grow.

If I wasn’t a historian, I’d be a welder or a fiction writer, an engineer or a massage therapist, an actor or a race car driver, or maybe a high school coach.

My favorite fiction author is the French writer Jean Giono. He penned The Horseman on the Roof, about a nobleman’s journey home during a cholera epidemic.

The freedom of the mountains is overrated. I’m a huge fan of the Great Plains, home of the Mandans, among other tribes, and of Carhenge (see photo of me at the vintage automobile site in Nebraska).

“Winning the Pulitzer is like a bolt of lightning out of the clear blue sky,” says Elizabeth Fenn, who received the Pulitzer Prize in History this year for Encounters at the Heart of the World, which analyzes Mandan history from 1100 to 1845. She has a Ph.D. from Yale University, and she is the History Department Chair at University of Colorado in Boulder. Her field of study is the early American West, focusing on epidemic disease, American Indians and environmental history. She is married to historian Peter Wood.

Elizabeth Fenn received the Pulitzer Prize in History in 2015 for Encounters at the Heart of the World, which analyzes Mandan history from 1100 to 1845. She has a Ph.D. from Yale University, and she is the History Department Chair at University of Colorado in Boulder. Her field of study is the early American West, focusing on epidemic disease, American Indians and environmental history. She is married to historian Peter Wood.