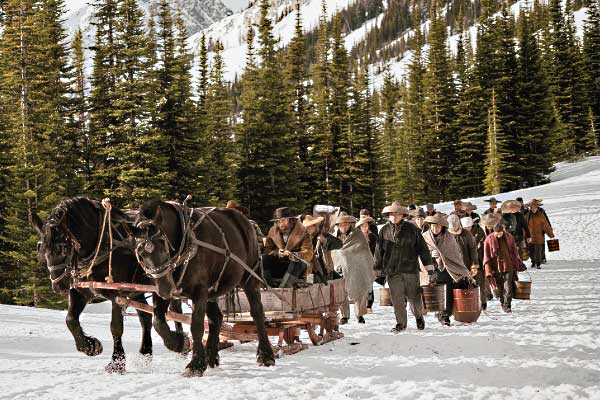 If this is the new Golden Age of television, the Emmy-nominated Hell on Wheels, created by Tony and Joe Gayton, with its feast of characters and unsurpassed writing and direction, is one of the surest proofs.

Hell on Wheels has been telling the story of constructing the Transcontinental Railroad through the jaundiced eyes of foreman and former Confederate slave owner Cullen Bohannan (Anson Mount). The show’s days, and episodes, are numbered. The final 14 shows will be divided in half: seven this summer and seven in 2016.

Westerns, big screen and small, are undergoing an unmistakable resurgence. But when Hell on Wheels began in 2011, Westerns couldn’t get arrested. How much credit does this railroad drama deserve for the reboot?

“That’s impossible to say,” admits Mount, who was two-thirds of the way through filming when he talked to True West. “There was some hesitancy to get into the genre on the part of television because people chase each other’s tails, and it hadn’t been done for a while. Maybe it did spark a reemergence in the genre; who knows? But it’s never gonna fully die: it’s our martial arts film.”

He’s philosophical about the series ending. “It’s time. I think we found a really good through-line to finish the story.”

The final season five has a theme. Season one’s was “revenge,” while season two’s was “ambition.” “I hate this word, because it is often misused or misinterpreted, but ‘redemption,’” Mount says. “And I don’t think the theme of ‘hubris’ has ever not been a part of the show.”

Although the end-point was always known, the route to get there, though blasted through rock, was not etched in stone. “Nobody really knows at the start of the season what’s going to play out,” Mount says. “You have some ideas up on the board; you may even have an ending in mind. If we’d started season three telling the network Cullen was going to end up married to a Mormon girl in a Mormon fort, they’d have flipped out, and so would we. But that’s where the season took us.”

The series, like the railroad, has a high death toll. “You build relationships, and a storyline can end that very quickly,” Mount says, about the last season. “Common [who played former slave Elam Ferguson] is one of my favorite people I have ever worked with. He had interests in other areas, and we found the best way to write him out. He did a heck of a job. And Kasha Kropinski [who played Ruth, the minister’s daughter] was great to work with; she gave a heck of a performance in that final episode.”

His favorite character to act with? The most wicked of villains. “It’s been so much fun to plot that out with Chris Heyerdahl [the Swede],” Mount says. “He’s a phenomenal scene partner. Things seem to crackle and spark when we get into a scene together.”

After four seasons of filming the Union Pacific’s race to Utah’s Promontory Summit, where the Union Pacific and Central Pacific joined rails on May 10, 1869, the show’s focus has switched to the rival Central Pacific. “You can’t really tell the story without showing both sides,” Mount says. “[Showrunner] John Wirth wanted to show the Chinese experience in building the railroad. We’ve been as exacting as we can, to the extent that we’re solidly all Cantonese, and not Mandarin.”

What does Mount plan to do when he stops working on the railroad? “I wouldn’t do Cullen again,” he says. “I’d totally do another Western; there’s not a better genre. I like that it allows me to work outside.”

Famous Westerns director John Ford would agree. He didn’t call his films Westerns, but “outdoor pictures.” Mount saw a transition in Ford’s art when he made that switch: “Ford’s best pictures weren’t until he started moving outside. Look at Stagecoach: I honestly don’t think it holds a candle to My Darling Clementine, and for an obvious reason; he was stuck in a studio.”

But like Ford did many times, Mount has to move on to his next picture. “I’m really going to miss this crew,” Mount says. “They’re the best; they know the Western genre better than any crew knows any genre. I’ll also miss riding the horses—best part of the job. What I won’t miss are the elements.”

Last year, production was delayed when storms washed away the sets. “You know, it’s hard not to get the crap beat out of you working on this show,” the actor says. “I won’t miss the bumps and bruises, but it’s hard to come up with something bad about this job. It’s really been wonderful.”