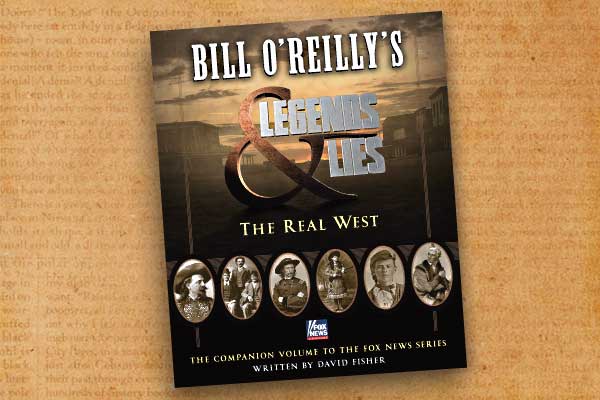 Historians and aficionados of the American West must have been surprised when they first heard that FOX News’s Bill O’Reilly was going to follow up his latest book, Killing Patton, and his FOX television production, Killing Jesus, with a docudrama series and companion book on the Old West. I wasn’t. I thought it was a brilliant idea.

O’Reilly and his team know that the history of the American West is culturally popular across generations and throughout the world. His choice is revealing because it is counterintuitive to the current Hollywood film and television studios that don’t seem to remember—or understand—that popularity. Best-selling and highly versatile author David Fisher was honored—and at first surprised—to be called at the eleventh hour to write the television series’ companion book Bill O’Reilly’s Legends: The Real West (Henry Holt and Company, $32). Fisher said, “I love history, and the opportunity to write about the American West and work with O’Reilly’s team was a very positive experience—as well as challenging to write the book in a short turnaround.”

Fisher’s assignment was to adapt O’Reilly’s interpretation of the series’ 12 biographical segments about iconic Western men and women, into a well-researched, heavily illustrated, readable book that met his own standard—as well as O’Reilly’s. Fisher, a renowned author and journalist, who has published over 40 books, including co-authoring Mike Earp’s U.S. Marshals: Inside America’s Most Storied Law Enforcement Agency, knew that these biographies would receive critical scrutiny from experts who have spent decades researching the Western figures. In his introduction O’Reilly writes that the reader “will know the truth about America’s lively and unique past. You will have also learned about some lies that still circulate today. Debunking falsehoods is a major theme here.”

According to Fisher, True West’s website archive was a primary resource for his research, and many times, an article on the site was the final arbiter of quotes and conclusions on his cornucopia of Old West icons. Equally impressive is Fisher’s research, with many of the conclusions reflecting the opinions of True West contributors, including historians and authors Chris Enss, Dr. Paul Andrew Hutton, W.C. James, Hampton Sides, Marshall Trimble, Victoria Wilcox and WWA President Sherry Monahan, who were all interviewed as expert commentators for the series.

At press time, Legends & Lies had been at or near the top of the New York Times hardcover non-fiction best-seller list since it hit bookstores in early April. A lot of controversy had rumbled through the airwaves and social media about the book and series. (Some criticisms are highly justified, like the incorrect photo of Doc Holliday on page 218, as well as the suggestion that Pat Garrett did not kill Billy the Kid.) But like The West: An Illustrated History—the companion book to Ken Burns’s 1996 PBS series, by Geoffrey C. Ward and David Duncan—Legends & Lies has achieved the highest profile of any 2015 book about the history of the American West. Whether you wholeheartedly agree with the series and book’s conclusions—or vehemently disagree—Legends & Lies has brought the West alive—the good, the bad and the ugly—for a new generation.