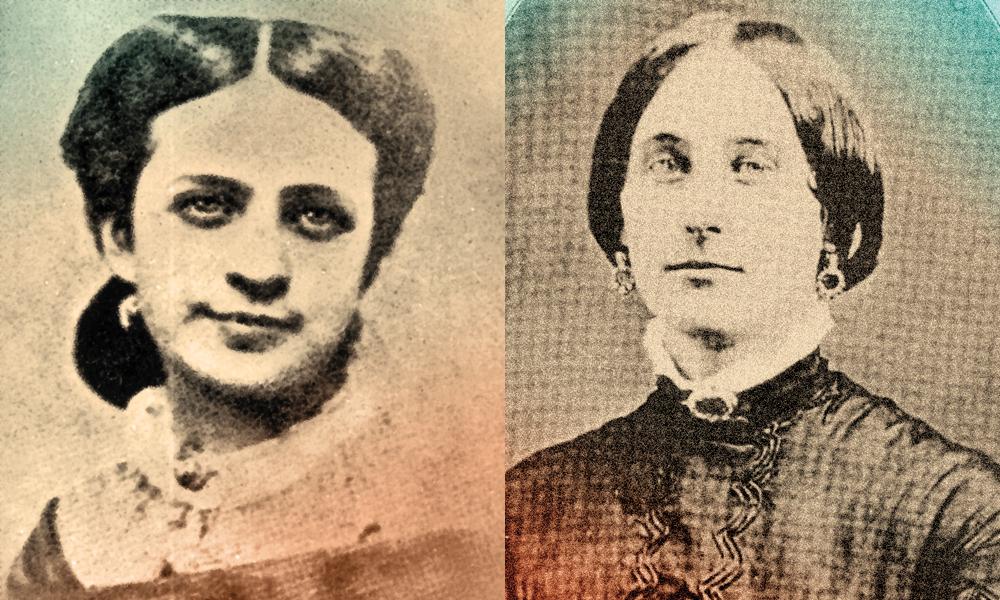 As the small train of wagons drew within sight of Fort Phil Kearny, the weary travelers rejoiced. “I could have clapped my hands for joy,” one wrote of the moment.

On the wind-blown hill overlooking the fort, a picket guard waved a signal flag to announce their arrival. He waved a second signal the newcomers did not understand.

A mounted escort fell in line with the wagons, halting just outside the eight-foot-high pine trunk stockade that encircled the fort near present-day Buffalo, Wyoming. A “strange feeling of apprehension” came over the travelers as another wagon entered the fort ahead of their party. In that wagon, the travelers saw the scalped and naked body of a man “scarcely cold.”

Frances Grummond swallowed back the scream that filled her head: “Let me get within the gate!”

In the nearly four months she lived at the fort, Frances never shed her feeling of apprehension. The comely Southern belle was 21, married for little more than a year to one of the officers newly stationed to the fort. She was three months pregnant when she arrived and within another two months, she would be a widow.

Yet her account of what happened 150 years ago this month—along with that of her friend Margaret Carrington—would foster one of the great and enduring myths of the American West.

Today most know the tragic event as the Fetterman Massacre. On December 21, 1866, Capt. William J. Fetterman led a force of 80 men from Fort Phil Kearny to relieve a wagon train of woodcutters under attack by Indians.

A coalition of tribes brought together by Lakota Chief Red Cloud had been harassing the fort since its construction that July, killing 73 men during raids. Civilian workers bore the brunt of the losses, most of which came one or two at a time. The Lakota, Cheyenne and Arapaho Indians rarely lingered in the face of an organized military response.

This day was different.

Fetterman led 49 infantrymen, while Lt. George Washington Grummond commanded the 30 men on horseback. Before the relief force could reach the wood wagons, the Indians broke off their attack. Rather than return to the fort, Fetterman circled back over Lodge Trail Ridge in an apparent attempt to cut off the Indians’ retreat.

The Indians had anticipated the maneuver. Hidden on the other side of the ridge were as many as 2,000 mounted warriors. Lured on by a band of 10 decoys, which may have included a young Crazy Horse, the soldiers descended into the valley along the Bozeman Trail that led to the goldfields around Virginia City, Montana Territory.

Once the soldiers were far enough into the valley that retreat would be impossible, the Indians sprang their ambush. They killed all 81 men while suffering minimal losses and mutilated most of the bodies beyond recognition.

The “Fetterman Massacre” went down in history as the worst defeat the U.S. Army suffered during the Indian Wars at that time, the climax of what came to be called Red Cloud’s War, the only war the Army lost to the Indians.

George Armstrong Custer’s so-called “Last Stand” 10 years later relegated the Fetterman fight to a historical footnote, but in 1866, the killings shocked the country. Politicians and the Army’s hierarchy were united in their need for a scapegoat.

They found one in the fort’s commander.

Colonel Henry B. Carrington had never seen battle, having spent the Civil War as a recruiter and administrator. A stooped, thin man with a high forehead and soft, dark eyes that looked sad even when he smiled, Henry, then 42, more resembled the lawyer he had been before the war than the commander of a frontier post.

When Henry had announced his intention to wait until winter to take offensive to the Indians, some of his men grew impatient. The colonel had reasons to delay. He understood the tribes would be weaker in the winter, and he needed time to train his men, most of whom were equipped with outdated, muzzle-loading Springfield rifles. When they had first arrived at the fort, Carrington’s troops had so little ammunition, they couldn’t even drill with target practice.

Yet the Indians’ harassment ground down the men’s morale. Behind Henry’s back, his troops questioned his courage. Their testimony in the investigation that followed the defeat effectively ended Henry’s military career. He would devote the last four decades of his life to clearing his reputation.

In that endeavor, he had a secret weapon: the two women he loved.

Margaret Irvin Carrington arrived at the fort with her husband in July. She maintained a journal and proved a gifted writer and keen observer. Her account reads like the travelogue of a naturalist—until events conspired to make it an adventure story.

In her telling, published two years later, Fetterman disobeyed direct orders from her husband. Margaret praised Fetterman as a “brave soldier” with “gentlemanly manners,” but portrayed him as a Greek tragic hero, his “contempt of the enemy” driving him to ruin. She quoted him as saying “a regiment could whip the whole array of hostile tribes.”

The quote would prove key to the Fetterman myth.

Two years after the publication of Absaraka: Home of the Crows, Margaret died from tuberculosis. On hearing of her death, Frances Grummond wrote her condolences to Margaret’s husband, Henry. Their correspondence led to courtship and marriage, with Henry adopting the son George Grummond had not  lived to see.

Frances proved just as able a defender of her new husband’s reputation as was Margaret. She published her memoir, My Army Life and the Fort Phil Kearny Massacre, in 1910. Frances wrote that she had heard Henry deliver the order Fetterman was accused of disobeying: “Under no circumstances must you cross Lodge Trail Ridge.”

Both books provided primary source material that shaped subsequent accounts written by historians. Henry did his part as well, proving an eager collaborator with anyone writing on the subject, until his death in 1912.

Cyrus Townsend Brady, whose book, Indian Fights and Fighters, was published in 1904, introduced a twist on Fetterman’s boast, probably with Henry’s input. He clarified the number of men Fetterman boasted could take down the Indians, stating Fetterman said he needed just “80 men”—the exact number who died alongside him. Afterwards, nearly every account turned Fetterman into a preening braggart: “With eighty men, I could ride through the entire Sioux nation.”

How fair were these accounts? Later historians noted that Fetterman’s war record contradicted the view of him as an arrogant officer who placed his command in mortal danger. A fellow officer described Fetterman as having great respect for orders. An enlisted man said Fetterman was “always looking out for” and “seeing to the needs of” his men.

If one needs a villain for the defeat, war records provide a better candidate.

Grummond, who led the cavalry that day, had barely escaped with his life after riding headlong into an Indian ambush two weeks earlier. He had been relieved of his command during the Civil War for similar recklessness and was court martialed on charges of brutality and intoxication. After abandoning his first wife and two children during the war, Grummond courted Frances without telling her of his past. He was not yet divorced when he and Frances wed.

The location of the corpses revealed Grummond’s cavalry was lured deep into the Indians’ trap, suggesting Fetterman may have doomed his infantry only in the vain hope of rescuing the others.

None of this information found its way into the women’s books. If Frances held a grudge against her dead, bigamous husband, she refrained from blackening his reputation, perhaps out of pity for their son.

More recent accounts, such as John H. Monnett’s Where a Hundred Soldiers Were Killed, bring to light the full record. In her 2008 book, Give Me Eighty Men, Shannon D. Smith theorizes that, following publication of Margaret’s book, none of Fetterman’s friends “broke the code of chivalry to refute the story of a well-bred and respected lady.”

The general who headed the presidential commission that investigated the tragedy found no reason to blame any of the men who had risked their lives at Fort Phil Kearny. Noting that 12 companies of soldiers were stationed at peaceful Fort Laramie, while only five companies watched over the besieged Fort Phil Kearny, Gen. John B. Sanborn wrote, “The difficulty, in a nutshell, was that [Carrington] was furnished no more troops or supplies for this state of war than had been provided and furnished him for a state of profound peace.”

Such a measured conclusion never stood a chance of taking hold in the popular imagination against the myth promoted by the women of Fort Phil Kearny. While Henry’s two wives succeeded in restoring his reputation for posterity, their efforts came at a cost to the martyred Fetterman.

Derek Catron is the managing editor of Florida’s Daytona Beach News-Journal and author of Trail Angel, set along the Bozeman Trail at the outset of Red Cloud’s War. Visit DerekCatron.com to read about the sequel, Angel Falls (Five Star Publishing, November 2017).