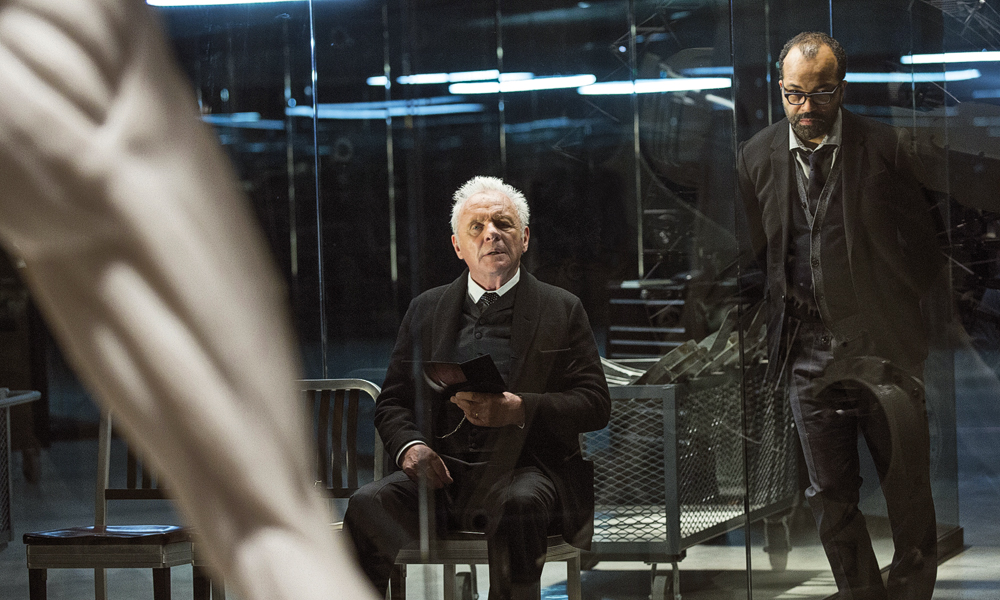 When, in 1973, MGM, once the titan of Hollywood studios, found itself on the ropes after a string of flops, a tiny film saved the studio from oblivion.

With $1.25 million to work with, novelist-turned first-time screenwriter and director Michael Crichton created a darkly humorous contemporary Sci-Fi Western, about a high-priced ($1,000 a day!) resort where wannabe cowboys could live out their fantasies—be heroes or villains, guns blazing! Best of all, because realistic, but remotely controlled robots populated the place, nobody could get hurt. That is, until one robot, played by Yul Brynner, in his The Magnificent Seven garb, got fed up with letting the tourists outdraw him. Other robots soon began malfunctioning in a deadly way.

Westworld, starring James Brolin and Dick Benjamin as businessmen who might have to die for their fantasies, was a smash with filmgoers, but especially with fans of Westerns, because the 1973 film created a completely plausible world that they were desperate to enter. The movie spawned a sequel, a short-lived CBS series and passionate fans.

But Jonathan Nolan, writer-director of the new HBO series Westworld, notes that the movie spawned much more: “The original film anticipates Terminator and video games and artificial intelligence—so many ideas packed into that film. I probably shouldn’t have watched when I was eight: Yul Brynner haunted my dreams for years to come. I loved it.”

While updated technologically, the new Westworld is a thrilling, often heartbreakingly beautiful continuation of the predecessor’s themes with, Jonathan explains, “An original set of stories within that world.”

You’ll be hooked from the moment the first group of “newcomers” (the paying visitors) is on the train, headed for Sweetwater, Wyoming, for their introductory meeting with their robot “hosts.”

Jonathan wrote the series with his wife, Lisa Joy. Both writers are in their element with the premise. He wrote the original story for the brilliant 2000 amnesia film Memento; she contributed scripts to 2007-09’s Pushing Daisies, about a man who can bring the dead to life for a single minute.

“It’s a synthetic Western,” Jonathan says. “What Lisa and I were drawn to was the juxtaposition between Science Fiction and the Western, and the values they have in common.”

Writing a successful adaptation is complex. “You need to understand and appreciate what was essential to the original property, but you have to be willing to be a bit of a heretic, and start anew,” Jonathan says. “There were two things that we were very excited about from the original film; one, the idea of the emerging artificial intelligence robots, there to service our id, who eventually bridle at that job. And two, the environment where you’re told that no one is keeping score, and you can behave as you want with no consequences.”

While all of the characters in the HBO series are new, one bears a striking familiarity—Ed Harris’s “Man in Black” in the remake has more than a passing resemblance to Brynner’s gunslinger character in the original.

“We wanted to turn the narrative inside out, and look at this world from the perspective of the robots. So if the original film is about hapless humans in a park where the robots have gone crazy, our series is about the hapless robot inhabitants of a world in which the guests have gone crazy. And Ed sort of symbolically takes on that role of the villain that Yul played in the film, but in this case it’s the guests who are the most villainous,” Jonathan says.

Along with the villainy, the remake offers one trope not found in the original film: romance. Evan Rachel Wood plays host Dolores Abernathy to James Marsden’s newcomer Teddy Flood. “The elusive love story; it’s a timeless tale that has always appealed to me,” Lisa says. “So much of a love story working [entails] first finding yourself. And that links deeply into Jonathan’s theme, the problem with memory, because the hosts’ memories are constantly being erased. So to pursue their dreams, they must first figure out which are their dreams and which are the dreams they’ve been programmed to have.”

One of the great additions to the longform story not found in the 1973 film is the character of the visionary behind the Westworld resort, Dr. Robert Ford, a name inspired by Jesse James’s killer, the Nolans admit. For that role, HBO cast a brilliant actor not primarily known for television—Oscar winner Anthony Hopkins.

“I think Tony, or Sir Anthony, like a lot of us, has been watching TV,” Jonathan says. “And I love the movies, but the work that’s being done in TV right now is a little more sophisticated, a little more cerebral and a little more gripping.”

The 10-episode first season began airing Sundays on HBO on October 2. How long will Westworld run? Jonathan says, “Lisa and I came with a game plan for where the seasons would go and how the story would end. But the beauty of television is the journey is as long as the audience wants it to be. The goal will be to keep telling the story as long as it’s vital and compelling.”