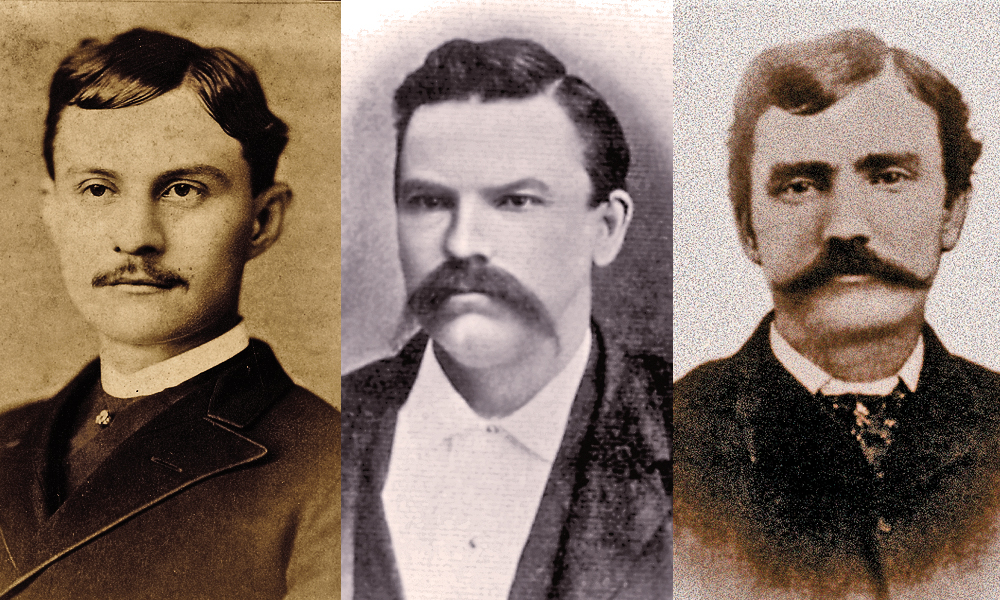 Fresh off the train from Austin, Texas, newly minted drinking pards Ben Thompson and John King Fisher, the acting sheriff for Uvalde County, take in the sights and sounds of San Antonio.

The dynamic drinking duo makes a first stop at Turner Hall Opera House, to take in a performance of Lady Audley’s Secret, starring Ada Gray. After the play, the two visit several saloons before a hack drops them off in front of the Vaudeville Theatre as 10 p.m. approaches. They stand outside visiting, for about a half hour before they enter the Vaudeville.

Both men stop at the bar for a drink as co-owner Billy Simms (or Sims) and special policeman Jacob Coy stroll over to greet them. The four proceed upstairs to watch the show. After they take their seats in the dress circle, Thompson calls for another drink and Fisher orders a cigar.

Thompson starts making rude comments about his killing of Jack Harris, an event now two years old. But the tension rises when saloon co-owner Joe Foster joins the group. Thompson calls Foster a thief and identifies him as the real target of his earlier shooting: “That is the son of a bitch I wanted to kill.”

To calm down his buddy, Fisher suggests everyone go downstairs to the bar, and all agree. Before he leaves his seat, Thompson offers to shake Foster’s hand, but the saloon proprietor refuses.

Thompson reacts by pulling a pistol and pistol whipping Foster about the mouth (one version has him putting the barrel in Foster’s mouth). Seeing this, Coy tries to grab the barrel of Thompson’s pistol as a shot rings out.

All hell breaks loose as everyone reaches for their hardware and a thunderous volley of shots (some say 20) rips through the theatre. Fisher and Thompson are fatally hit multiple times, and Foster takes a bullet in the leg. As blood and gore welter in the doorway and on the stairs leading to the street, friends help Foster, whose leg is bleeding badly, go down the stairs to safety.

This is the official San Antonio version of the fight. An autopsy, performed in Austin on Thompson, will hint at a darker version of events.

In 1884, Ben Thompson and John King Fisher are two of the deadliest gunfighters on the loose in Texas, with one caveat: John Wesley Hardin is in prison at this time. Both Thompson and Fisher have led charmed lives…until the two meet in Austin and travel together to San Antonio. Wearing a hat, sans crown, with a knife stuck in it, Thompson must have looked quite bizarre, but not half as macabre as he and Fisher look just outside the dress circle of the upstairs balcony at the Vaudeville Theatre—when death strikes them both.

Texas Time Line: What Goes Around, Comes Around

Ben Thompson and King Fisher share a charmed life, right up until the moment they meet.

Of the two shootists, the English-born Thompson gets the jump, having participated in three shooting scrapes by his 18th birthday. After a stint in the Confederate cavalry during the Civil War, Thompson is jailed, escapes, flees to Mexico and serves in Maximilian’s army, rising to the rank of major.

Back in the United States, Ben Thompson joins forces with Phil Coe and Tom Bowles in a saloon-gambling operation in Austin, Texas.

Both men begin their final arc by serving time in prison:

After a dust-up with his brother-in-law, Thompson begins serving two years of a four-year sentence in prison in Huntsville, Texas. He is released in 1870.

Sentenced to two years in a Huntsville prison for “housebreaking,” John King Fisher serves four months before he is given a pardon.

Texas Rangers capture Fisher and nine of his gang, but the prisoners are released due to lack of evidence.

Fisher has 15 indictments pending against him, but the “indictments” mysteriously turn up missing. Fisher makes bond in six of the cases, with help from the same seven ranchers.

In Colorado, Thompson enlists on the side of the Santa Fe Railway in its bloodless war with the Denver & Rio Grande, earning a $5,000 fee.

Back in Texas, Thompson is elected city marshal of Austin. Crime is reported at an all-time low, and he is re-elected to the post in 1881.

Fisher is found not guilty on charges of murdering two Mexicans, and, in May, he is acquitted or dismissed on all other charges brought against him. Fisher makes a vow that he will never again be charged with an offense.

While on a bender, Thompson fatally shoots Jack Harris, an owner of the Vaudeville Theatre in San Antonio. He is acquitted of the crime, but consequently resigns his post as city marshal.

Fisher travels by rail to the Texas capital to learn more about a new state statute that makes fence cutting a felony. There, he meets Thompson for the first time, and the two hit it off. When Fisher leaves town, to take the train back to Uvalde via San Antonio, Thompson decides to join him.

Did Thompson and Fisher meet in Austin by choice or by plan?

John King Fisher went to Austin, Texas, on business. While in the capital, he met up with the notorious Ben Thompson. Some writers have made the accusation that the two met by plan. Best Historical Guess: The two met by pure chance and had a lot in common—including hard drinking. What started out as a lark, ended in tragedy.

Did Fisher lure Thompson into a trap?

Since Fisher and Joe Foster were close friends, some have speculated that Fisher may have lured Thompson to the Vaudeville to be murdered. But if true, why would Fisher be so close to Thompson when the shooting began? Best Historical Guess: Fisher mistakenly thought he could patch up differences between Foster and Thompson—and underestimated Thompson’s ability to cause trouble. It cost him his life.

The coroner’s report stated that Thompson and Fisher were killed in a fight with Foster and Simms. But Thompson’s autopsy revealed that the shooters were above and to the left of the victims—not right in front of them. Best Historical Guess: Two eyewitnesses to the fight, Alex T. Raymond and John R. Sublett, claimed Simms and Foster approached Thompson and Fisher while they were still seated. Thompson extended his hand, but Foster refused to shake it. Fisher told Foster to shake hands with Thompson “like gentlemen.” When Foster refused a second time, Simms and Coy quickly stepped aside. Thompson and Fisher sprang from their seats as a fatal volley tore into them. Two of the fastest gunmen in the West never had a chance to pull their revolvers. Coy, with Thompson’s pistol, and Simms, with his own, then fired additional shots into the dying men. Foster tried to draw his weapon and shot himself in the leg. Thompson’s autopsy confirmed that a volley of bullets struck him.

Historian Tom Bicknell believes, “once Thompson insisted on speaking to Foster, he sealed his doom.” Bicknell also concludes, “Maybe if Ben hadn’t pushed for a meeting with Foster, he may have gotten out of the Vaudeville alive. The shooters must have been ready to react to a given signal, and I believe this would have been when Simms and Coy moved quickly out of the way. Joe Foster was careful to be out of the line of fire. I doubt any argument had time to develop.”

Quick on the Draw

Nitpickers and proponents of the “Fast Draw is a Myth” crowd take note.

“[Fisher’s] pistol was found belted around him, undischarged, and in his scabbard—a remarkable circumstance for one so quick in drawing and so self-possessed when in danger.”

News of the shooting spread fast. “Before the theatre was fairly cleared of its occupants, 1,500 people clamored at the closed doors of the building for admittance,” Galveston’s The Daily News reported. The next day, the San Antonio Express stated that 3,000 more gathered that morning “to get a sight at the bodies.”

The physician attending to Joe Foster felt save his leg was impossible, so he amputated the leg “a short distance above the knee.” Eleven days after the fight, on March 22, a doctor probing Foster’s wound hit an artery and Foster bled to death. Foster’s body was buried behind Jack Harris’s grave in the city cemetery.

Billy Thompson, who was in San Antonio the night of the shooting, claimed his brother Ben’s body to take home to Austin via train. An autopsy performed in Austin revealed that Thompson had been shot by eight bullets, five of them to the head. But the shocker was that some of the bullets removed from the body were Winchester rifle caliber. By the angle of trajectory, these bullets apparently had come from above and to the left, from the box seat area to the left of the dress circle. The evidence also suggested that the two victims were shot multiple times in the face after they were already down and helpless.

King Fisher’s body was shipped home to Uvalde, Texas, and buried. No autopsy was performed.