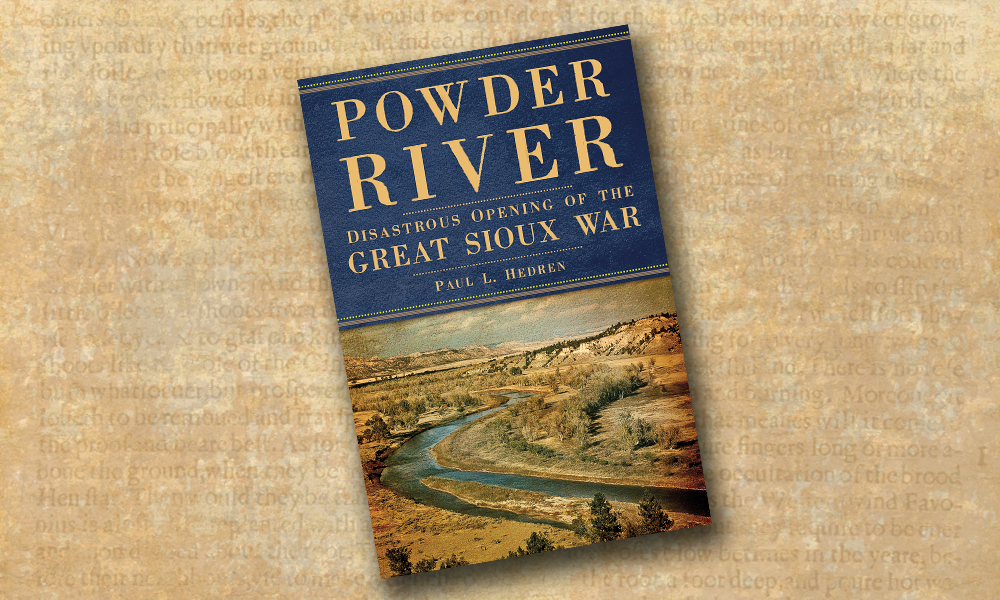 On March 17, 1876, U.S. Army Col. Joseph J. Reynolds led six cavalry companies on an early morning attack against a Northern Cheyenne village on the Powder River on the border of the Montana and Wyoming Territories. The attack ignited an 18-month war that changed the course of history for the United States and the Indian nations of the Northern Plains. For over 140 years, journalists, pundits and historians have analyzed the Great Sioux War that followed Reynolds’ controversial attack, but until this year, only one other major study—J.W. Vaughn’s 1961 The Reynolds Campaign on Powder River—has specifically focused on the battle and its consequences. Paul L. Hedren’s Powder River: Disastrous Opening of the Great Sioux War (University of Oklahoma Press, $34.95), the tenth volume on the Great Sioux Wars he has authored or edited in his prolific career, will now be

considered the definitive work on the subject. With twenty years of research, including new primary sources from the Northern Cheyenne tribe,  Hedren brilliantly resets the framework of Col. Reynolds’ attacks on the Northern Cheyenne villages and their influence on the short- and long-term consequences of the battle on the Great Sioux War, the Northern Plains tribes, the officer corps of the U.S. Army and the settlement of the northern tier of Western states and territories. As Hedren writes, “my hope is that readers…will gain refreshed and new insights on this first battle of this Indian war and the campaign (the Big Horn Expedition) of which it was a part.”

In late 1875, the United States economy was still reeling from the Panic of 1873. In the East, industrialization, unionization, unemployment, immigration and reconstruction dominated the headlines, while in the West, unprecedented change, conflict, settlement and construction on current and former Indian lands had the U.S. Army and citizens battling tribes in nearly every state and territory. President Ulysses S. Grant’s two-term administration was troubled from coast to coast with financial, social, political and economic unrest. Grant, who had considered running for an unprecedented third term, had retreated from that idea at the end of 1875, and, as commander in chief, turned his attention to something he knew well: war. The peace process was long in shambles as was Reconstruction, and Grant green-lighted a campaign against the Sioux and their tribal allies in November 1875.

The former general from Galena, Illinois, could not imagine that he and his Union officer colleagues, Philip Sheridan and George Crook, were about to set into motion the fates of history that would end the traditional way of life for the Northern Plains Indians, and bind the destinies of George Armstrong Custer, Crazy Horse, Sitting Bull and a river valley called Little Big Horn to be etched infamously into the annals of history. As Hedren writes in his preface, “Custer was to be a part of that plan: he and Crook were two of the army’s illustrious field marshals. Failure was simply unimagined. It seems to [Hedren] that one cannot tell the story of the Big Horn Expedition and its Powder River battle without fully understanding the rosy-tinted context in which Crook and fellow officers presumed and planned.

The strength of Hedren’s Powder River is his impeccable research, voluminous endnotes, detailed appendices and inclusive bibliography that will remain a resource for students, researchers and historians for decades. His pursuit of new primary source material from the Lakotas and Northern Cheyennes—especially about the little-known Cheyenne patriarch Chief Old Bear—led to newly discovered material in the National Archives, Adjutant General’s Office and the Judge Advocate General’s review files on the post-Battle of Powder River court martials of Henry E. Noyes, Alexander Moore and Joseph J. Reynolds. Meticulously written in a poignant and thought-provoking style, Hedren’s experience as a leader in the National Park’s service is brought to bear in his conclusions and summations on the conflict, leaving the reader seeking to consider the ongoing importance of the 19th century war to our 21st-century nation, and a guiding, encouraging voice in support of preserving and protecting the Powder River battlefield for today and tomorrow.