Hand Over the Ice Cream 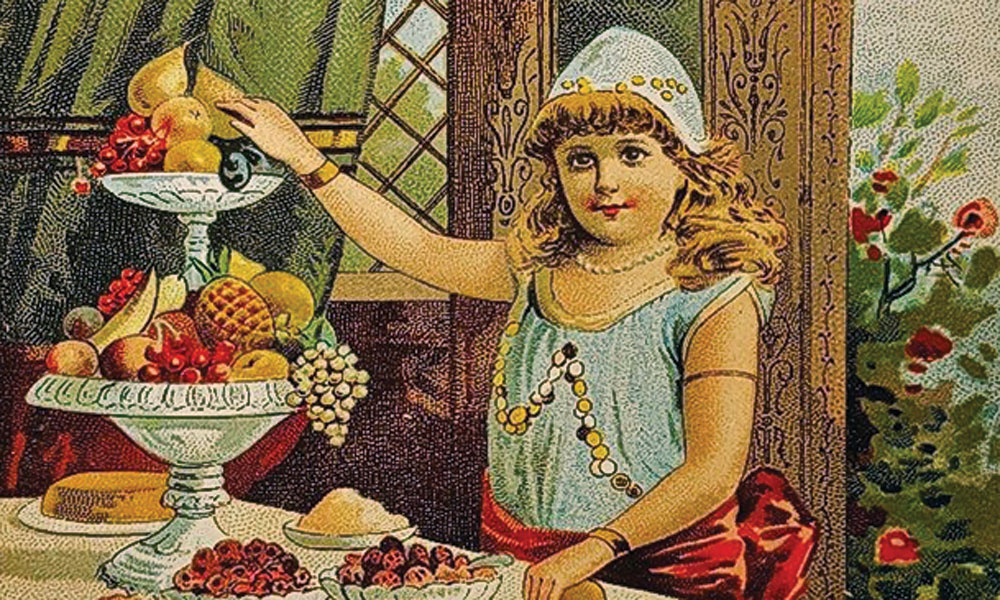 In 1850, a new ice cream saloon in San Francisco, California, greeted patrons with the aromas of vanilla and lemon.

The Alta California described the shop as: “A polished and luxurious retreat from the dusty streets and din of business, where perfect order and comfort prevails, and where the icy sweets are dispensed by fair hands, and come home to the most exquisite tastes….”

All over the frontier West, folks enjoyed ice cream served to them by street peddlers, at stand-alone parlors or saloons, and in bakeries, candy shops, coffee houses and restaurants.

Flavors included tastes we know and love to this day, such as vanilla, chocolate, strawberry and lemon. Sometimes other odors mixed in with these sweet scents; patrons got an interesting whiff when they entered the ice cream and oyster tent that Sacramento businesswoman Mrs. Josephine opened in 1851.

A “modest” vendor in St. Louis, Missouri, Carlile Michelmore, announced in May 1851 that his “Fountain of the Roses” was open for the season. He advertised, “…I invite my old friends and the community at large to give me a call, and try my Ice Cream and Soda-Water; which I flatter myself, cannot be equalled in the city.”

Even fried ice cream, which some may consider a 21st-century novelty, was a trend in 1894. “It sounds queer, but it tastes very good,” read a newspaper headline in Parsons, Kansas.

“A small, solid cake of the cream is enveloped in a thin sheet of pie crust and then dipped in boiling lard or butter long enough to cook the outside to a crisp. Served immediately, the ice cream is found to be as solidly frozen as when it was first prepared,” the city’s paper, The Parsons Weekly Blade, reported on July 7, 1894.

The paper informed readers that the wife of Alexander Hamilton, the first U.S. Treasury secretary, introduced this “toothsome” dish of baked ice cream with a meringue top at the nation’s capital.

Another surprise is how folks ate ice cream. People today generally eat ice cream in bowls, but during the 19th century, patrons ate ice cream off plates or saucers. Bowls did not become popular as an ice cream serving dish until the 1900s.

In 1887, a Kansas City, Missouri, couple was so desperate to get married, that the husband-to-be, George Shumaker, scoured the city for Judge Henry P. White, locating him at the Turner Hall beer garden. When Shumaker and his bride-to-be, Emma  Holden, reached the hall, they found the garden too full of people. Seeking a more private venue, they strolled across the street to Hunter’s Ice Cream Saloon.

When they entered the saloon, the sweet smells of vanilla, chocolate, pineapple, lemon and banana enveloped them. Mr. Hunter saw an opportunity to sell lots of ice cream to the wedding party, so he agreed to host the ceremony. After the couple was married, the guests took seats in the parlor, and the waiters rushed in to take their ice cream orders.

When a waiter asked the new Mrs. Shumaker what she would like to order, she declared, “Let’s go over and get some beer in the garden, dear George. It will be nicer and cheaper.”

Proprietor Hunter shouted with rage: “That’s the last wedding that will take place here. If that girl wasn’t married she would sit down here and eat a dozen plates of ice cream and never murmur.”

You will probably eat at least a dozen plates (or bowls) of the lemon ice cream from the 1882 recipe enjoyed by Dakota Territory pioneers.

Mix all ingredients in a large bowl and stir to combine until sugar is dissolved. Freeze according to ice cream machine instructions. Makes one quart.