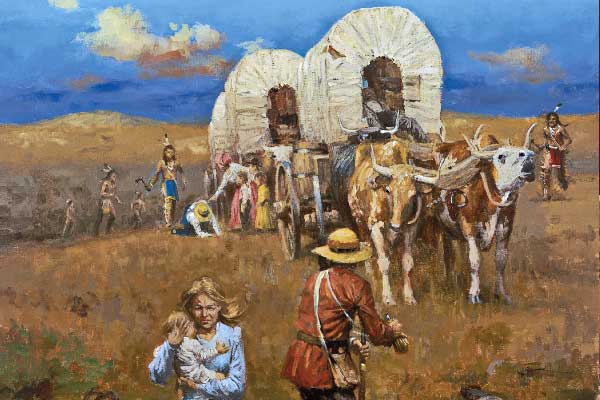 In 1860, the last wagon company leaving Fort Hall for Oregon was led by Capt. Elijah Utter. The Utter Party of 44 souls included seven members of the Van Ornum family from Wisconsin.

The previous wagon train, through, had claimed to be the final group leaving Fort Hall that year. This mix-up left the Utter Party traveling through dangerous territory without a military escort.

On September 9, the emigrants were west of Castle Butte near the Snake River in Oregon when roughly 200 Bannock and Shoshone warriors confronted them. The wagons drew into a circle as the Indians tried to run off the emigrants’ horses.

The distraught Utter Party offered food and other items to avoid conflict. Hoping they had purchased their safety, the pioneers continued on the trail.

They were attacked. Eight-year-old Reuben Van Ornum and his sisters, among other children, watched helplessly as the carnage swirled about.

Lacking water and seeing the Indians reinforced, the emigrants concocted a desperate plan. They would abandon half the wagons and livestock, and make a run with the rest.

On the evening of September 10, the plan unraveled as the volunteers tasked with covering the escape fled. The panicked emigrants abandoned all the wagons. Many were killed, but more than half, including Reuben and his family, escaped into the dark. The fugitives suffered weeks of living hell. Struggling to find food, they ate pets and even cannibalized the dead to survive.

The remaining members of the wagon party staggered to a camp along the Owyhee River. While they fished, friendlier Shoshone visited and traded with them. Fearing these Shoshones, a small group, including the Van Ornum family, fled on or about October 16, not knowing that rescue was merely days away.

Marcus Reno and his troops found the mutilated bodies of Alexis Van Ornum, Abigail and their 16-year-old son, Mark, as well as three members of other families. The dragoons rescued a dozen nearly naked, starving survivors of the Owyhee camp. Four Van Ornum children (Eliza, Minerva, Lucinda and Reuben) were missing and assumed captured.

Learning of the missing children, their Uncle Zacheas ramrodded a search.  Zacheas was present when Reuben, at the age of 10, was rescued from the Shoshones by Maj. Edward McGarry in November 1862.

The fates of Reuben’s sisters was unknown. Emigrants claimed to see Minerva and Eliza being led around on collars, and Lucinda was rumored killed during an escape attempt.  Reuben believed his sisters dead of starvation.

Reuben had survived siege, the flight, the murder of his family and two years of captivity. Within months of his rescue, the boy wandered off to an unknown fate, perhaps to rejoin the Indians.

Zacheas scouted for Patrick Connor’s troops and was present at the Bear River Massacre in November 1863. The military assaulted a village of Shoshones and Bannocks, in part because of a rumor that the encampment had sheltered those who massacred the Utter Party. They hoped that surviving children might be present. They weren’t.

Survival Tip: How to Survive an Abduction

Reuben Van Ornum was a child when he was captured, with neither knowledge of his environment nor hope for an escape. The techniques he utilized are still smart tactics for hostages in a similar situation, although may not work in all cases. As a 10 year old, Reuben was not seen as threatening. The more he went about his life as a child, the more his Shoshone captors viewed him as similar to their own children. Polite and a good listener, he became a useful member of the society. Reuben was likely adopted by a family. The more Reuben blended in, the better his prospect of surviving his captivity. In fact, Reuben so readily adopted to the ways of his captors that, after his rescue, he waited for an escape opportunity and possibly returned to his Indian family.

History in Art
By Illustrator Andy Thomas
I painted the moment at dusk when the emigrants have to abandon the truncated wagon train and run near the river to escape the Indian attack. One of the running children is Reuben Van Ornum, the subject of survival. The cluster of figures at the second wagon is the wounded wagon company captain, Elijah Utter, with his wife, Abagel, and three of their children. They are about to be killed by an approaching Indian.