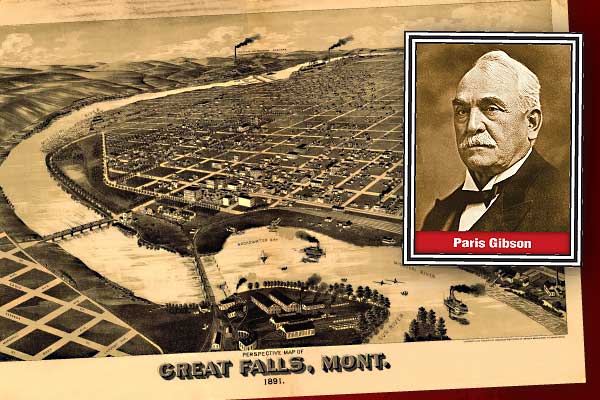 Most Old West towns grew up helter-skelter around mines or along cattle trails. But Great Falls, named for a spectacular series of waterfalls clustered along a short stretch of the Missouri River in central Montana, was different.

“The beautiful thing about Great Falls is that it was established with a thought for the future,” says Megan Trent, the archives administrator for the town’s history museum. William J. Furdell, who wrote a popular history of the town, proudly described it as a “businessman’s town” that “couldn’t point to a boot hill or a hangin’ tree.”

Although Indians had lived in the region for millennia, the area was a giant blank space on American maps until Meriwether Lewis and William Clark and their Corps of Discovery passed through in the summer of 1805, taking nearly a month to portage around the falls.

Paris Gibson, a sheep rancher who’d moved to Montana in 1879, visited the waterfalls in 1880 after reading a description in Lewis’s journals. Impressed by the industrial potential of the region and with the financial support of railroad magnate James J. Hill, Gibson platted a town in 1883. Guided by his philosophy that “…capitalists, professionals, wage earners, and merchants ought to be united by a common bond of building a beautiful city,” Gibson laid out straight, tree-lined streets, with nearly 900 acres designated as park land.

The community, incorporated in 1889, grew quickly. There were railroads and banks, smelters and flour mills. Later, with the ready availability of hydroelectric power, came a light company and trolley system. Today’s Great Falls, with over 50 parks and more than 40 miles of urban trails, is a testament to Gibson’s ideals.

Thanks to its longstanding commitment to historical conservation, Great Falls was named a Preserve America community in 2006. “It kind of blows my mind how many museums and historical societies and preservation groups there are in town, all working to preserve our past,” says Trent.

Get an overview of the town aboard the Great Falls Historic Trolley, or take a stroll along the River’s Edge Trail. The town’s Railroad Historic District was listed in the National Register of Historic Places in 1993. Be sure to check out the Vinegar Jones Cabin, built in 1884.

Learn more about America’s greatest expedition at the Lewis and Clark National Historic Trail Interpretive Center, where you’ll also find exhibits on some of the Plains and Northwest Indians encountered by the Corps of Discovery.

The History Museum (formerly known as the High Plains Heritage Center) is housed in the International Harvester Building, built in 1929. One of the highlights, says Trent, is an exhibit on the Anaconda Copper Mining Company’s “Big Stack.” When completed in 1908, the 508-foot-high smokestack was the tallest in the world. It was demolished in 1982.

Another don’t-miss attraction is the C.M. Russell Museum Complex, named for the premier Western artist Charles Marion Russell. Originally from Missouri, Russell moved to Great Falls in the 1890s and lived there until his death in 1926. In addition to hundreds of artworks by Russell and other Western artists, the museum complex holds the Browning Firearms Collection and an exhibit on Northern Plains Indians.

For an entirely different kind of museum experience, drop by the Montana Cowboys’ Association Museum and Bar. “It’s a cowboy museum in the back of a bar,” explains Trent, “but it’s quite a nice bar.”