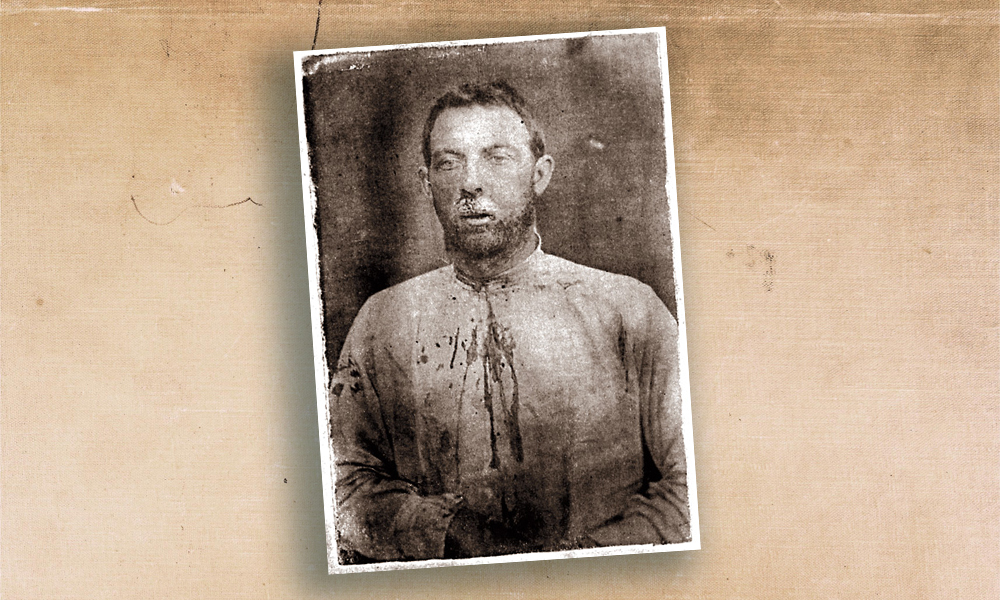 Late in the day on September 21, 1876, hordes of newspaper reporters converged on the little burg of Madelia, Minnesota – three of the Northfield bank robbers had been captured alive after two weeks on the run.  The robbers admitted that they were the Younger brothers, part of the notorious James-Younger gang, but they were cagey in their interviews with the newsmen.  They would not name their cohorts in the botched robbery, nor would they identify the two men who were reported to have escaped to Missouri, except to strongly deny that they were brothers Frank and Jesse James.  The Youngers also refused to identify the robber who killed the First National Bank’s acting cashier.

Bob Younger did explain why they had come to Minnesota (“for pleasure”), why they had decided to rob a bank there (“to pay expenses”), and why they had settled on Northfield (“one of the boys had a spite against” Radical Republican Adelbert Ames, an investor in the bank).  But the brothers were evasive about where they had been and exactly what they had done in Minnesota prior to the robbery.  Even after they were incarcerated for life in Stillwater Penitentiary, they declined to elaborate on the Minnesota venture.  However, they never failed to refute their participation in previous holdups, and they remained steadfast in denying that the James brothers had journeyed with them to Northfield.

Then, in June of 1889, an unnamed reporter for the Cincinnati Enquirer visited Stillwater and spent several hours interviewing brothers Cole and Jim.  Cole was especially forthcoming, perhaps because his brother Bob was dying of tuberculosis and a favorable interview might build sentiment for the pardon several interested parties were trying to get him.  The lucky reporter ended up with what must have been the biggest scoop of his career, for contained within the article’s three long columns in the June 30 issue of the Enquirer was the story of the Northfield Raid – as told by Cole himself.  Never before had he given such a detailed accounting.

And somehow, even though the Enquirer’s piece was picked up by a few other papers, that account has remained unknown to scholars and buffs for the last 126 years.  Cole’s interview is provided here not as it appeared in the Enquirer (the scan is difficult to read) but as it was copied in the Butler Weekly Times (Butler, Missouri) of July 10, 1889.  Bear in mind that Cole remains as cagey as ever.  Outside of Northfield,” Cole asserts, “no man can charge me with a single crime.”  And, he claims, the two bandits who famously got away are now dead; Frank James was not in Minnesota because he was then in California running a ranch.

But while Cole’s account must be read with a dose of skepticism, there remain significant revelations, some of which support what we know or previously suspected about the gang’s thinking and activities.  Other details, if true, force us to reconsider the commonly accepted “facts” of the Northfield Raid.  Highlights to look for include:

1.  The gang went to Minnesota for “pleasure, the trip being merely for a few weeks.”  This is in agreement with Bob Younger’s statement to the Minneapolis Tribune shortly after their capture.  Additionally, the gang traveled to Minnesota by rail.  Cole was pretty consistent in subsequent interviews in giving their mode of transportation as the railroad.  He says this in his 1903 autobiography.  We also have several documented reports of gang members purchasing horses in Minnesota.   Yet numerous authors and filmmakers have insisted on having the boys ride horseback to Minnesota.

2.  They were flush with cash, Cole says from $500 to $600 per man.  Just a few weeks earlier, the gang had robbed a Missouri Pacific train of approximately $10,000 in cash near Otterville, Missouri.  This bold train robbery was actually another strong incentive to leave Missouri temporarily, especially as one of the gang had later been captured, providing identifications and other useful information about his accomplices.

3.  They decided to rob a bank while in Minnesota because they became “comparatively broke” from gambling and drinking.  Again, Bob Younger told the Tribune the same thing, that it was to “pay expenses.”  It is well documented that some gang members visited the St. Paul gambling house of Chinn and Morgan.

4.  They did not decide on the First National Bank until after arriving in Minnesota.  In fact, Cole says they “looked around at some of the adjacent towns and finally the choice fell on Northfield.”  This, too, is in agreement with Bob Younger’s statement to the Tribune and sightings of gang members casing the banks in Mankato.

For Cole’s 1903 autobiography, he composed an entirely different tune.  He claimed that Adelbert Ames and his father-in-law, former Union general Benjamin Butler, whom they learned had “a lot of money invested” in the First National Bank, was their primary reason for making the Minnesota trip.  Cole even title’s that chapter in his book “Ben Butler’s Money,” although Butler was not one of the bank’s investors.  Providing this motive for the Minnesota venture was a calculated effort by Cole to put him and his cohorts in a more sympathetic light: they were still fighting the Civil War, as opposed to committing bloody robbery simply because they had frittered away their cash gambling and drinking.

5.  Here is by far the most intriguing revelation from the Enquirer interviews: Jim Younger did not leave with the gang from Missouri but bumped into them accidentally on the train in Council Bluffs, Iowa.  One might be inclined to dismiss this as another of Cole’s fabrications but for the fact that Jim Younger said the same thing in a separate interview with the journalist.  The Jim Younger interview is not included in the Butler Weekly Times printing, so here is what he said: “My being at Northfield was a matter of chance.  I had been out in California with my uncle.  While returning home and walking through the sleeping-car at Council Bluffs, I felt some one kick me on the ankle.  Turning around, I recognized my brother Cole and his friends.  They were bound for the Northern lakes, and it took very little urging to induce me to go with them.  It has cost me any amount of suffering and thirteen years imprisonment so far.”

Although the reporter did see Bob, the youngest sibling was apparently too ill to say much.  It is important to note, however, that Cole, the oldest of the brothers, was the only one who would talk about the Northfield Raid.  “When Northfield was mentioned,” wrote the newsman, “Jim, like Bob, referred the questioner to Cole, the spokesman of the brothers.”