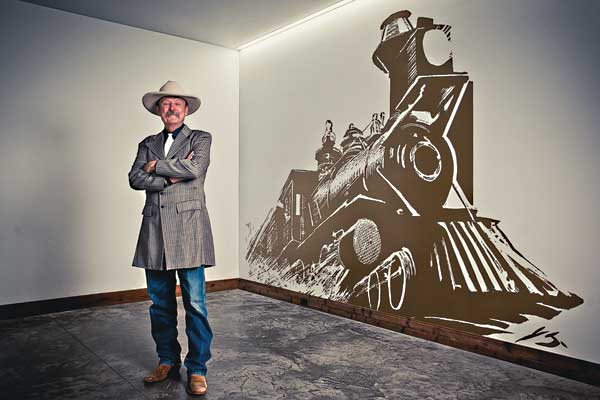 Scottsdale’s Museum of the West has been a long time coming.

Our friend Abe Hays has been championing the idea of a Western museum in the Arizona town for at least 30 years. Most of us in the history biz gave up any chance of it happening about 10 years ago. Hays never gave up on his dream.

This January, the museum opened! True West teamed up with the dynamic director, Michael Fox, to help with the effort. Fox talked us into donating our massive library (we have been collecting books since the founding of the magazine in 1953). We are proud to announce the True West Library is open to the public in the Ridenour Room.

In addition, Jana Bommersbach (our Old West Saviors columnist) and I provided the voices for the upstairs narrative displays.

Fox and his crew also featured  close to 100 of my True West Moments, first published in The Arizona Republic, in the Abe Hays Collection gallery. On opening night, I was stunned when I saw one of my scratchboards of a speeding locomotive on an entire wall. Do I look proud? Oh, I think you know the answer to that one.

Next, head over to Cody, Wyoming, where we take our hats off to the Buffalo Bill Center of the West, our number one history museum of the year.

Now get on the road and check out all the fine Western history and art museums featured in this special issue.