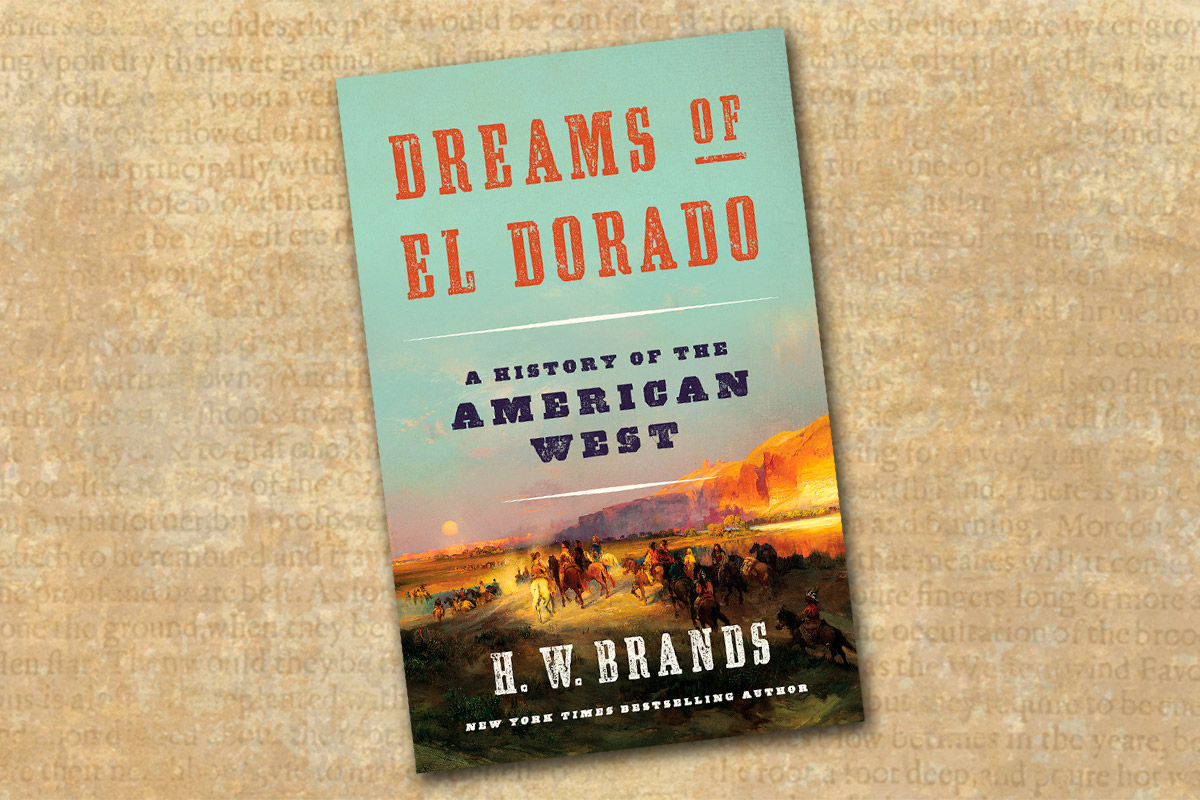 American historian and biographer Henry William “H.W.” Brands Jr. has been a prolific and consistent chronicler of U.S. history since his first book, Cold Warriors: Eisenhower’s Generation and American Foreign Policy, was published in 1988. Brands’ 30th history book, Dreams of El Dorado: A History of the American West (Basic Books, $32), is a fast-paced, highly readable narrative of the West from the time of the Louisiana Purchase in 1803 to the beginning of the modern West in 1913. Brands, who is also widely published on U.S. foreign policy, economics, presidents and leadership, regularly returns to his native region in his biographies and syntheses. In Dreams of El Dorado, he organized his sections and chapters chronologically and topically to thread together events from President Thomas Jefferson’s dreams of Western expansion to President Theodore Roosevelt’s progressive policies of Western conservation.

The reader will soon recognize the well-known topics—Western expansion and exploration, the Oregon Trail, Texas independence, the Gold Rush, the Transcontinental Railroad construction, the rise of the cowboy and cattle culture and the passing of the West’s frontier culture into the modern era. Woven into the larger ideas and topics are violent, jarring clashes of cultures and the Army-Indian wars along with the poignant stories of risk-taking, leadership and sacrifice required to settle the vast Western United States. As Brands writes in his introduction, “The West was where fortune beckoned, where riches would reward the miner’s persistence, the cattleman’s courage, the railroad man’s enterprise, the bonanza farmer’s audacity; but El Dorado was at least as elusive in the West as it ever was in the East.”

Written in a popular narrative history style similar to the styles of his highly readable peers Paul Andrew Hutton, T.J. Stiles and John Boessenecker, Dreams of El Dorado is a strong contender as a textbook for undergraduate or graduate courses on the 19th century West, supplanting Richard White’s “It’s Your Misfortune and None of My Own”: A New History of the American West (University of Oklahoma, 1993) and Robert V. Hine, John Mac Faragher and Jon T. Coleman’s The American West: A New Interpretive History (Yale University, 2017). For the general reader seeking a fresh interpretation or deeper understanding of the region, Brands’ Dreams of El Dorado should inspire the reading of his earlier works, including Lone Star Nation: The Epic Story of the Battle for Texas Independence (Doubleday, 2004), The Age of Gold: The California Gold Rush and the New American Dream (Anchor, 2003), The Reckless Decade: America in the 1890s (University of Chicago, 2002) and T.R.: The Last Romantic (Basic Books, 1998).

Brands, the Jack S. Blanton Sr. Chair in History at the University of Texas, is a native Oregonian and his section and chapters on the settlement and development of the Northwest, including the trapper and fur trade era through the lens of Joe Meeks, are especially outstanding. I believe from the strength of his research and passion for the topics, it could be possible to see a biography on Meeks or a history of the Oregon Territory from Brands in the future.

New York Times best-selling author Sandra Dallas’s newest novel, Westering Women (St. Martin’s Press, $26.99), is engrossing and thoughtful, inspiring and touching. It is a tale of more than two dozen eligible bachelorettes bound for California in hopes of making a better life for themselves and finding a husband with whom they can share the experience. The main character is a seamstress with a daughter and a heartbreaking secret she wants desperately to leave behind.  If she can meet a man who can look beyond the painful truth, she and her little girl might have a chance at a promising future. Readers will become so invested in the unvarnished struggle and the hardship, they’ll gain a new understanding of this chapter in America’s history.

—Chris Enss, author of No Place for a Woman: The Struggle for Suffrage in the Wild West

Spotted Tail (Sinte Gleska) was the most prominent Brule (Sicangu) Lakota during the late 19th century. In Spotted Tail: Warrior and Statesman (South Dakota Historical Society Press, $29.95), Professor Richmond Clow provides a scholarly look at Spotted Tail’s life. Born near the White River in today’s South Dakota, possibly in 1823, Spotted Tail grew in the traditions of the Lakota and became a noted warrior. The Brule chose Spotted Tail as their spokesman, and he was later recognized as their leader. Spotted Tail realized for his people not only to survive, but flourish, they needed to cooperate with the whites and learn their ways. He believed Brule children needed to learn English, math and mechanical skills. He established Brule cattle herds and promoted the hiring of Brule teamsters to haul goods, creating employment for his people. Every serious student of Lakota history should read Spotted Tail.

At the onset of the Mexican War in 1846, James L. Freaner, a printer for the New Orleans Daily Delta, enlisted. He fought at Monterrey, accompanied the U.S. invasion of Vera Cruz and followed the army into Mexico City. Along the way, Freaner evolved into one of the nation’s first war correspondents, writing for the Delta, often from the front lines.  His express couriers sometimes carried his dispatches more swiftly than the Army. From the Halls of the Montezumas: Mexican War Dispatches from James L. Freaner, Writing Under the Pen Name “Mustang” (University of North Texas Press, $39.95), edited by Alan D. Gaff and Donald H. Gaff, presents a complete compilation of Freaner’s war correspondences. The editors’ exhaustively researched footnotes paint a broader backdrop for the events. This volume is a must for readers who want to understand this controversial conflict in history.

—Mike Blakely, author of A Sinister Splendor, A Novel of the Mexican War

Wilkie, or officially Wilhelmina Van Slyke, learns the tricks of the yeggman’s trade of picking locks from “Uncle” Jameson in C.K. Crigger’s The Yeggman’s Apprentice (Wolfpack Publishing, $10.99). They team up to stop a law firm full of embezzlers in 1905 Butte, Montana, but immediately run into trouble. Jameson dies leaving Wilkie to fend for herself. A young woman with an intrepid attitude, Wilkie soldiers on and meets wanted-man Hix Forry and his motorcycle. Hix, who was simply asked to give Wilkie a ride, finds himself embroiled in this cat-and-mouse chase. And chase it is. This breathtaking story meshes horses with machines, where a horse trumps a motorcycle. It’s a fly-by-the-seat-of-your-pants caper, one readers can’t put down, with nonstop action and intrigue from page one on.