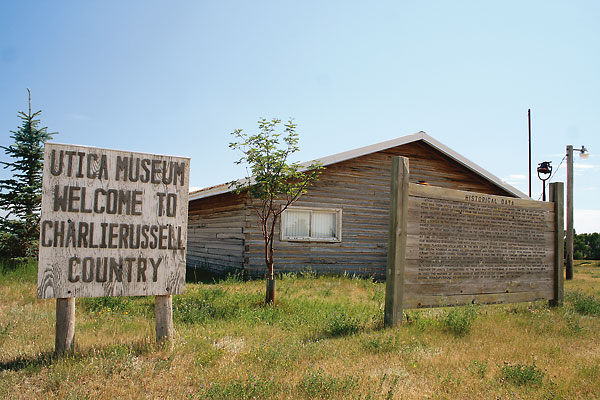 It’s a quiet day in Utica. No practical joker has tied tin cans to a dog’s tail and sent that dog running across the street in front of the General Merchandise, spooking one cowboy’s horse and a flock of chickens.

From the looks of things, Utica, Montana, is always quiet—even during the “What the Hay” hay bale decorating contest the town holds the first Sunday after Labor Day.

Hay baling? What would the cowboys working the Judith River in the 1880s say to that?

In 1907, Charlie Russell painted an oil-on-canvas, Quiet Day in Utica (Charlie called it Tin Canning a Dog), for Charles Lehman, who owned the store. Among those witnessing the scene in the painting are Lehman; Milly Ringgold, a black man prospecting down the road in Yogo; and Charlie himself, leaning on a hitching rail, smoking a cigarette.

No doubt about it, Charlie was authentic, and today Utica is as weathered and as original—and, yep, authentic—as a C.M. Russell work of art.

I find myself in the center of Russell Country, but, criminy, all of Montana is really Russell Country. He left his mark across the state. In Helena, where his majestic painting Lewis and Clark Meeting Indians at Ross’ Hole hangs behind the Speaker of the House of Representative’s rostrum in the state Capitol. In Billings, where Rand Custom Hats offers the “Charles M. Russell” hat, complete with a skull hat pin or pen-and-ink illustration on the crown. At Glacier National Park, where Charlie drew the pictographs resting on Lake McDonald Lodge’s giant stone fireplace. Yet the state tourism department designates north central Montana as Russell Country: Choteau (which is really A.B. Guthrie Jr. Country), Harve, Shelby, Chinook, Fort Belknap, Fort Benton, Conrad, Winnett, Shawmut, White Sulphur Springs and many other towns and crossroads. Charlie has a National Wildlife Refuge named after him on the Missouri River, and a high school named after him in Great Falls. The Charlie Russell Chew-Choo (sounds more like chewing tobacco) is a 3.5-hour, train-ride dinner adventure out of Lewistown that crosses much of Charlie’s stamping grounds in the Judith Basin.

For this Renegade Road, I’m traveling the C.M. Russell Auto Tour. The state legislature has designated the roughly 100 miles of Highway 87 between Lewistown and Great Falls the “Charles M. Russell Trail,” with a “Memorial Way” loop out of Windham or Hobson that takes travelers to Utica, along the Judith River, to Old Yogo Town and Russell Point.

A couple of warnings: The trail designates 25 stops, but interpretive signage is rare, practically nil (pick up a booklet in Lewistown or Great Falls, or call 800-527-5348 for one). Trailers and large RVs are not recommended along the Memorial Way loop, which follows single-lane, narrow, gravel roads through remote country into Lewis & Clark National Forest.

Much of the country hasn’t changed since Charlie was cowboying and painting, and that makes this journey especially worthwhile.

Charles Marion Russell was born a city slicker on March 19, 1864, in St. Louis, Missouri, but his family moved to the Oak Hill area outside of the city when he was five. As a child, he spent much of his time sculpting, drawing and riding his pony named Gyp. He showed no interest in school—not even art school—or the family business, so when Charlie was 16, they sent him to Montana Territory to work on Pike Miller’s sheep ranch.

Charlie got along with sheep about as well as he got along with school. Miller fired him, so Charlie gathered his belongings and met up with a grizzled character named Jake Hoover, who took Charlie under his wing and led him to Pig Eye Basin.

The Jake Hoover days are chronicled by paintings such as A Doubtful Guest and When I Was a Kid, set in Lewis & Clark National Forest, along the winding, rough, narrow Park Road 487 near Indian Hill and Hay Canyon campgrounds. “Nature had surely done her best,” Charlie wrote, “and no king of the old time could have claimed a more beautiful or bountiful domain.”

Eventually, Charlie turned to cowboying, starting out herding horses as the “nighthawk.”

Named after Utica, New York, Montana’s version, founded in 1880, was a wild and woolly cowtown that boasted four saloons. Jim Shelton’s saloon served as Charlie’s first studio. Using house paint, Charlie created a large painting, Cowboy Camp During the Roundup, to hang over Shelton’s bar. Near here, after the disastrous winter of 1886-87, Charlie created a postcard-size watercolor, Waiting for a Chinook, that marks the end of the open range era.

That winter killed 60 percent of Montana’s cattle, wiping out some ranchers, and sickened all of the cattle. Russell’s friend, cowboy E.C. “Teddy Blue” Abbott called it “Hell without the heat.” It became known as the “Hard Winter and the Big Die-Up,” but Charlie’s watercolor probably summed it up best.

Rancher Louis Kaufman, living in Helena, had asked about the condition of his OH Ranch herd. In response, Charlie painted Waiting for a Chinook. “Hell,” rancher Jesse Phelps said when he saw Charlie’s sketch of an emaciated steer standing in snow while hungry coyotes wait for his impending death, “he don’t need a letter; this will be enough.”

It was enough to send Phelps, when he saw Charlie’s artwork, to the nearest Helena bar to get drunk.

Most of Charlie’s paintings are less grim, of course, freezing action in mid-frame, letting admirers catch what life was really like in Old Montana. Near Hobson, Charlie found the inspiration for The Toll Collectors and Paying the Fiddler.

The Charles M. Russell Trail isn’t just scenery and settings, paintings and sagebrush. Many museums along the trail are worth visiting. The Central Montana Historical Museum offers a pleasant display of area history, while the Lewistown Art Center offers not only exhibits, but also youth and adult art workshops, and sponsors the annual Montana Cowboy Poetry Gathering at the Yogo Inn. Homesteading, ranching and, naturally, Russell are covered at the Utica Museum, while the Belt Museum, located in Belt’s 1895 jail, documents the area’s mining history.

Don’t bypass Stanford, either. Then known as Antelope Butte Springs, Stanford was the setting for one of Charlie’s most popular images.

In Without Knocking features a group of celebrating cowboys riding their horses into the Hoffman Bar. Founded in 1882 west of the current town, Stanford is a little livelier than Utica. Charlie gets his due at the Judith Basin County Museum, while the Prairie Past Museum features a large collection of antique agricultural machinery. Stanford’s most celebrated resident, however, is at the Basin Trading Post, where the (stuffed) white wolf, six feet long and more than 80 pounds, stands snarling. The wolf was killed in 1930. Charlie was no stranger to wolves, depicting these animals in sculpture and paint.

Of course, no Russell tour is complete without a tour of Great Falls. Charlie is honored by statues and more in his hometown.

By 1893, Charlie had quit cowboying and worked as a full-time artist. He split his time between Cascade and Great Falls for a while, and married Nancy Cooper in Cascade on September 9, 1896. In 1900, the Russells built an $800, two-story home on Fourth Avenue North in Great Falls. Three years later, Nancy had a studio built for her increasingly popular artist husband. Charlie’s first real studio was perfect for the artist; made of telephone poles, the log cabin was filled with Charlie’s Western accouterments. The artist lovingly dubbed it the “shack.”

Oh, when Charlie was commissioned in 1911 to do the 12-by-25-foot Lewis and Clark Meeting Indians at Ross’ Hole for the state Capitol, he had to enlarge the studio’s ceiling.

Charlie’s home and studio are now part of the C.M. Russell Museum. Opened in 1953 as the C.M. Russell Gallery, the museum is much more than an art exhibition. Five galleries highlight Charlie’s art and life, but the museum also houses the Browning Firearms Collection, the works of contemporary artists and the Frederic G. Renner research library dedicated to Charlie, Western art, Western artists and Western and Montana history.

Children will have a blast at Russell’s West Discovery Gallery, and no one should miss “The Bison: American Icon, Heart of Plains Indian Culture,” a permanent exhibition that opened in December. Showcasing more than 1,000 objects— from Plains Indian artifacts to plenty of artwork—the gallery studies the role of the “buffalo” from the 1800s to the present, its importance among the Indians and its rise to American icon. You can even find yourself caught in the middle of a stampede of thundering bison, and not even get dusty.

Charlie Russell died in his upstairs bedroom of a heart attack on October 24, 1926. He was 62. Yet he has never really died. We see him across Great Falls, across Montana, across the West, throughout the world. We see him in the thousands of drawings and paintings he created, in the 46 bronze sculptures and in his other creations from clay and wax. We see him in the letters he illustrated, and we hear him in his stories. We see him in the sculptures created in his likeness, including the one at the National Statuary Hall in Washington, D.C. We see him in that weathered, 21st-century cowboy still working the ranges Charlie once worked himself.

Will Rogers put it best. “He left us, Nancy,” he wrote to Charlie’s widow, “but he left us much.”