An Awful Time for Children 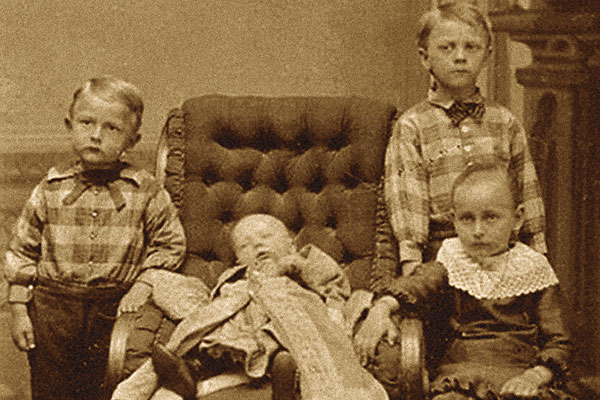 “My poor boy….God has called him home….It is hard, hard to have him die!”

President Abraham Lincoln spoke these words shortly after he lost his 11-year-old son, William Wallace Lincoln. “Willie” died after a two-week febrile illness at 5:00 p.m. on Thursday, February 20, 1862. Willie was said to have ridden his pony during inclement weather shortly before he developed a high fever that waxed and waned for days. His disease, diagnosed as typhoid fever, progressed until he deteriorated, despite the best medical care of his day, including treatment with folk medicines, like Peruvian bark and beef tea.

By the mid-1870s, life expectancy for men and women in the U.S. was about 43 years. Infant mortality rate was about 195 deaths per 1,000 live births per annum, meaning that almost one in five children died before reaching the age of one (compared to 5.7 deaths per 1,000 during the first year of life in 2000). Mortality rate was probably higher during this same period on the frontier, where childbirths were often unattended by a physician; therefore, medical care was unavailable for life-threatening complications.

The demographic of the frontier was primarily rural. Outside of towns, livelihoods usually involved agriculture, ranching and mining. Life was very hard. Towns were often miles away, were small and usually did not have electricity, indoor plumbing, rapid communications and formal medical practices. While trying to raise the large families necessary to work their spreads, ranchers could be expected to lose 20 percent or more of their children in the first year alone, and probably more before adolescence. Sources of infectious disease were found everywhere, were usually unrecognized and, therefore, were poorly controlled. Lack of clean water, free of fecal (intestinal) contamination, was probably the greatest problem of all.

The presumptive cause of Willie Lincoln’s death, typhoid fever, killed thousands in the Old West. The disease is caused by the enteric (intestinal) bacteria Salmonella Typhi or Paratyphi. These bacteria are transmitted by the ingestion of food or water, contaminated with the feces of an infected person (sometimes a typhoid carrier without symptoms). About seven to 14 days after ingestion of the bacteria, the clinical manifestations of typhoid fever begin. The classic untreated patient goes through four phases of the disease, each lasting about one week. Virtually all bodily systems are affected.

In the first week, the clinical picture may be confusing and difficult to diagnose. A patient may have abdominal bloating and constipation, headache, cough, delirium and inability to urinate. Without the telltale “rose spots” on his chest, the diagnosis may be missed.

By week two, the patient may develop a characteristic green “pea soup” diarrhea, with full-fledged manifestations of raging madness and confusion, along with insomnia and pulmonary congestion.

In the third week, these symptoms continue, often exhausting the patient to near death.

Finally, in the fourth week, the patient has about a 30 percent chance of dying without effective treatment. If he recovers, there is up to a five percent chance that he may become a chronic, asymptomatic carrier of the disease.

If Willie had contracted typhoid fever today, early treatment with antibiotics, such as ciprofloxacin or azithromycin, would have given him up to a 99 percent chance of recovery. If vaccinated, he would have had up to an 80 percent chance of not contracting the illness in the first place.

Today we are blessed with effective antibiotic treatments or vaccines for most bacterial diseases. Children raised on the frontier, on the other hand, suffered and died from a scourge that could be eradicated today by nothing more than an “antibiotic shot in the behind,” and a trip to get ice cream, as a reward for bravery. In future articles, I will revisit this subject to discuss other diseases that struck “fear on the frontier” and carried away so many youngsters in the Old West.

By the way, assuming that the president’s son really had typhoid fever, I doubt that poor Willie became sick while riding his pony in inclement weather. Either his diagnosis was incorrect or a cook in the White House forgot to wash his hands after visiting the potty.